We all know how important oxygen is for us to survive. No oxygen, we’d suffocate. The same is true when considering dissolved oxygen (DO) levels in water. Fish need the oxygen, just as we do, and if there is less DO for them to uptake through their gills, the fish will have to compensate somehow. Think how the air is thinner at higher altitudes – there is less oxygen per unit of air. Humans who live in high altitude areas have adapted to this problem by developing larger lungs allowing for increased uptake of air, and thus, allows the human body to receive the amount of oxygen it needs. As we’ll see, some fish have come up with a similar adaptation to be able to survive in low DO conditions. Mt. Everest
Low oxygen areas, or hypoxic waters, occur both naturally and artificially. They occur naturally in areas where there is little photosynthesis, such as the dense papyrus swamps of Eastern Africa. However, hypoxia (and anoxia – no oxygen) is becoming a larger and larger problem, due to humans inputting pollutants in the water system. Eutrophication and ‘dead zones’ are becoming larger and occurring more often and in more places, and can cause massive fish kills, which can devastate industry and the community, especially those dependent on fish as their main source of protein. Interestingly, hypoxic waters can also serve as a refuge. If you’re a low-DO tolerant fish, and your predator isn’t, then you’ve got a place to hang out where you know you won’t get eaten. Not a bad place to hide if you can survive the low DO conditions. 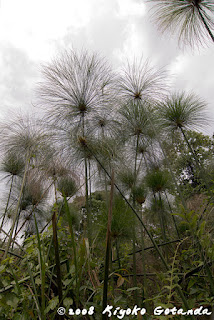 Papyrus Swamp
So the question then becomes, why are some fish species tolerant and others not tolerant? One adaptation that a particular type of East African cichlid, Pseudocrenilabrus multicolor, employs is to grow larger gills. The larger gills also mean different body morphologies. These fish, when reared under low DO, have larger gills, deeper bodies, and larger heads. But larger gills seem advantageous: why not have big gills all the time? There must be a trade-off of some type that would maintain smaller gills in high-DO conditions.
To explore this, we decided to measure swimming performance in P. multicolor. Body shape is critical in swimming performance, so perhaps this can give us an insight into what is maintaining the divergent body shape adaptations between different DO levels. We measured two types of swimming performance: critical swimming speed and fast-start swimming. Critical swimming speed (Ucrit) is a measure of sustained swimming ability. Basically, it’d be like running on a treadmill, with the speed increasing at regular time intervals, until you couldn’t run anymore. Fast-start swimming, or burst swimming, or startle response is a response used to evade predators or to catch prey. It’s characterized by rapid acceleration from what is called a C-start where the fish body bends into a C shape. Both types of swimming performance are affected by body shape, so we expected a difference in swimming performance between different morphologies in P. multicolor.

P. multicolor
To do this, used a split brood design and reared the fish under high and low DO conditions. We know that the fish have different morphologies, so we expected a difference in swimming performance between the rearing conditions of the fish. To our surprise, there was no difference in performance for either Ucrit or fast-start swimming. We know the morphologies were different, so how could fish with bigger gills and fatter heads swim just as well as more stream lined fish? 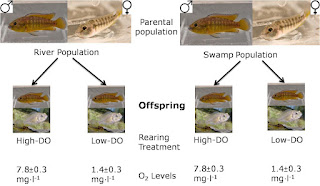 
For fast start swimming, it appears the low DO reared fish, with fatter heads and bigger gills, use what we call a double bend response. After a fish bends into the initial C-shape, the fish might either straighten out and go into sustained swimming, or it might engage in a reverse flip after the initial C-start. When it engages in that reverse flip, it is called a double bend, and double bend responses have high velocity and acceleration. Low DO reared fish engaged more often in a double bend than their high DO reared counter parts. Thus, we think low-DO reared fish compensate for the larger gills and fatter heads by engaging in that second flip to gain more speed in their fast-start swimming response. However, this could be a potential energetic cost, as the we expect that double bend responses are more energetically costly than single bend responses. This might explain why it's not always good to have larger gills - to compensate for the different body shape, fish have to invest more energy in their fast start performance to achieve the same performance as fish with smaller gills. For Ucrit, we think the larger gills might act as better ‘engines’ for the fish, so the increased gill surface area allows for enough oxygen uptake so low-DO reared fish can swim comparably to high-DO reared fish.

We had expected differences in the swimming performance between high and low DO reared fish, and to our surprise, the fish had converging performance, even though they were from divergent environments.
Citation: Gotanda KM, Reardon EE, Murphy SMC, Chapman LJ (2012) Critical swim speed and fast-start response in the African cichlid Pseudocrenilabrus multicolor victoriae: convergent performance in divergent oxygen regimes. Can J Zool 90:545-554
By Kiyoko Gotanda - April 18, 2012