Well, we’re recently back from McGill’s spring CEEB (Conservation, Ecology, Evolution, and Behavior) retreat, which was a blast.  It was held at McGill’s field station at Mont St-Hilaire:

That’s Lac Hertel, the lake that is rather curiously perched in the middle of the ring of hills that comprises the “Mont”.  (It rather looks like a volcanic caldera lake, but that is not the case; the Monteregian Hills are igneous intrusions, not extinct volcanoes, and the lake was formed by glacial erosion.)  The Gault House where the retreat was held is the building visible on the lake shore.  Nice digs.

Below, Krista Oke and Shahin Muttalib write a bit about the research they presented at the retreat; but first, trivia!  These questions were prepared by Gregor Fussman to test the wits of the assembled graduate students.  Answers are at the bottom of the post.

Question 1. What happened in which year?  (Match each lettered year with one of the listed events.) 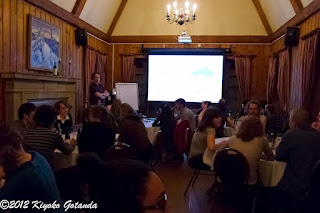 Profs and students are stumped by the trivia

Question 2. Whose equation?  (Match each lettered equation to its author.)

Question 3. The Latin name of which plant (which you would correctly assume that we consumed that evening) contains the letter ‘u’ six times, and contains no other vowels?

Question 4. The path of this traveller is suggestive of what? 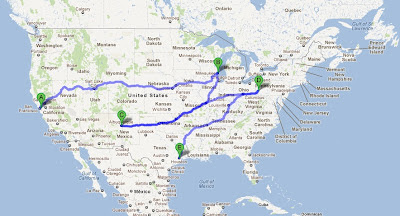 Question 5. Rank these bodies of water according to their actual area, from largest to smallest. 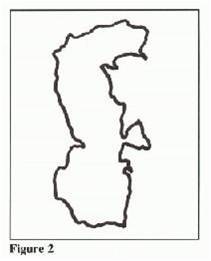 The degree to which gene flow can constrain adaptation is still an open question, and inferring causality from correlation studies between levels of divergence and levels of gene flow isn’t quite convincing enough.  Another approach is to measure selection in a site where we expect to find maladaptation: maladapted populations should experience higher selection. With this in mind, I tagged hundreds of fish over two winters and two summers in Misty Outlet and Misty Inlet, hoping to estimate natural selection on body shape. Since good selection estimates are dependent on capturing as many surviving fish as possible, I first estimated survival and recapture probability. It turns out recapture probability was higher in the outlet, so selection estimates are more precise for the outlet. Survival probability was lowest in the winter in the outlet, which is also where I found the highest selection intensity.  I am using two metrics to measure total selection intensity: one for overall selection due to the traits that I have measured, and a measure of relative selection taking into account selection on unmeasured traits. So while the outlet has higher overall selection in the winter, it also has more selection due to other traits. At the level of particular traits, I have found effects for fin positioning, head size, body depth and position of the pelvic spine. These are traits that contribute most to total selection intensity, show the strongest selection gradients, and also show selection in the expected direction, i.e.: towards the more adapted inlet trait values. This spring the stickleback team will be wading through the streams for one last season of data to confirm if selection is indeed consistently higher over the winter in the outlet. Watch out for those Misty Lake zombies!

The study of parallel evolution is important because it provides evidence for a deterministic role of natural selection in evolution and speciation, but parallel evolution is much more often inferred from field studies. Laboratory studies on parallelism have been relatively rare. Since plasticity could affect parallelism in several ways, the use of common garden studies could provide much insight into this process. A genetic basis for parallelism has been detected in some traits in one lake-stream stickleback pair, the Misty Lake pair, although plasticity was also detected. My MSc work asks whether there is a genetic or plastic basis to parallel evolution in three other watersheds on Vancouver Island. I currently have first generation lab fish growing in a common garden setup in our lab at McGill, but so far no results to report. I will be part of the field crew Shahin mentioned heading back to BC soon, where we will also be creating crosses to supplement the fish I have in the lab now. No one warned me about the zombies, though! 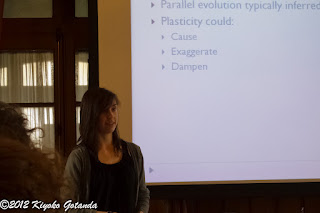 If you now have the warm, triumphant glow of a life spent immersed in the companionship of friends who love biology – but you also have a hangover and are in desperate need of a shower – then this post has given you a taste of what the CEEB retreat is like. Hey, at least we didn’t bring up meme-sex this time!

BUT, the trivia wasn’t quite over. A surprise last question moved the team rankings around, so a final challenge was issued. It was a combination of physical speed (running around the building twice), teamwork, memorization, and knowledge of your field. What was most interesting about it was that the team of the person running had to come up with a canonical paper in the field of ecology and evolution. The team would whisper it to the runner, and then they had to write it on a blackboard. This was all fine and good, but several interesting things came out:

1) We all know the authors and years, but do you know the exact title of papers that are important in your field?

3) How do you weigh the relative importance of different papers?

4) Did you know that marker caps, manipulated with excessive haste, can cause wounds?

It was an interesting and contentious final round. Of the articles the teams came up with, the citation counts for the articles ranged from 6 (Hendry and Gonzalez – Whither adaption?) to 12,528 (Fisher – The genetical theory of natural selection). Fisher’s ought to have been eliminated because it is a book, not an article, but that felt like too large a penalty, so the top two teams ended up splitting the prize: a bottle of rare Hendry wine.

Food for thought: at what point does an article become canonical or seminal in your field, and how might this be measured? H-index of the authors? Average citations per year? Total citations? First author awesomeness?

Until next year... hopefully our livers (and our marker-cap-inflicted wounds) will heal by then!

PS. Kiyoko apologizes for the publishing, subsequent dissapearance, and then reappearance of the post. In an attempt to add pictures, she managed to edit the draft to nothing. After much teeth gnashing, luck, and hair pulling, she realized Blogger plays nicest with Chrome. She should have known like begets like. Thanks to those who never close their browser windows and were able to send Kiyoko the text so she could ressurect this post. I think the original post has gone to hang out with the Misty Lake zombies. What fun!