Beaver snaps! No kidding. BEAVER snaps!!! I knew the Swedes loved their snaps (akvavit or vodka taken during a meal) and particularly enjoy adding all sorts of curious flavours (dandelion, anis, dill, wormwood, ...), but beaver musk? Turns out a small but motivated set of northern Swedes remove the musk glands from beaver and suffuse them into alcohol, yielding a decidedly strong-flavoured snaps. I had my opportunity to try Beaver snaps this week at Uppsala University as the opponent for a dissertation defense by Niclas Vallin, a student of Anna Qvarnstrom.
My job was to challenge Niclas for an hour or so on various aspects of his dissertation, which examined what happens when two closely related species come into secondary contact. Does one exclude the other – and is this exclusion regional or local? (Turns out that collared fly catchers aggressively exclude pied flycatchers – but only in some habitats.) Do their phenotypic characers diverge to reduce negative interactions – either ecological or reproductive? (Amazingly, he showed how this text-book example of “reinforcement” – divergence in mating traits to reduce maladaptive interbreeding – is actually not well supported; their color divergence is instead to reduce competitive interactions among males.) And how does this divergence occur? (The pied flycatchers move to a different habitat type and their young imprint on that habitat and return for breeding). Although I tried to destroy Niclas’ logic with my questions, I failed and he is now a PhD. I am starting to think, however, that newly minted PhDs might actually hold a grudge against their opponents and seek retribution. For his part, Niclas inflicted his first pay back by encouraging me to drink his father’s homemade Beaver snaps at the party after the defense. And Anna seemed to be in on the joke – giving me a 100 year old snaps glass that I clearly had to christen with essence of Beaver.
A committee member for the defense was Erik Svensson from Lund University. I had previously been an opponent for one of Erik’s students at Lund and Anna had been a committee member. Many jokes were made about which university was the better one – and so the three of us hoped to get together at Uppsala so we could make a fair comparison. (I will have to conclude that they are exactly equal in quality.) As a part of our visit to Uppsala, a “mini-symposium” on ecological speciation was held. As card-carrying and dues-paying members of the neoDarwinist club, it was quite curious that both Erik and I challenged ecological speciation – although on very different grounds. Erik’s main point was that a number of diverse groups (damselflies, for example) seem to show no evidence of ecological differences – and so must have radiation for other reasons, perhaps sexual selection. My main point was that a number of instances of adaptive divergence seem to be unsuccessful in generating strong reproductive barriers. Thus, Erik was pointing to the potential importance of non-ecological speciation (and non-adaptive radiation) whereas I was highlighting the likely frequency of ecological non-speciation (and adaptive non-radiation). Over beers later, we agreed to agree that we really have no idea of how often adaptive divergence, which is certainly common enough, succeeds in causing a full blown radiation (divergent selection might not be sufficient) or how often existing radiations are the result of adaptive divergence (divergent selection might not be necessary).
So what about that radiation of snaps into all those bizarre flavours: is it adaptive or non-adaptive? Adaptive radiation is often thought to be a process of filling available niches. In this sense, every flavour you could theoretically add to alcohol is a potential snap niche – so perhaps the various snap flavours satisfy this condition of an adaptive radiation. However, it is also true that those niches should yield high fitness and I am pretty sure that some potential snaps flavours would not be very successful. Like those “Bertie Botts Every Flavour Beans” of Harry Potter fame, there are probably more bad potential flavour niches out there than there are good ones. Then again, you don’t see vomit snaps or earwax snaps – so perhaps the niches that have been filled really are the high fitness ones – adaptive radiation indeed. So where does Beaver snaps fit in – a high-fitness niche or not? I don’t want to ruin the enjoyment of discovery for you and so you will just have to try it for yourself. Come to think of it, I have a beaver lodge in my backyard (it is Canada, after all) and a 100 year old Swedish snaps glass on the shelf. Come over any time and let’s see if we can ... 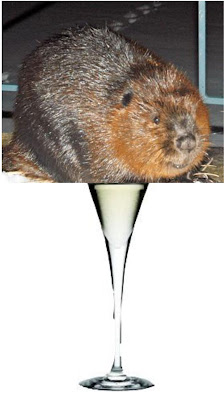