Changes in the long-term mean state of climate variables (i.e., climate trends) and their consequences on evolutionary and adaptive processes in wild species have been intensively studied for more than 20 years. Climate change models show that the variance of climate variables like temperature or rainfall may change much more dramatically than their means and will thus intensify both the stochastic component of selection and extreme selective pressures. In the figure below, the dashed line represents the distribution of a climate variable (or phenotypic optimum, as often interpreted in eco-evo or quantitative genetics models) with climate change (solid line draws the distribution before climate change). 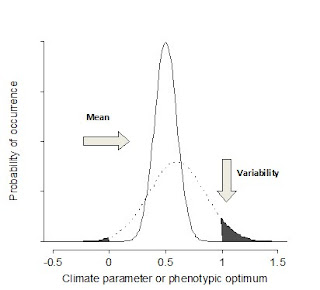 This intensification of weather extremes is emerging as one of the most important aspects of climate change, and the debate is expanding from an analysis of trends to an interest in extreme events such as periods of heavy rainfall or heat waves. There is compelling evidence that the frequency and severity of climate extremes have already increased in several regions. In the figure below, you can see a simple simulation showing the effects of an increase in the mean and variance of rainfall on the mean and variance of water flows in a hypothetical stream. The red line represents a 100-year flood (a flood with an expected recurrence interval of 100 years) pre-climate change (year 0), while the mean maximum flow over time is in blue. It is clear that with climate change we expect that what once was a 100-year flood will become, in fact, a 20-year flood. 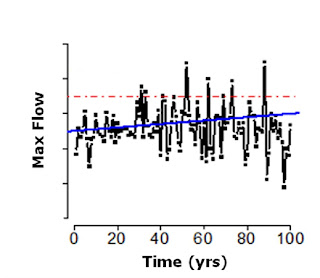 In ecological models, how to define extreme events is a thorny question. A climate extreme could readily be represented by the tails of a distribution for a particular climate variable, but what constitutes a climate extreme will be highly dependent on the available climate record. An extreme climatic event (ECE) can be synthetically conceptualized to include “extremeness” in both the driver (climate) and the ecological response. In the ecological literature, ECE are often called catastrophes: that is, events characterized by statistical extremity, rapid onset, and abruptness relative to the life cycles of the organisms affected.
Many adaptations in life-history, morphological or behavioral traits may be associated with catastrophes, but the extent to which these extreme events have been shaping traits and might buffer natural populations against the increasing variance of climate variables is largely unknown. At this point we (ecologists) all know that evolutionary processes need to be incorporated into management programs in order to minimize biodiversity loss under rapid climate change, right?
My colleagues and I used marble trout as a model system to explore both the adaptive mechanisms helping population recovery after collapses and the role of catastrophes in shaping the life histories of affected populations. Marble trout is a resident salmonid endemic in Northern Italy, Switzerland and Slovenia, but only a few populations survive nowadays. 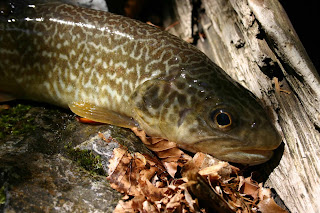 A conservation project started in 1993 in Slovenia thanks to the Biological Station of the Tour Du Valat, the Tolmin Angling Association, and a bunch of groups from different European universities. Ten pure populations have been discovered or created, and have been monitored with annuals sampling using a capture-recapture scheme. Marble trout live in harsh habitats which are frequently affected by punctuated catastrophes, such as storm-induced debris-flow and flash-floods, causing massive mortalities. Due to a debris-flow we lost the reintroduced population of Gorska in 2004.
Despite the absence of immigration, very low population sizes and genetic variability, these populations have persisted for centuries. This begs the question: what are the mechanisms allowing the persistence of populations affected by repeated catastrophes, and what are the consequences of repeated catastrophes in terms of evolution of life histories, genetic variability and phenotypic plasticity? According to theory, a range of traits can adaptively respond to recurrent catastrophes, such as: a) body growth rates, since they allow faster production after a population collapse, given the positive relationship between body size and fecundity; b) altered time of spawning; and c) morphological adaptations that can make fish avoid the floods or resist them, for example by staying close to the bottom of the stream bed using the pectoral fins. Moreover, density-dependent processes are also likely to shape life histories.
We focused our attention on body growth rates. However, the density-dependence of body growth and the large variations in population density often observed in stream-dwelling fish populations – even in the absence of catastrophic events – make the observation and disentanglement of the relative contributions of density and intrinsic body growth rates on the realized growth of individuals particularly challenging. We thus used an individual-based model to explore how density-dependent processes (survival and body growth) and different environmental conditions can create different selective environments for body growth rates. We investigated environments that are constant (with only demographic stochasticity), variable (including environmental stochasticity) and variable with the occurrence of unpredictable catastrophes (flash-flood events). In addition, we assumed that a negative (linear) relationship exists between survival rates and body growth. Model parameters were tuned for the marble trout population living in the stream Zakojska.
We found that in a variable environment with the occurrence of unpredictable catastrophes, there is selection for (relatively) fast growers, with a parallel maintenance of less variability in intrinsic body growth within the population. How does this selection for faster growers happen? Episodes of massive mortality trigger a chain of impacts leading to the selection of a limited range of intrinsic body growth rates in the affected population. Severe floods greatly reduce population size by flushing away or killing individuals, and the relaxation of density‑dependent pressure allows fish to rapidly increase their body size. In the years immediately following the episode of massive mortality, relatively fast growers can reach maturity earlier and, given the positive relationship between body length of females and fecundity, produce more eggs than slower growers. At the same time, the trade-off between body growth and mortality prevents the selection of very fast growers.
Our results showed that primarily flood events, not density-dependent processes, are driving the exclusion of slower growers from the population. The loss of slow growth traits through time could be considered to be local adaptation to the occurrence of high-amplitude stochastic events.
Among European countries, Slovenia has one of the highest frequencies of storms. Strong short-lived downpours or abundant several-day rainfalls can cause flooding, since the predominantly torrential character of watercourses means they rise very quickly. Data since the 1960s and preliminary explorations in our study area show a recent intensification, increased frequency and altered seasonality (autumn to spring) of catastrophic flooding events. The observed altered pattern is consistent with the predictions of the IPCC and of the European Commission’s Joint Research Centre (JCR). Evolution is usually thought to be a very slow process, something that happens over many generations, thanks to adaptive mutations. But environmental change due to anthropogenic causes such as climate change is happening very fast, and so adaptations, if they happen at all, may happen very fast.
To explore the effects of such rapid environmental change, we are now using an eco-genetic model to understand how the distribution of individual growth rates in a population of the freshwater salmonid marble trout evolves with an altered pattern of flood events, and whether the evolution of growth rates contributes to population persistence (evolutionary rescue). Stay tuned for our next results.
Vincenzi S, Crivelli AJ, Giske J, Satterthwaite WH, Mangel M in press. Selective consequences of catastrophes for growth rates in a stream-dwelling salmonid. Oecologia.
By Simone Vincenzi - October 17, 2011