Suskewiet! Finchy parallelisms between intended selection by domestication and unintended alterations of the strength of natural selection.

The dutch word in this title probably needs translation. “Suskewiet“ is an onomatopoeia (=a sound-imitating word) imitating the last part of the song of the male chaffinch (Fringilla coelebs), a small passerine bird in the finch family Fringillidae. Sorry, this is not entirely correct. “Suskewiet” only refers to the last part of the song as it is performed in Flanders, Belgium. Indeed, the chaffinch occurs all over Europe, parts of Asia, and North Africa, and there is considerable geographical variation in song. So “suskewiet” belongs to the repertoire of the birds’ Flemish dialect.

The male of the chaffinch.

Why would one need a specific word to talk about the last part of the song of Flemish chaffinches? This is a long story – but the picture below tells it all: 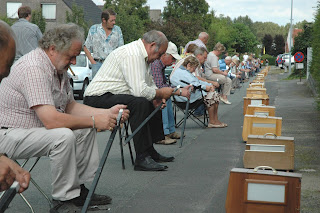 A “vinkenzetting”, or finch championship, in Flanders (Belgium).

Silence please! Here you see an important folkloristic competition going on, called “vinkenzetting” (finch championship) . Each of the boxes contains a male finch, and the championship is all about which finch makes this precise “suskewiet” sound most often. The men and women in the picture are holding a pole and a piece of chalk, to keep track of the number of suskewiet’s. The birds can hear each other, and their territorial nature makes them sing “suskewiet” as much as possible. The best finches sing more than 600 times per hour! The owner of the best finch wins a symbolic price, and the finch becomes more valuable. The tradition goes back to the Middle Ages (first mentioning of a finch game in 1595), and, despite or thanks to its weirdness, still persists. People practicising the game are called “vinkeniers” (“finchers”). They used to have a pretty bad reputation for illegal practises such as blinding the birds (up to the 1900’s it was thought that blind birds sing more) and depleting the wild finch population with rude catching techniques (up to the 1970’s). Luckily, the finchers are now organised in an official federation (http://www.avibo.be/home.php), controlling the games with strict regulations, using domesticated birds only.

Just like farmers who know how to breed cattle, finchers have an impressive knowledge about how to breed finches (including the inheritance of interesting traits such as song and colour). I’m not sure how much of the variation in song is heritable, but breeders do select fathers based on song quality. However, it is possible to teach a male bird the right song exposing them to “teacher birds” or audiorecords. Interestingly, a bird not singing the Flemish “suskewiet” is called a “francophone”, making a supposedly less elegant “suskeweiih” noise. Talking about Belgium (and Quebec), this sounds a bit politically incorrect. However, birds have a right wing and a left wing, so they are probably politically neutral.

Returning from the Galapagos field expedition 2011, it came to my mind that male Darwin’s finches use neither “suskewiet” nor “suskeweiih” in their songs. This is no surprise, as Darwin’s finches and the chaffinch are not related. Their songs are actually very different, even though they have similar beaks.

Darwin probably would not be surprised to read that people are weird enough to domesticate finches (such as chaffinch and zebra finch), applying his theory of selection by domestication. He also wouldn’t be surprised to read that Darwin’s finches have become iconic for his theory on natural selection. But he might be surprised to read that humans can alter the strength of natural selection in Darwin’s finches. During previous expeditions, the Hendry lab has been investigating this possibility in the seed-eating medium ground finch (Geospiza fortis) from Santa Cruz island, by comparing the morphology of a population living at Academy Bay, a human-impacted site, with a population living at El Garrapatero, a natural site. G. fortis birds from Academy Bay had smaller beak size than birds from El Garrapatero. This probably implies that the presence of humans has caused a shift in the finches’ resource distribution by the introduction of human food (such as bread, rice and potato chips) or new plant species into the environment, creating a selective advantage for finches with smaller beaks.

Chaffinches in captivity and Darwin’s finches in the wild thus seem to have in common that humans can influence which finches are going to contribute to the next generation. In the first case we talk about intended selection by domestication, in the second case about unintended alteration of the strength of natural selection. Is it exaggerated to describe the latter as “unintended domestication”?

So far, indications that humans might influence the evolution of Darwin’s finches have only been observed in a single species. However, as scientists we don’t want to rely on a single significant P-value - just as a fincher is not satisfied with a single “suskewiet”. During the 2010 and 2011 expeditions, we measured five additional species at the human-impacted and the natural site study site: the small ground finch (Geospiza fuliginosa), the large ground finch (Geospiza magnirostris), the cactus finch (Geospiza scandens), the vegetarian finch (Platyspiza crassirostris), and the small treefinch (Camarhynchus parvulus). So, let’s have a look at the potential human impact on the beak morphology of these species. P-values are not very suitable here - as finchers wouldn’t understand them. Luckily , “suskewiet” sounds like a significant result (P < 0.05), whereas “suskeweiih” sounds perfect for an non-significant result (P > 0.05) – and finchers do understand it. This opens opportunities for a new “suskewiet vs. suskeweiih”-based school in statistics. Here I show how it works, testing for differences in beak length, beak depth and beak width, respectively, in of each of the investigated species.

Oops, bad start. We hear three times “suskeweiih”, as none of the three beak dimensions differs significantly between the population at the human-impacted site and the natural site. Actually, small ground finches seemed to have larger beaks at El Garrapatero in 2010, but this difference disappeared in 2011. But let’s go on, maybe we are more lucky with the next bird.

That’s a nicer song! Beak width and beak depth differ significantly between the sites, beak length does not. Beaks were larger at El Garrapatero, and this was consistent across years.

Awtsch, another bad song – this must be a francophone finch. No differences between the sites at all. I will have to sell this bird to another fincher.

This song is a bit silent, but still elegant. There is a marginally significant difference for beak length, which was larger at El Garrapatero in both years. The other beak dimensions don’t differ.

Ha! Exactly the same song as the vegetarian finch. Beak width and beak depth differ significantly between the sites, beak length does not. Beaks were larger at El Garrapatero, and this was consistent across years.

So far so good. Now lets listen to the birds when they sing all together. It sounds harmonious because all suskewiet’s are generated by significantly larger beaks at El Garrapatero than at Academy Bay. So, the human-altered environment of Academy Bay seems to affect the bird species in the same way as observed previously for the medium ground finch. This makes sense, because the diets of these bird species partially overlap. A human-induced shift towards smaller and softer food items might thus select for smaller beaks in multiple bird species.

After the game finchers don’t go home early. They go to the local bar to talk about the championship and their finches, and to share their experiences or secrets. Science might benefit from this, so I might go there and ask them for advice. I'll probably start drinking to forget my disappointment in the ground finches, because both the large and the small one did not sing very well. In contrast, my cactus finch, small tree finch and vegetarian finch did a great job. This is changing my perspective. Small ground finches in particular are really keen on human food. Perhaps it does not affect the direction of selection in this species, because its natural diet might already be rather similar to the human food they can find. In contrast, I expected that cactus finches (feeding on cactus flowers), vegetarian finches (feeding on fruits) and small tree finches (mostly feeding on insects) would not bother about the introduction of novel food items by humans, and that their beak morphology would be conserved. However, my state-of-the-art “suskewiet vs. suskeweiih”-based statistical analyses suggested the opposite.

It is about time to bring back my finches to the aviary. It is worrying how rice, bread and potato chips might alter the live of a finch in the wild. In this sense there is sadness in all of the above songs. Let’s see how this is going to affect finch championships in the future.