Science from the edge – part 2: chew and spit, scratch and sniff.

In the previous instalment of this series, which basically amounts to papers I would like to have written, I discussed the groundbreaking experiments by Carl Puke and Richard Taylor on the effects of explosions of various sorts on fish of various types. Although it was beyond the purview of the typical eco-evo research, it was at least eco-evo-explo. In this second instalment, I would like to move from auditory and visual extravagance to olfactory and gustatory revelation. Eco-evo-gusto?

The first classic paper I want to discuss is by Richard Wassersug, now of Dalhousie University and, at the time, of UC Berkeley. Perhaps the paper I will describe, published in The American Midland Naturalist in 1971, facilitated the upgrade in institution. Much science is motivated by simple observation, in this case the fact that tadpoles of many species seem common and conspicuous in tropical rainforests. Why aren’t they eaten by the numerous predators? Perhaps it is because they taste bad – but this wasn’t known for these tadpoles. Clearly this conundrum calls for a predation experiment where the predators are forced to eat the tadpoles and their judgement then passed on the experience. I will let the author take up the story of “On the comparative palatability of some dry-season tadpoles from Costa Rica.”

“The mock predator in this experiment was a sample of 11 students and faculty... The volunteers were two females and nine males aged 22 to 36 ...” One wonders how many students were in the course but did not volunteer for this particular experiment! And in the true spirit of good scientific practice, enough information is provided should one wish to replicate the study. “The standardized tasting procedure included several steps. A tadpole was rinsed in fresh water. The taster placed the tadpole into his or her mouth and held it for 10-20 sec without biting into it. Then the taster bit into the tail, breaking the skin and chewed lightly for 10-20 sec. For the last 10-20 sec the taster bit firmly and fully into the body of the tadpole. The participants were directed not to swallow the tadpoles but to spit them out and to rinse their mouths out at least twice with fresh water before proceeding to the next tadpole.” 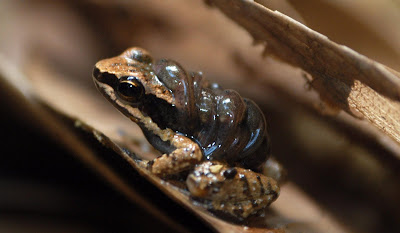 The first interesting result was that two of the nine volunteers in the experiment had to be eliminated as outliers because they either couldn’t taste anything or were outliers in finding the tadpoles less distasteful. Turns out they were smokers: why haven’t the smoking companies pick up on this benefit of their product? I can see the new label now: “Warning. This project may reduce your ability to find bad food distasteful.” A second important result was that the tadpoles differed in their palatability, with Bufo marinus (cane toad) being the worst and several other species sometimes being ranked reasonably high. However, it is hard to say more given that “No attempt has been made to put these data to any more rigorous statistical tests.”

If something like this can be done so effectively with taste – why not smell? Again, an observation sets the stage. Ever had to change the diaper of your sister’s or brother’s baby - nasty right? Indeed, much fouler than that of your own baby’s diaper, should you have one. If not, take my word for it. Or don’t, because we have a definitive objective controlled and replicated experiment. Writing in Evolution and Human Behavior in 2006, Case and coauthors asked mothers to smell the diapers of their own babies and other mother’s babies, with and without labels – with the labels sometimes correct and sometimes switched between babies. Turns out that other baby’s diapers are indeed more disgusting than your own baby’s – regardless of the label. The title says it all “My baby doesn’t smell as bad as yours: The plasticity of disgust.”

It would obviously be valuable to replicate these experiments. What about the taste of wet-season tadpoles? What about the aroma of your dog’s poop versus someone else’s dog’s poop? The opportunities seem limitless if not effortless. The truth is out there.