Ever read a paper and think “I wish I had written that”? I do all the time, but perhaps not in the sense you might think. Sure I would have liked to have written that book in 1859, or even those other ones in 1986 or 2000, but I am talking here about something a little less obvious. The ones I would really like to have written seem to be lost gems of science – the ones that have only been cited once or twice – or not at all. Of course, this means that the papers I would like to have written aren’t those that are influential but rather, as you will see, those that are fun and different and obscure for a good reason. I thought it might be a good use of this blog to bring some of these lost classics to the fore so that they can be appreciated or reviled by all as desired. And there are so many that it will take a few posts.

While doing graduate work in the School of Fisheries at the University of Washington, I happened to come across the intriguingly-titled “Use of dynamite to recover tagged salmon” written by Richard Tyler and published in 1960 as the US Fish and Wildlife Service Special Scientific Report 353. Now there is a title that immediately calls for further reading. It seems that the idea here was to put an array of dynamite charges in a stream and sit at the edge of the stream drinking beer and presumably smoking something while keeping an eye on the salmon swimming by. “Holy s**t Bob, there’s one with a tag, quick push the plunger.” BOOM. Then quickly, but probably not too quickly, they would run down to the stream to fish out the bits of fish, hopefully still attached to the tag. Perhaps they sometimes had to collect fish bits from up on the shore too – maybe they even sat under umbrellas to shield them from falling parts. Anyway, it turns out that “The experiments showed that dynamite is an effective means of killing salmon ...” No kidding. In fact, “they proved effective in the recovery of four tags.” Wow – now that seems like a business with a future. 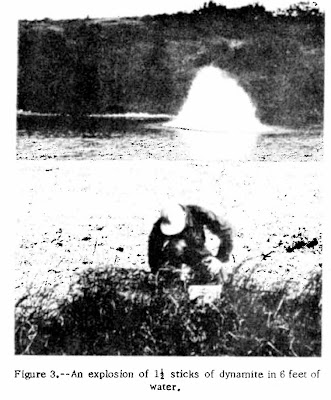 And, in what appears to be a recurring theme from that era of fish biology, I later came across “Experiments in Lake Vaner on the influence on fish of bomb-dropping” published in 1949 in the Report from the Institute of Freshwater Research Drottningholm. And if that doesn’t make you want to read more, consider that the author’s name was Carl Puke. Truth in advertising. So this time, the concern was that the Swedish Air Force used this lake for bombing practice and the local fishermen were upset because the quality of fishing was somehow not the same – not to mention the discomfiture that ensued at the sound of an airplane while out fishing on some lazy Sunday afternoon. To address the hypothesis that bomb dropping was the cause of fish declines, “various quantities of fish were placed into rather large (how’s that for precise!) steelwire cages ... at different distances ... from the spot selected for the explosion.” Then, “the bombs were dropped from an aeroplane or placed by hand ... and blown up electrically.” I am not sure whether this more considered approach would induce more or less adrenaline than the “quick push the plunger” approach of the previous study. However, in contrast to that previous work, “After dropping a large number of bombs from a plane, no unconscious or dead fish could be observed in the area concerned.” But perhaps this reflects more on the quality of the Swedish armory than the quality of the Swedish fish. Maybe everything really is bigger in America – although the size of the explosions in these pictures might suggest otherwise – maybe the Swedes were using trick photography, as one might expect from fishermen. 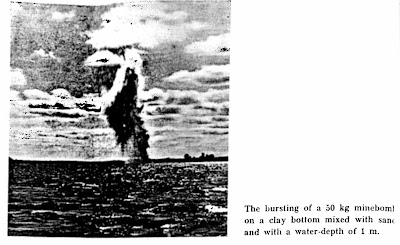 Writing this post has got me to thinking that maybe I can write this paper after all. Here we have two opposing outcomes vying for academic supremacy. Moreover, perhaps there was some animosity between the groups – given that Tyler did not in 1960 cite Puke from 1949. How could a funding agency not see the logic of solving an outstanding scientific problem once and for all: do explosions commonly kill fish or not and under what conditions? The only problem is figuring out what category of “invasiveness” I need to select on my pending Animal Use Protocol.

Ps. Those in the know argue that the recovery of four tags in the salmon study really was valuable – because these tags were placed on fish in the middle of the Pacific Ocean to determine where salmon from different rivers went when they were at sea – and whose fish were being caught in what parts of the ocean. The problem was that people sitting at counting stations along streams would see a tagged fish swim by with no way to recover it. Until they got the plunger, that is.