What did I learn today? Lessons from Leuven. 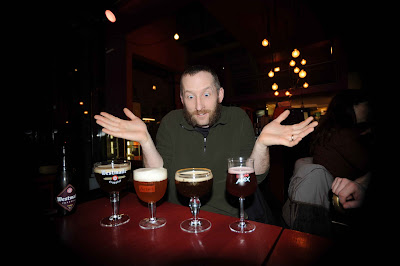 Andrew Hendry aghast at the apparent co-evolution of Belgian beers and glasses.
Every night at dinner, my family plays a game of “what did you learn that was new today.” Each of us has to come up with some new bit of knowledge, usually science-related, that emerged during the day. Often Aspen (7 years old) tells us about some new animal from a BBC video that we watched the night before. Usually Cedar (4 years old) tells us about how chameleons turn red when they are mad. She tells us this nearly every night and so it isn’t exactly new, but it is cool enough that we don’t mind. And then it comes to Heather or I. Sometimes we struggle to remember something new that we learned, which either means we knew a lot already or we didn’t pay much attention that day. This struggle has made me increasingly take mental notes of things that I learned on any given day to then relate to the family that night.
These past few days the task would have been easy. I have been attending a symposium on Eco-evolutionary dynamics, held at K.U. Leuven, Belgium. A host of talks from Belgians plus some visitors, as well as discussions in various restaurants and bars, has yielded a variety of cool new findings – new to me at least. For instance, I learned that only a few months of evolution in warm temperatures by previously cold-adapted Daphnia can make them perform as well – or better – in warm temperatures than Daphnia that had evolved in warm temperatures for centuries. I learned that the population size of southern elephant seals was probably upwards of one million individuals only a century ago. I learned that unrelated armoured catfish species, which have poison glands that deter consumption by predators, converge on similar color patterns in the same locations, presumably because this provides a more effective warning to predators (Mullerian mimicry). I learned that cuckoos, which lay their eggs in the nests of other birds, showed increasing convergence of egg shell color toward that of their host species (because the host would be less likely to reject the eggs) over the 20 years that a monk sampled nests in the early 20th century. I learned that wolf spiders in Galapagos have independently evolved similar species in similar habitats on different islands. And so on and so on. Too bad I can’t spread these observations out and use them over a few weeks of family dinners.
But it wasn’t only science. I also learned that Belgian bars keep a specific glass for each of the dozens of Belgian beers they serve. It seems that each brewery has promoted – and provided – a signature glass that (presumably) best suits that beer. I am sceptical. Are they really trying to convince us that the co-evolution of beer and glass is so perfect that every brewery has discovered the best glass shape for their specific beer – and that this shape is different for each beer? Or would Westmalle Dubbel taste just as good – or better – in a Rochefort glass as in a Westmalle Dubbel glass? I doubt that the matching of beer to glass is really that critical. Maybe it is instead like sexual selection: the match tastes no better than a non-match but the chooser (us) thinks a match is somehow sexier than a non-match. So, with that in mind, my goal tonight is to buy four different beers, pour each into the four glasses corresponding to those beers, and then subject myself, Joost Raeymaekers, and Katja Rasanen to a blind 16-glass taste test. Here’s hoping we make it through the night.
By Andrew Hendry - February 05, 2011