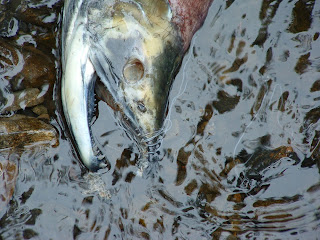 Empirical support for eco-evolutionary dynamics has emerged from several fish systems and a recent paper published in Heredity presents the case for diverse and strong effects in Pacific salmon (Carlson et al. 2011, Heredity 106(3): xxx-xxx). Several aspects of salmon biology make them amenable to the study of eco-evolutionary dynamics: they are philopatric (return to their natal sites to breed), anadromous (migrate between freshwater breeding and marine feeding grounds), and semelparous (die at the end of their first breeding season). Consequently, discrete populations can be subject to local selection pressures during their breeding season, presumably driving divergence in traits that can influence ecological processes. And such effects seem likely given their large adult body size and dense breeding populations that can change many features of the stream environment.

Building on earlier research that revealed the importance of water level and bears as sources of natural selection acting on breeding salmon, Carlson and colleagues (2011) explored the consequences of phenotypic change due to selection within a generation on salmon population dynamics, community interactions, and ecosystem processes. Despite a rash of recent studies documenting eco-evolutionary dynamics, little attention has been paid to the importance of this aspect of selection on ecological dynamics. Carlson and colleagues (2011) show how selection on body size simplifies age structure and strengthens cohort effects, which then alters population dynamics. They suggest two possibilities for how selection on salmon body size might then influence community interactions, namely through possible effects on bear energy stores (smaller salmon are less energetically rewarding, which might require increased foraging effort by bears) and aquatic insect community dynamics (smaller salmon dig shallower nests, which might differentially influence benthic invertebrates). Finally, the authors calculate the relative importance of selection (phenotypic shifts due size-dependent mortality) versus ecology (size-independent mortality) in determining the flux of salmon biomass across habitats. They report that selection can alter fluxes between habitats by up to 11% due to interannual variation in water level and up to 9% due to interannual variation in selection due to bears. The resulting combined effects of selection within a generation may have large cumulative effects on ecosystem processes. The authors speculate on such effects by comparing body size among nearby populations of salmon.

The authors thus conclude that phenotypic change within a generation due to selection influences ecological dynamics, and so should be considered within a complete eco-evolutionary framework. They also show that salmon are likely to be a good place to study eco-evolutionary dynamics.