Following the Dynamic Ecology poll on Controversial Ideas in Ecology, Jeremy Fox encouraged us to run a similar poll for evolutionary biology. We started by replicating the survey procedure of the ecology poll, wherein ideas were stated in a very simple fashion, and readers were encouraged to rank the idea on a scale from 1 (definitely false) to 5 (definitely true). Respondents were encouraged to abstain from a given question if they weren’t particularly comfortable answering it. Questions were chosen from a combination of our own interests and a series of suggestions in the comments section on an earlier blog introducing the survey. Promotion of the poll was through tweets from @ecoevoevoeco (and many retweets) in which various evolution societies were tagged – and the poll was up for about 5 days.

The poll had 532 respondents, of which 38.3% self-identified as faculty, 25.2% as postdocs, 31% as graduate students, and 5.5% as “other.” Given the relative numbers of people in evolutionary biology in these different categories, and the likely age-dependence of interaction with social media, I had expected more graduate students. Perhaps some younger scientists weren’t yet as comfortable providing their opinion on these ideas. I should also note that it is possible the survey was infiltrated by non-evolutionary biologists, or even non-scientists, but – based on various comments, and the responses – I think the majority of respondents were indeed evolutionary biologists.

A description of the results of the poll will appear in several posts. The present post will summarize and describe, and try to interpret, the distributions of responses. Future posts will consider patterns in comparison to the ecology poll and my own opinion on the various "controversies." 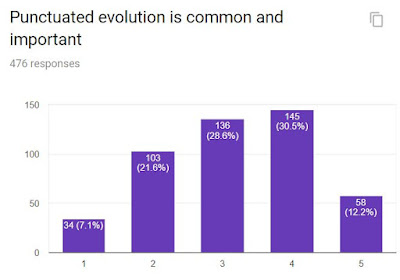 Punctuated equilibrium was most vocally espoused by Eldredge and Gould as an alternative to what they considered to be deterministic Darwinism. They argued that Darwin and his followers often considered evolution to be the slow, gradual accumulation of change, whereas – instead – most lineages remained phenotypically rather constant through time, except for brief periods of rapid change. They further argued that this punctuated PATTERN must reflect some non-Darwinian PROCESS, such as macromutation or species-level selection. The poll results suggest that most people were rather ambivalent about punctuated equilibrium and very few felt particularly strongly one way or the other. I speculate that the reason is that most people recognize the punctuated PATTERN of evolution, as indeed did Darwin and Simpson and many other classic evolutionary biologists; but, at the same time, they reject the need for a non-Darwinian mechanism. Of course, the question did not distinguish between these two options, but the next question allows some insight. 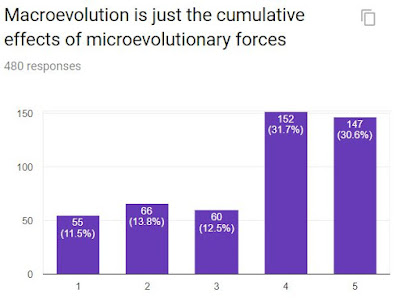 The statement here echoes one aspect of the punctuated equilibrium debate, where special “non-Darwinian” mechanisms were needed to explain the bursts of evolutionary change. More generally, some researchers studying macro-evolution (differences between major lineages, the origins of new traits, and so on) often assert that classic Darwinian natural selection is not sufficient to explain macroevolutionary trends. Here, however, respondents clearly felt that macro-evolution was simply micro-evolution “writ large” or perhaps, given the above responses, “writ in fits and starts.” Admittedly, the readers of this eco-evo-evo-eco blog are more likely to study micro-evolution than macro-evolution, and so we might here be seeing a bias of the community surveyed. 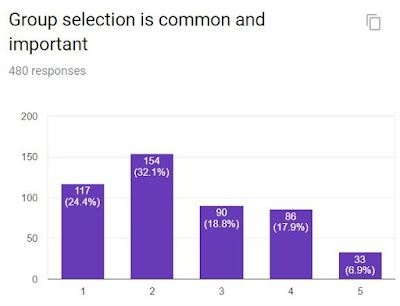 The idea that natural selection acts not just among individuals within groups but also among groups was roundly criticized by George Williams in his classic book, as well as by other influential evolutionary biologists. These critiques were so devasting that, basically, no one would invoke the process for decades. Recently, a number of studies have shown theoretically and empirically that the process can work, and it has been heavily promoted by David Sloan Wilson and others. It seems, however, that the group selectionists have not been very convincing. 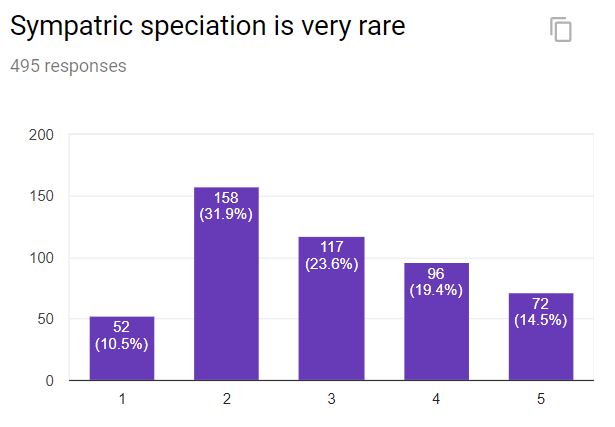 The idea that one species can split into two or more in a single geographical location, when gene flow starts quite high, is another concept that saw devastating critiques by authority figures, most notably Ernst Mayer. In the last 20 years, however, an increasing number of both theoretical and empirical studies have revived interest in the topic. Interestingly, the modern perspective seems to have made considerable inroads, with few people strongly accepting the statement that “sympatric speciation is very rare.” At the same time, very few people felt it was definitely false. 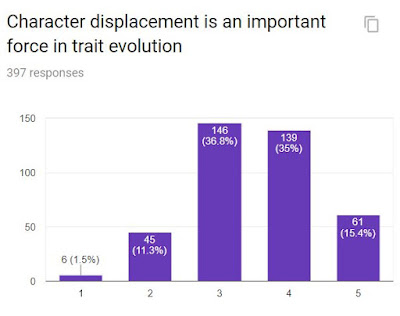 Two other classic debates in evolutionary biology, which also echo in ecology, relate to the importance of interactions. Character displacement is the idea that competition between species or between conspecifics for shared resources can drive evolutionary divergence in resource use and, hence, in the traits that facilitate that divergence. A series of classic papers have struggled with what, precisely, would be the evidence necessary to conclude that character displacement was occurring, sometimes generating a series of CRITERIA that "must" be met if the process is to be inferred. However, the survey suggests that few respondents strongly disagree that character displacement is an important force. I might suggest that this outcome arises because most people realize that the usual “criteria for demonstrating” cited by those classic papers place the bar too high. 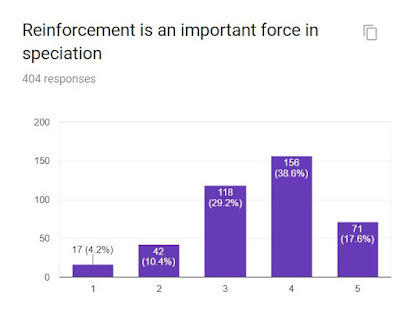 Another controversy surrounding competition is the extent to which it drives speciation, specifically through reinforcement: that is, selection to avoid maladaptive hybridization (or, more narrowly, against hybrids). Reinforcement is sometimes called “reproductive character displacement”, since the mechanism is similar.  Here the literature went back and forth between supportive and dismissive theoretical analyses and empirical “demonstrations.” Respondents here seem to have much the same view as for character displacement, suggesting that competitive interactions are generally considered an important force in evolution.

THE GENETICS OF ADAPTATION

The above debates are classic ones, which might now be fading into perceived irrelevance, or perhaps are considered “solved” to some extent. However, a number of new debates have emerged on which we also surveyed opinions. We were particularly curious as to how classic assumptions of adaptation have fared in the genomics era. 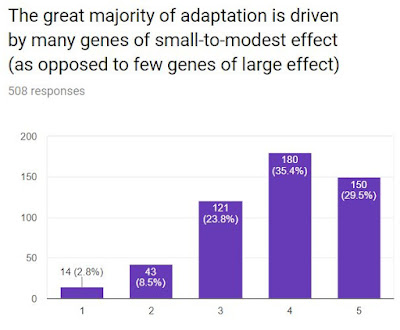 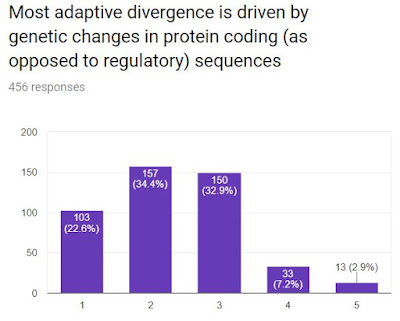 As opposed to the previous question, we can here see what appears to be a substantial shift in opinion from the classic interest in genetic changes occurring in protein coding sequences to genetic changes in regulatory regions. 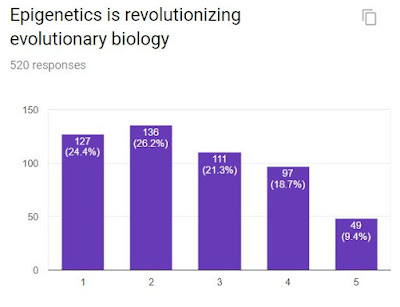 A rapidly expanding cadre of scientists are interested in genomic changes that do not involve changes in sequence: that is, epigenetics – most commonly DNA methylation. It has been argued by some that the study of epigenetics is revolutionizing genetics and will soon revolutionize evolutionary biology. The distribution of responses here suggest a wide range of opinion, with most not buying into the hype. However, nearly 10% of respondants agreed strongly that epigenetics is revolutionary – although perhaps they merely meant that lots of people are now studying it. Of course, empirical data on this topic is still so sparse that one might say we are all currently poorly informed on this topic. This statement, of course, captures part of the classic critique of the “adaptationist program”, most famously voiced by Gould and Lewontin. “Adaptationism” is a paradigm in which traits are generally assumed to be adaptive, having been shaped by selection; opponents of this perspective sometimes deride the hypotheses advanced by adaptationists as “just so stories” (after Kipling’s short stories like “How the Camel Got His Hump”).  Interestingly, opinion here is bi-modal (as were responses to the original critique), with few people being indifferent. Personally, I am rather surprised that the Gould–Lewontin view still seems quite strongly accepted in the evolutionary biology community. 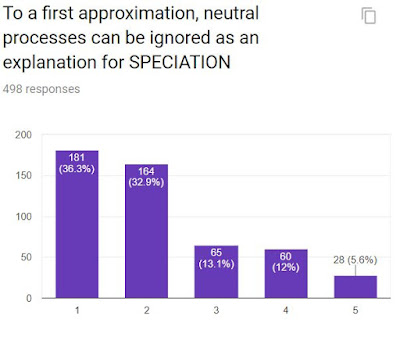 The last 20 years of interest in “ecological speciation” and “adaptive speciation” seems not to have strongly swayed opinion, in the sense that many evolutionary biologists still feel that neutral processes need to be considered in speciation. 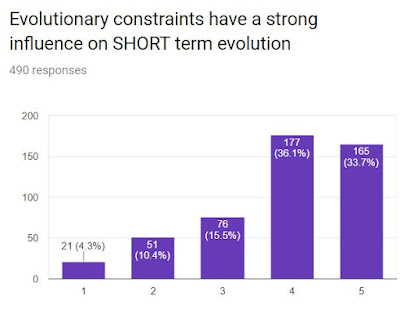 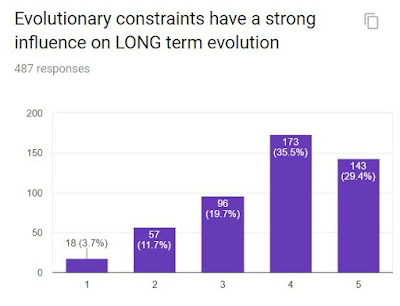 I imagine that most evolutionary biologists agree that constraints are important on both short- and long-term scales. However, by separating the two questions, I had expected to differentiate people concerned with immediate responses to selection being altered by the G-matrix from people concerned with structural and physical constraints preventing certain morphologies. Yet the response was generally the same – most people feel that constraints are important. 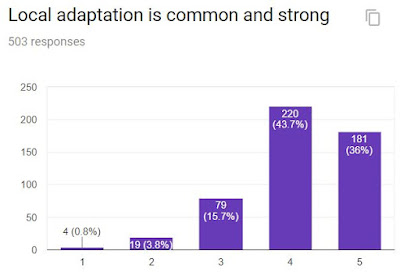 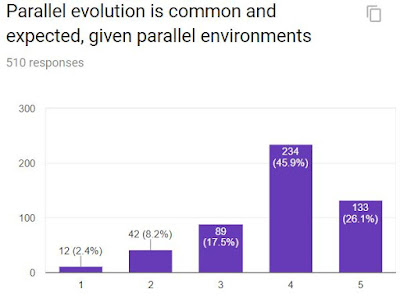 Given the above responses suggesting that neutral process should be considered, and that constraints are common, I was very surprised to see that respondents here went with the classic view of local adaptation being strong and deterministic (parallel). I guess a fair interpretation would be that while most respondents think that natural selection is the most important force, its influence could sometimes be modestly altered by neutral processes and constraints.

That's all for now. Stay tuned for more results and interpretation.