What have you done for me lately?

However, a few years ago, I encountered a pretty weird version of this “what have you done lately” approach to evaluation. I was an external member of a committee seeking to hire a professor. During the meetings to evaluate candidates, one other member of the committee used, as a key criterion, the trajectory of citations in Google Scholar to judge whether a person was “declining in influence”. I found this criterion really weird as a person with few citations in recent years could rank higher than a person with tons of citations in the same year. (Of course, other valid reasons exist to not weight citations highly in evaluations in general.)

And then I looked at my own Google Scholar profile. Lo and behold, I was “declining in influence.” OK, fine, whatever: my happiness does not depend on the trajectory of my citations. 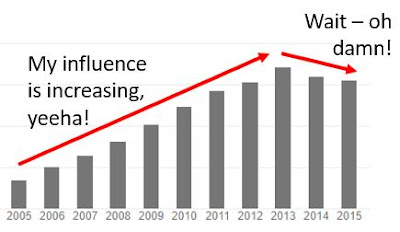 Now, a few year’s later, however, it looks like this. 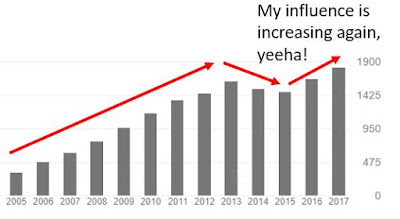 Now that I am on the upswing again, I am more convinced than ever of the uselessness of the trajectory of citations for evaluation. Here are two key reasons:

1. As citations always lag publications, the period of my declining influence was – presumably – precisely the time I was publishing papers that would prove to be increasingly influential.

2. Any career is likely to involve ups and downs in year-to-year citation rates, which clearly do not reflect any real trend in “influence.” 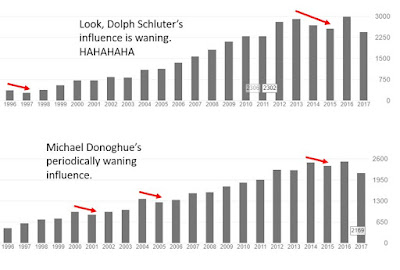 In short, while I agree that old less-than-active folks shouldn’t continue to take funds and space from more up-and-comers, citation trajectories is NOT a way to make such assessments. 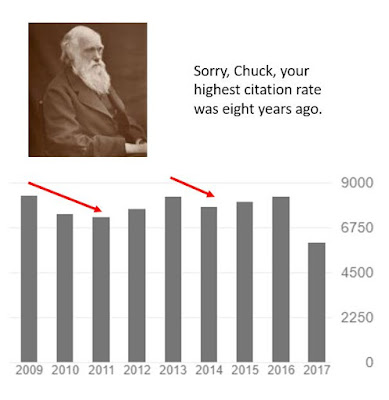