The Eco-Evo Evo-Eco blog site has had a number of interesting contributions (e.g. rapid evolution and big apple) about “evosystem services” – broadly defined as all the benefits to society from evolutionary processes (Faith et al 2010). Our bioGENESIS group introduced this term to set up a contrast with the conventional term “ecosystem services”. After all, why should we (we asked) refer only to benefits from healthy ecosystems, when we equally could be talking about the benefits from healthy evosystems?

As an evosystem service, biodiversity and its option value therefore is a nice interplay of past, present and future. Past evolution creates a storehouse of “features”; presently we place some value on the benefit of having biodiversity’s maintenance of options, knowing that future generations then will continue to discover unanticipated benefits and uses.

The “past” does not have to be that long ago

The new home of bioGENESIS, Future Earth, focusses on human-earth system science and sustainability. We wondered initially how evolution and biodiversity conservation fit into conventional “earth system science” (for discussion, see e.g. Faith and Richards, 2012). It is clearer now that there is a good fit. Evolution is a key Earth System process, and one way to look at the human-earth system is that this system operates with a time-lag – evolution in the past has created biodiversity and, from humanity’s point of view, this is a rich heritage or “storehouse” that society now continues to harvest over time. Of course, humanity also is rapidly foreclosing its options through human-caused loss of biodiversity. How we deal with all that is central to sustainability.

This evolutionary perspective on human-earth systems is even more interesting because evolution can be rapid, it may well be directly or indirectly influenced by humans (Hendry et al. 2017), and it may or may not promote human well-being. Such contemporary evolution importantly not only may support ecosystem services, but also support global biodiversity option values, as illustrated by the work of Bellon and colleagues (and discussed in Faith et al 2017).

Wrapped up in that discussion (and in Rudman et al 2017b, which is a reply to our response) are two concerns about how our broad definition extends beyond ecosystem services to include biodiversity option values–

I’ll discuss these in turn.


I can see why a more constrained definition of contemporary evosystem services might be tempting. Rudman et al’s blog contribution about their TREE paper (the “MS” below) presented more on their rationale. They found support in Andrew Hendry’s recollection that we:

I think the Andrew Hendry blog quote above therefore does not capture the whole story – in fact, in his early blog post here on evosystem services, Andrew noted that not only are ecosystem services a product of evolution but also that –


“evosystem services are so much more because they recognize that biodiversity has current or potential future values to humans that we don’t know about yet and can’t yet envision.”

So, all that supports the little diagram that appears in our TREE response (re-drawn below):

Rudman et al (2017a) had characterised our broad interpretation of evosystem services as “a concept too meta-scale to measure”. But the individual arrows in this figure are measurable. For example, the assessments of on-farm conservation sometimes measure the option values of contemporary evosystem services (blue dotted arrow). Similarly, the maintenance of options resulting from past evolution (blue dashed arrow) is measured using “phylogenetic diversity” (PD).

2. Definitions, and stories about definitions

In their reply to our response in TREE, Rudman et al. (2017b) defended their ecosystem service-focussed definition, arguing that our notion of biodiversity option value did not correspond to something produced by contemporary evolution. They properly referred to Faith 2017 as providing our definition of option value, but then quoted it this way:

“’option value refers not only to the unknown future benefits from known units of biodiversity, but also to the unknown benefits from unknown units.’ Using this definition, Faith et al. focus on the importance of maintaining genetic diversity to maintain ‘future options’ provided by living variation. …. we would not classify these option values as contemporary evosystem services because they are not the product of current rapid evolution”

Faith (2017) did not state that definition, which would on its own have given the impression that the benefits were in the future and so could not be a product of contemporary evolution. This can be cleared up by looking at the full paragraph in Faith (2017) from which Rudman et al’s quoted sentence was plucked:

“the best argument for what we call the option value of biodiversity is that we see many currently beneficial units, and maintaining a large number of units (biodiversity) for the future will help maintain a steady flow of such beneficial units (see also the “storehouse” analogy in Faith et al 2010).  In accord with this idea, the Millennium Ecosystem Assessment (MEA; 2005a: 32) described option value as: “the value individuals place on keeping biodiversity for future generations”. Option value refers not only to the unknown future benefits from known units of biodiversity, but also to the unknown benefits from unknown units. Biodiversity option value therefore links "variation" and "value": providing a fundamental relational value of biodiversity reflecting our degree of concern about benefits for future generations.”

Thus, the sentence prior to the one quoted by Rudman et al points to a version of the actual definition. Individuals (or society) gives some value to that benefit biodiversity provides in maintaining options for the future. As Faith (2017), and our response to Rudman et al (2017a), made clear, the value/benefit is now (“the value individuals place on keeping biodiversity for future generations”) and, as illustrated in Bellon’s work, this benefit may be produced by contemporary evolution.

The pre-history of a term

The discussions about evosystem services and biodiversity option value, arising from the Rudman et al papers and bioGENESIS responses, have been constructive. But this also recalls for me the widespread resistance (reviewed in Faith 2017) to the idea that biodiversity has its own direct benefit, maintenance of options, that goes beyond any benefits through support of ecosystem services. Indeed, Faith (2017) traces a popular re-writing of the history of “biodiversity” in which the ecosystem services movement supposedly forged links for the first time from “biodiversity” to human well-being (with biodiversity supposedly only having intrinsic value prior to that).

Faith (2017) also laments that this story-line sometimes is propped up by re-casting “biodiversity” as practically any aspect of ecology that supports ecosystem services. A special case of that problem concerns PD (see above), proposed as a measure of biodiversity and its option value at the regional/global scale (Faith 1992). But now many ecosystem services papers state that Faith (1992) defined PD as the phylogenetic diversity of a community.

Uncovering a “pre-history” can be fun. I have relied on Web of Science and also some previous excellent reviews (including Mazur and Lee, 1993 and Farnham 2007). It appears that a suite of uncovered papers collectively can document an emerging idea well, but any one of the papers may not have been cited much. Indeed, some of the early significant papers are “unmarked landmarks” that raise mysteries.

I really liked a little 1974 paper in Science that reported on an important discussion meeting where participants called for “an Ethic of Biotic Diversity” in which “diversity is viewed as a value in itself and is tied in with the survival and fitness of the human race”. The paper warned that extinction “threatens to narrow down future choices for mankind” (see Faith 2017).

The pdf of that “news and comment” page in Science only had the signature “C.H.”: 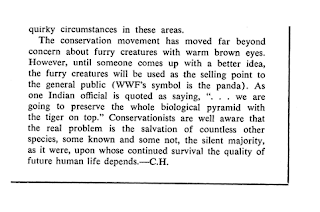 I think I will stick with the C. Haskins attribution


(and raise this challenge to the reader – can you nominate other papers as “unmarked landmarks” that deserve to go from (say) 0 citations to 1 or more?).

Meanwhile, I noted recently that Mazur and Lee also cited another relevant paper for my pre-history of biodiversity - Iltis (1972). H. H. Iltis, who died this past year, was professor emeritus of botany at the University of Wisconsin–Madison. He was best known for his discoveries in the domestication of corn, but also wrote broadly about environmental matters. His 1972 paper called for society to “preserve sufficient diversity of species and of ecosystems” because “we will never reach a point where we shall know which organisms are going to be of value to man and which are not.” Again, we see an early paper that neatly captures the fundamental link between biodiversity and maintaining options for the future.*

*see also the Iltis (1967) Bioscience paper that is 50 years old this year. He argues “life's diversity is threatened with imminent destruction, that in 20 or 30 years it will be all but over for this exuberant biotic wealth”.

Iltis (1972) is another unmarked landmark paper -  Web of Science reports it has been cited only 6 times. In any case, while my pre-history task is not complete, we already can say that by 1972 (45 years ago), biotic diversity itself was promoted as a benefit to be valued by society, and the nature of this benefit to society was the maintenance of options.

I like the phrase “maintenance of options” as a reference to biodiversity’s contribution to people.. As our TREE paper (Faith et al, 2017) on contemporary evosystem services noted, the Intergovernmental Science-Policy Platform on Biodiversity and Ecosystem Services (IPBES 2017) recently recognised “maintenance of options” as a distinct category of “nature’s contributions to people” (NCP).   NCP is a useful shift from conventional ecosystem-services speak. While IPBES (2017) stated that its list of 18 NCP “are generally closely associated with the concept of ‘ecosystem services’”, the “maintenance of options” NCP is the important departure. I hope that IPBES assessments now will implement measures for both the blue-dotted and blue-dashed lines in our figure.


Faith, D.P. (2017) A general model for biodiversity and its value. in The Routledge Handbook of Philosophy of Biodiversity (Eds. J Garson, A Plutynski, S Sarkar)


Iltis, Hugh H. (1972) Shepherds Leading Sheep to Slaughter: The Extinction of Species and the Destruction of Ecosystems. The American Biology Teacher, 34, 201-205+221.


IPBES (2017) Update on the classification of nature’s contributions to people by the Intergovernmental Science-Policy Platform on Biodiversity and Ecosystem Services.  IPBES/5/INF/24


Mazur, Allan and Jinling Lee (1993), Sounding the Global Alarm: Environmental Issues in the US National News. Social Studies of Science, 23, 681-720