Sexism in science has been discussed for as long as I can remember being a part of science. Until I joined social media, however, nearly all of the discussion I can remember was related to hiring. In particular, considerable attention is always paid to trying to increase the representation of women faculty through the hiring process. These efforts are manifest as encouraging women to apply, making sure a number of qualified women are interviewed, and giving preference to women in situations of relatively equal qualification and ranking.

Since I joined social media, the range of topics and contexts, and the frequency with which they are discussed, has become much more apparent to me. In particular, a lot of scientific discourse on Twitter and Facebook is focused on gender equality and fairness and opportunity in science. I have not been particularly active in these discussions, as I might have been by – for example – tweeting or retweeting the many comments about gender biases in academia.

Probably the main reason for not being too active here was that I didn’t want to seem opportunistic or casual or unthinking in any advocacy. Rather, I wanted to restrict myself to a few posts that might thereby indicate some sincerity.

As time has gone on, however, I had a growing sentiment that it would be appropriate and valuable for me to say something more specific and focused on the topic. The final impetus that motivated this post was my current geographical location – I am on sabbatical at UC Berkeley, where a number of high-profile sexual harassment cases have recently come to light. In particular, the “resignation” (presumably under pressure) of Dr. Geoff Marcy, following exposure of the university’s cover-up of his violation of their sexual harassment policy, hit close to home. The reason was that – just before the allegations were made public – I happened to have lunch with a bunch of scientists, including Dr. Marcy. At the time, I had no idea of the allegations, nor of the cover-up, nor of the resignation that would soon follow. It was distressing to realize that I had no idea of the overt sexism of someone with whom I was interacting.

I am pretty certain that I am not overtly sexist. However, reading various articles highlighted on Twitter has made it clear to me that sexism is not just overt but also subtle and subconscious. That is, a professor might treat men and women differently without realizing it – unless it is specifically pointed out to them. Instances of my own potential subtle sexism have been pointed out to me before, most publicly in the tweet below about a symposium I organized. I therefore decided to undertake my own “subtle sexism self-evaluation” by assessing potential quantitative indicators of how I interact with women in science.

Was just pointed out to me that this CSEE symposium is all dudes. What's up with that? #evol2012
— Daisie Huang (@daisieclickie) July 8, 2012


Do I collaborate more with men than with women?

To answer this question, I tallied the male and female coauthors of every paper I have published (a person was counted each time I published with them – so the same person can be counted a number of times). Of my 490 total coauthors, only 142 (29%) were women. This proportion differed dramatically from before to after my appointment as a professor (see graph below). Most dramatically, only 1 of the first 17 papers I published had a female coauthor. Considering all papers before I became a professor, only 10% (8 of 79) of my coauthors were women. 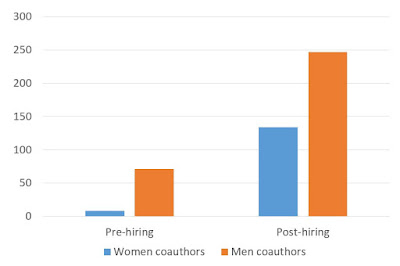 Considering all papers after I became a professor, 33% (134 of 411) were women, and at least one woman has been an author on each of my last 9 papers. Why the shift through time? One possibility is that my graduate work was in a Fisheries department, a field traditionally dominated by men (e.g., < 30% of “fisheries” professors are women: figure below), whereas my faculty position is in Biology, where the sex ratio is less biased (although not in my department). Another possibility is that participation of women in research is increasing through time. A final possibility is that I altered my behavior to specifically collaborate more with women – although I don’t remember consciously doing so.

Of course, even my post-hiring rate of 33% women collaborators could still indicate a bias, depending on the proportion of women among peers and trainees in my field. Let’s start with graduate students. Since starting as a professor, women have comprised 60% of my MSc students, 47% of my PhD students, and 30% of my postdocs (total across all three categories = 46%). And what about my peers? Schroeder et al. (2013) reported that 22–39% (depending on career state) of professors in evolutionary biology were women.

My self-evaluation of these numbers is that I do not show any apparent bias when it comes to collaboration with my peers – other professors in my field. However, why are 46% of my students/postdocs women but only 33% of my post-hiring coauthors women? To further consider this apparent discrepancy, I divided all my coauthors into students/postdocs versus peers, revealing that 42% of my student/postdoc coauthors were women – about the same as their frequency in my lab.

However, the data do show at least one situation involving very strong bias. In particular, I have been a part of two “perspective-type” papers with more than 15 authors. One of these had only 1 female author out of 16 and the other had only 5 female authors out of 15 – and I was first author on both papers! However, the participants in these two papers were determined by participation in the workshops that spawned the papers – and I didn’t organize either of those workshops or invite people to them. I merely took the lead on writing the papers that came from them. Regardless, it seems that I could do a better job of encouraging participation of women in the working groups that generate such papers.

Do I invite more women than men?

Above, I noted a bias toward men in large working groups that generate big “perspective” papers, while also noting that I was not in charge of inviting participants to those groups. Thus, I wanted another way to assess my own possible bias in inviting attendees. Indeed, my initial thinking was that I am likely to have such a bias given the earlier-noted tweet about a symposium I organized where all 6 speakers were men. Moreover, Schroeder et al. (2013) noted a strong bias toward men in invited (as opposed to contributed) talks at the European Society of Evolutionary Biology (see figure below).

To address my potential “invitation bias” most directly in the currency that matters most, I tallied the invited authors of every published journal special issue that I have edited where I was at least partly responsible for the invitations. This proved a bit hard to parse because several people were often invited to work together on the same paper, and the invited person sometimes then invited someone else to be lead author. So – to be as simple as possible – I just tallied first authors of the 61 papers published in the 5 special issues made up of invited participants. Of the 61 first authors, 20 (33%) were women – about the same as the proportion of women faculty members in evolutionary biology, and somewhat higher than the proportion of women invited to speak in symposia at ESEB. But that “solidly average” outcome doesn’t mean I can’t do better.

A particularly insidious form of sexism in science that I recently became aware of (and tweeted about) was the use of different adjectives in letters of recommendation. As shown in the Wordle above, letters of recommendation (compiled from a job search) for men tend to use "standout" words such as fabulous, bright, exceptional, remarkable, extraordinary, and so on; whereas letters for women tend to use "grindstone" words such as conscientious, dependable, meticulous, hard working, and so on. I found this shocking (although some observers pointed out that the differences in the wordle appear greater than those reported in the original paper), and so I wondered if I had the same subtle bias. So I took every letter of recommendation I have written for graduate students or postdocs or colleagues (one – the most recent – per person), divided them into letters for men (N = 16) and women (N = 14), removed many uninteresting words (e.g., “student,” “PhD,” “ecology”, “evolution”) equally from both, and Wordled them. Here is what I came up with.

I therefore also searched for the standout and grindstone words that appeared in the "shocking" wordle comparison I tweeted earlier. I tend to use these words rarely - probably because they don't sound sincere and, in fact, I tend to use them twice as much for women than men. However, this got me to wondering about "great" and "good" again. So I searched for those and found a HUGE bias. I used "great" 41 times for men and only 7 times for women, whereas I used "good" 16 times for men and 25 times for women. Looking closer, I see that I used "great" a bunch of times in one sentence as a literary device. "As a final key observation, he is the most collegial person I have ever met. He is a great person, a great collaborator, a great friend, a great colleague, a great … well … everything. Every loves him. I can honestly say I have never met any who had a single bad, or even equivocal, word to say about him. In fact, everyone professes great admiration and affection for him. He is, quite simply, a wonderful person." But even excluding this exceptional case, I do seem to have a bias with respect to the standout words "great" and "good", which I clearly need to be aware of. 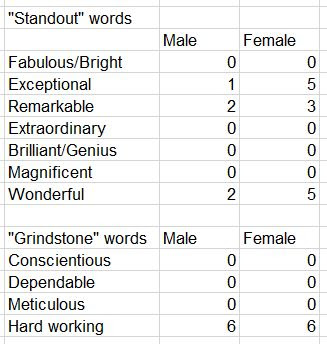 Where should I go from here?

I am partially reassured by my “subtle sexism self-evaluation” in that none of the indicators appears particularly egregious. Nevertheless, I can see several areas for improvement. I can work to achieve a better balance of participation in working groups, and I can pay attention to my use of “great” vs. “good” in letters of recommendation. Moreover, there are many other contexts where my subtle sexism might be apparent but that I can't easily quantify based on hard data. Many other ways exist to improve opportunities and equality for women in science - and many of these I can implement myself. I will save more details for another post as this one is already quite long but I also hope that others reading this post will provide suggestions below. Finally, while this post has focused on sexism in science, a similar evaluation would be useful for minorities and other under-represented groups in science.


My own "subtle sexism self-evaluation" was very interesting and revealing and I encourage everyone to conduct their own. It took me about a day (much of it spent on the letters of recommendation) and the outcome was rewarding and motivational.


It has been argued that women are done a disservice by being asked to participate equally in various committees and working groups when they are not equally represented in the field. As a result, women could end up spending more time on external activities that take their time away from research. With the context of working groups and symposia, however, any invitee can say no if they wish to (and this is common - Schroeder et al. 2013), and so it is not exploitative for an organizer to work toward equal representation.

The word "sexual" appears in the wordles because some of my students – coincidentally more women than men – studied the process of sexual selection in guppies.
By Andrew Hendry - April 20, 2016