What is the standard modus operandi in adaptation genomics? We pick populations occurring in habitats expected to be selectively different, perform marker-based genome scans, and develop narratives based on differentiation profiles (slightly simplified). And we are generally willing to believe these interpretations without evidence that genomic differentiation is ecologically consequential, or at least without a direct estimation of these consequences… wouldn’t it be interesting to know more about the fitness correlates of the patterns our genome scans reveal?

Well, at the end of the plasticity experiment, it seemed to us that many lake fish were missing from the enclosures, whereas the local stream (control) fish still seemed to be around. But the study design of the plasticity experiment precluded more than speculating about differential survival between the populations, so we decided to test this formally in a new experiment. Fortunately, we could reuse the enclosures (which were hard to build; Fig. 1). However, we wanted to perform the new experiment using lab-reared individuals to test for genetically-based fitness differences, hence breeding a fresh experimental stickleback cohort in the lab still took a year of work. Once the new lab cohort was generated, we released an equal number of juvenile lake fish (i.e., foreigners), stream fish (locals), and their F1 hybrids into the stream enclosures, allowing them to compete, and tracked survival over more than half a year.

Fig. 1: Dario during enclosure construction (in his irresistible wet suit from the 80s), the resulting product, and maintenance work.

The outcome of the experiment was as clear as in a textbook on local adaptation: in all three replicate streams, the local stream fish survived better than the foreign lake fish, and survival of the F1 hybrids was intermediate. Intriguingly, this even held in the one replicate in which the stream population was known from our genomic work to exhibit negligible overall genomic differentiation (Fst = 0.005) from the lake population because of strong gene flow (Fig. 2). However, genomic differentiation is heterogeneous, hence it appears that moderate allele frequency shifts (Fst up to 0.67) maintained at a number of spots in the genome are sufficient to cause strong adaptive divergence. 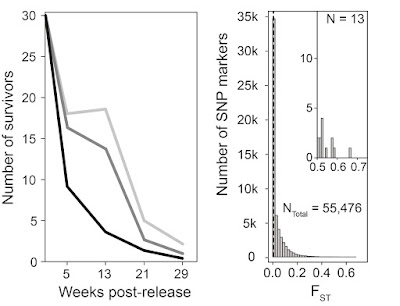 Fig. 2: Survival of stream (light gray), lake (black), and F1 lake-stream hybrid stickleback (dark gray) over 29 weeks, averaged across the replicate field enclosures at one experimental stream site (left). The resident population in this stream displays trivial overall genomic differentiation from the adjacent lake population, although the distribution of Fst values across >55k genome-wide SNP markers indicates more substantial divergence in many regions of the genome (the tail of the Fst distribution is enlarged in the insert).

The main lesson to us was that in the presence of heterogeneous genomic differentiation between populations, weak overall baseline differentiation does not imply weak adaptive divergence – many small peaks, reflecting highly incomplete allele frequency shifts, really make a difference. Of course this is what we are generally assuming in genomics, but it is reassuring to have this quantified and confirmed. Moreover, we now know for sure that adaptive divergence, by causing selection against migrants and hybrids, is a potent reproductive barrier in lake and stream stickleback. I expect this barrier to be devastatingly strong in those lake-stream systems in which phenotypic and genomic divergence is way more striking than among the populations from the Lake Constance watershed (e.g., some lake-stream pairs from Vancouver Island, Canada). If interested in this transplant study, see Moser et al. 2016, JEB: Fitness differences between parapatric lake and stream stickleback revealed by a field transplant. http://onlinelibrary.wiley.com/doi/10.1111/jeb.12817/abstract
By danielBerner - February 03, 2016