RESOLUTION – I will get a faculty position

I have already written two posts about “How to Get a Faculty Position” – the first on getting the interview and the second on succeedingduring the interview. In both cases, I noted that I would write three posts on the topic, with the last one being something like “Guaranteeing Success.” Sounds like an appropriate New Year’s resolution to me.

We can start from the premise that you have just failed in one – or several – or many – attempts to get interviews or to get job offers after the interview. This is an easy starting premise as nearly everyone will experience that state. In my first year on the market, I applied for 7 jobs and had 1 interview and no offers. In my second year on the market, I applied for 7 jobs again and had 1 interview again and no offers again. At this point, I might well have quit and gone on to something different, as many people apparently do. In my third year, I applied for 46 jobs, had 19 requests to interview, went for 9 interviews, and had 3 offers. I accepted the third offer – McGill University – and cancelled the other 10 interviews. 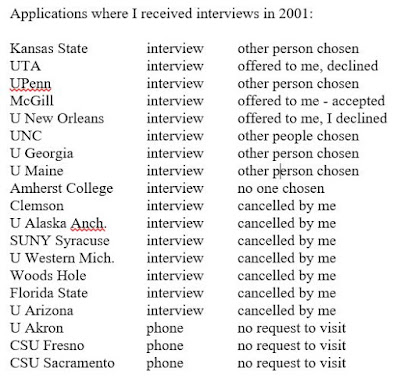 Clearly I had a big shift in approach from my first two years to my third. This shift – and my experiences since – have led me to the big conclusion that you won’t hear from most others:

Anyone with a decent record can get a faculty position!

Don’t believe me? Well, perhaps it is because I need to add two major qualifiers to this assertion. If you adopt these qualifiers, which I will now outline, you will get a job.

Everyone has preferences for where they want to work – an Ivy League school (Harvard!) or a particular country (Switzerland!) or geographical region (New England!) or city (Montreal!) – but restricting yourself like means that your chances go way down. In reality, you should not restrict yourself in this manner because, thinking globally, there are hundreds to thousands of relevant (to you) faculty jobs around the world each year. Importantly, many of those positions are in less desirable places or at less prestigious institutions, which means that competition for them will be lower and your chances correspondingly higher – particularly if you apply for a lot of them.

Now, I know what you are thinking – “Yuk, I don’t want a job at the University of Southwestern Northern Nunavut.” Neither do I, but here is the important thing to remember: You are not marrying your institution – you are dating it. If you don’t like it, you can leave – at any time and for any reason. The key is to get yourself into a job where you can prove your abilities as an independent researcher, get your start-up money, get a grant, do some teaching, and so on. That can happen at nearly any university in nearly any state or country. After proving your abilities as a faculty member you can – if you want – start applying strategically again. This sequence is extremely common – many faculty members start at seemingly less desirable places and then move in five or so years to somewhere they really want to be. On the flip side, many people find that they actually do like the university or place where they start and end up having long, exciting, productive careers at places they never would have targeted at the outset. Moreover, I have found that nearly everywhere in the world has interesting aspects to commend it – nature, art, music, architecture, scenery, night life, peace and quiet, whatever – why not experience them for a while or forever. Of course, a key point here is to make sure that you get a first position that will enable you – should you desire – to later move up your own personal preferred food chain. For instance, if you ultimately want a research position, then you had better get your first faculty position at a research institution.

We are continually bombarded with stats on how many people give up on their dreams of being a professor because they can’t find a job or for other reasons, such as a particular life style that is, whether real or imagined, incompatible with academia. These people are typically those that don’t follow the point above. (Note that I am not being judgmental here.) Thus, the people who aren’t picky and don’t give up are the ones that will ultimately succeed. Yes, it might take years. Yes, you might be underpaid during that period. Yes, you might have to move a lot. But, also, yes, you will eventually get a job. Thus, if you goal really is a faculty position – and that is your primary goal – then you will get one if you are not picky and you don’t give up. If you don’t want to wait it out, if you want a better paid position, if you want to live in a particular place, if whatever … great, go for it. But if a faculty position is what matters most, then don’t be picky and don’t give up.

However, note that you do have to have a decent record. That is, if you are interested in a research position, you do have to be publishing research papers – not tons, but some, and you need to do so recently – you can’t have long gaps in your publication record (see the earlier posts). If you are interested in a teaching position, then you need to be gaining good teaching experience. And so on.

If you really want an academic position (or any position for that matter), make it your New Year’s resolution to get one by not being picky and not giving up. Of course, you might not achieve our resolution for several New Years to come – but you will eventually.

My earlier "How To" posts are here