The focus of most eco-evolutionary dynamics work in macro-organisms has been to describe the community and ecosystem effects of different trait variants (e.g., genotypes, phenotypes, or ecotypes) within a species. Two categorical trait variants common to most animal species are males and females. There exists a centuries-old tradition of describing dimorphism between the sexes, though little has been done to characterize sexual dimorphism in ecological effects. Take a look at even moderately dimorphic species, and, in many cases, it is difficult to imagine a scenario where males and females are completely equivalent in their resource utilization. This “extended sexual dimorphism” may become particularly relevant to our understanding of ecology when populations vary in the relative abundance of males and females – i.e., when there exists sex-ratio variation among populations – which is a surprisingly common phenomenon. 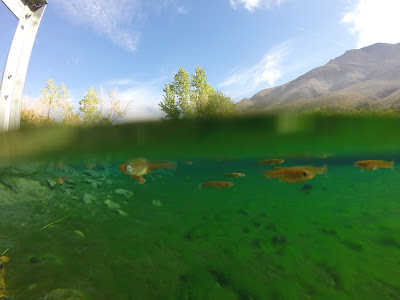 Invasive mosquitofish in a geothermal spring-fed pond in eastern California. For my dissertation, I am primarily studying how contemporary thermal adaptation in this species modifies its ecological effects. (D. Fryxell)


So, sexes might commonly differ in their ecological effects, and sex ratios can vary across space. In a new paper we sought to test the hypothesis that natural sex-ratio variation has community and ecosystem effects using mosquitofish (Gambusia affinis) – a small, livebearing fish, which currently inhabits freshwaters across the globe. Very intriguingly, this species shows sex-ratio variation across space and time from greater than 90% males to greater than 90% females. Importantly, males and females of this species are also known to differ in their ecological effects. Many differences are likely related to the relatively large size and continuous growth of females, compared with the small size and asymptotic growth of males. However, they are also a sexually coercive species, and females are known to spend relatively more time foraging when in female-biased versus male-biased groups. Observe groups of mosquitofish for just a few moments and you will readily observe how seemingly bothersome males can be to the goings-on of females. 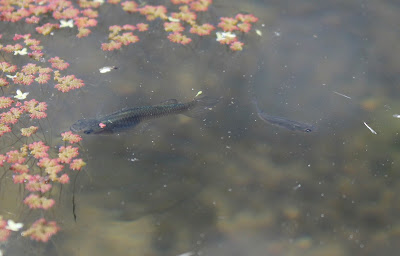 Female mosquitofish (left) and male mosquitofish (right) in an experimental pond. Unless group sex ratios are strongly female-biased, it is rare to see a female without a male trailing close behind her. (D. Fryxell)


Because female mosquitofish have higher feeding rates, prefer larger food items, and forage more in the presence of other females, we predicted female-biased populations would induce stronger trophic cascades than male-biased populations. We used experimental ponds to test this prediction, and found our predictions supported, albeit with some interesting ecological details. You can read the specifics of our methodology and our interpretation of the experimental results in the paper (link below). 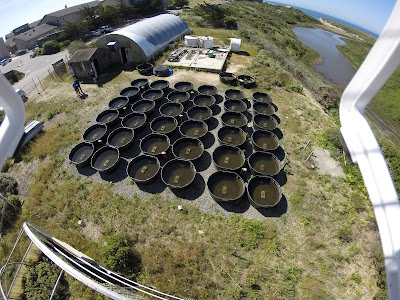 The mesocosm array at Long Marine Lab of the University of California at Santa Cruz. (D. Fryxell)


This was, to our knowledge, the first study investigating the community and ecosystem consequences of sex ratios. It was partly a proof-of-concept experiment, and we are looking forward to future investigations into other study systems. In particular, it would be interesting to combine experiments with observations of how ecological patterns in nature vary with the sex ratios of ecologically-important focal species. Our hope is that this experiment leads the way towards incorporating sexual dimorphism and sex-ratio variation into future considerations of ecological and eco-evolutionary dynamics in nature. I have also now personally learned the importance of controlling for sex ratio in experiments testing for ecological divergence among mosquitofish populations.