Tinkering with the Axial Skeleton: Insights from an Evolutionary “Supermodel”

Tinkering with the Axial Skeleton: Insights from an Evolutionary “Supermodel”

Fishes are extremely diverse and exceed all other living vertebrate groups combined in terms of species numbers. With this great taxonomic diversity comes a great diversity of forms. From seahorses and hatchet fishes to eels and the common mola, from tiny gobies and miniature tetras to giant groupers and the great pirarucu, fishes come in all shapes and sizes (Fig. 1).

A major theme in the variability of fish form is the evolution of elongation. Extreme elongation has evolved repeatedly in different groups of fishes (and other vertebrates, for that matter), and is strongly associated with changes in the axial skeleton (Fig. 2), especially increases in the number of vertebrae (e.g., Ward & Brainerd, 2007; Ward & Mehta, 2010). Advances in evo-devo are facilitating the study of the molecular mechanisms responsible for changes in body form and axial patterning. For example, there has been great progress on deciphering the molecular mechanisms through which the number of body segments is regulated and the identity of body segments is established in vertebrates (Gomez et al., 2008; Gomez & Pourquié, 2009; Mallo et al., 2010). Moreover, several recent studies present candidate genes for the evolution of vertebral number in fishes (e.g., Ward & Mehta, 2010; Kimura et al., 2012; Berner et al., 2014). Although much remains to be learned, progress is definitely being made.

Fig. 2. Radiographs showing examples of variation in body form and vertebral number in fishes (courtesy of the Smithsonian Institution).

But what about the early stages of the evolution of body elongation? What are the selective pressures at play early on that guide fish with typical body forms to evolve body elongation? How do the structural changes originate, how are developmental pathways modified, and what are the functional consequences along the way? That old friend of evolutionary biologists, the threespine stickleback (Gasterosteus aculeatus), may provide some insights.

I have been studying the threespine stickleback since the early 2000’s, when my former Ph.D. advisor, Mike Bell, formally introduced me to them. Although there are many aspects of their morphology that have attracted the interest of scientists, body shape has been a standout. Body shape variation is substantial within this species and correlates strongly with ecology. Oceanic ancestral populations differ greatly from the resident freshwater populations that they have established throughout the world. Resident freshwater populations also differ substantially from one another. Along one axis of diversification in freshwater environments, resident populations in streams and shallow lakes (benthics) evolve relatively deep bodies, whereas resident populations in deep lakes (limnetics) evolve more elongated, streamlined bodies.  This shape variation has been characterized repeatedly in different geographic areas and is relatively well understood (e.g., Walker, 1997; Spoljaric & Reimchen, 2007; Aguirre, 2009). Is this variation in body form at the microevolutionary level associated with changes in the axial skeleton as seen across broad taxonomic ranks in fishes? Does vertebral number increase in more elongate limnetics?

Since this is the threespine stickleback we are talking about, an evolutionary “supermodel” (Gibson, 2005), there is of course some previous research on the subject that suggests that body form indeed covaries with variation in the axial skeleton in the predicted direction (e.g., Reimchen and Nelson, 1987; Ahn, 1988). To explore the evolution of body form and vertebral architecture in stickleback in greater detail, my students and I set up a study to address four basic questions:
The project started with a survey of nine populations of threespine stickleback sampled from Alaska: three limnetic populations, three benthic populations, and three anadromous populations. The initial results were published in 2014 (Aguirre et al., 2014b). We have since expanded to 20 populations by adding samples of four more limnetic populations and seven stream populations. The expanded data is currently being prepared for publication in combination with results of common garden experiments to examine the heritability of vertebral number in these stickleback populations.

Body shape data were collected using geometric morphometric methods, which allow for very precise measurement and visualization of shape differences among specimens. We then took the same specimens to the Field Museum of Natural History (Chicago), where they were X-rayed to obtain vertebral number data (Fig. 3).  Details of the methods of analysis are available in Aguirre et al. (2014b).

Was there sexual dimorphism in vertebral number? We only have data on nine of the populations for this, but the result was consistent enough to draw a conclusion without the need to survey all 20 populations. Surprisingly, we did not detect a significant difference in total vertebral number between sexes as Reimchen and Nelson (1987) did. Geographic variation or differences in statistical power between studies may account for the difference. However, we did see a consistent and statistically significant difference in the proportion of abdominal to caudal vertebrae between the sexes, with females having more abdominal vertebrae and males having more caudal vertebrae (Fig. 4). The difference was not very large but the trend was the same in every population for which data were collected.  This is consistent with a transformation of vertebral identities resulting in an expansion in the abdominal region in females, perhaps to increase the volume available for packing eggs. Stickleback are small fish and the abdomen of gravid females can exhibit fairly extreme distension, suggesting that an expansion of the abdominal region in females might increase fitness by allowing them to pack a greater number of eggs in the abdomen.  This was previously suggested by Lindsey (1962, 1975) and similar patterns have been reported for other types of fish (Hart & McHugh, 1944; Hastings, 1991), although it is not clear whether this is widespread in fishes. 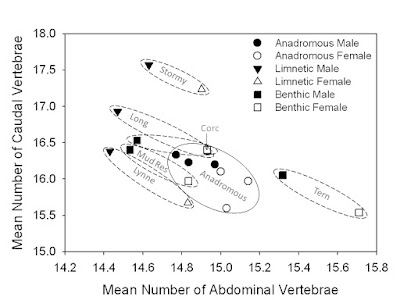 Is there a significant difference in vertebral number among anadromous (oceanic), benthic/stream, and limnetic populations of threespine stickleback? Yes. Using samples of males from all 20 populations surveyed, limnetics have significantly more vertebrae than populations of the other ecomorphs (Fig. 5A). The difference is only 0.5-0.6 more vertebrae on average – not very large, but statistically significant and fairly consistent with the exception of one limnetic population, Lynne Lake, which was an outlier for every variable measured. Whether vertebrae are changing in length as well is something that we are currently examining. There was also fairly obvious body region specificity in terms of where vertebral number changed. It was the number of caudal vertebrae that increased in limnetics and accounted for the greater number of vertebrae overall. This is consistent with the previously documented expansion of the caudal region of the body in limnetics, suggesting covariation between body form and vertebral number as observed at broader taxonomic ranks. 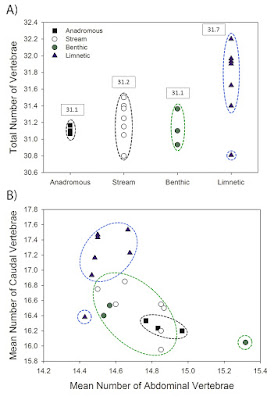 Finally, is there an association between vertebral number and body shape within ecomorphs? Again, the answer is yes. We conducted a discriminant function analysis (DFA) on the body shape data to classify individuals as being relatively benthic-/stream-shaped (treating benthic lake and stream populations as one ecomorph because of their morphological and ecological similarity) or relatively limnetic-shaped, and then calculated the mean DF score along this shape-type axis for each population. Populations with more extreme mean scores along the axis had more pronounced benthic/stream (positive side) or limnetic (negative side) body shapes. Mean population DF score based on the body shape data was strongly correlated with total vertebral number within both ecomorphs (r = -0.888 and -0.811 for benthic/stream populations and limnetic populations, respectively), indicating that body shape was correlated with variation in vertebral number in the same way within both ecomorphs (Fig. 6). 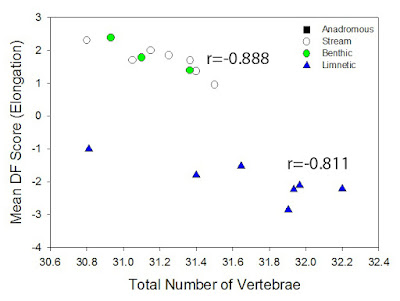 Fig. 6. Association between total vertebral number and body shape within ecomorphs. Anadromous samples not included, and benthic and stream samples pooled as one ecomorph.

Where do we go from here?

A major goal of future research will be to try to decipher whether variation in vertebral number matters functionally at this scale. Vertebral number and body shape covary in stickleback, so it is possible that differences in vertebral number per se do not matter functionally; perhaps the trait being selected for is the change in body shape, with selection for more elongate bodies and an expanded caudal region in limnetics resulting in a correlated increase in the number of caudal vertebrae. However, maybe the number of vertebrae itself does matter. Inasmuch as increasing the number of vertebrae, for fish with similar body shapes, may result in an increase in flexibility, changes in vertebral number may impact burst-swimming performance since rapidly bending the body is an important part of the escape response of fishes. This was suggested previously by Brainerd and Patek (1998), although much more work on this issue is needed, including in the threespine stickleback. 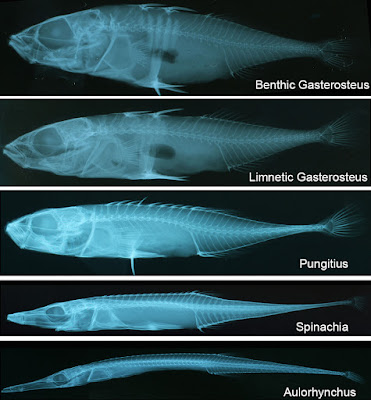