Since Darwin, we have come a long way in refining our knowledge of selection as a driver of evolutionary change. To give just a few examples, we now know that selection exists as different ‘types’ (e.g. divergent, disruptive, or negative frequency-dependent), and can change in its form and strength through space and time. It is also becoming apparent that selection is constantly acting on the genome and therefore influences patterns of molecular variation. These examples help illustrate how our understanding of selection has developed over the last 150 years. However, there is still a great deal to learn.

Recently, access to genetic data has become easier due to new sequencing technologies and methods of genome manipulation. As such, determining the genetic basis of traits is now more feasible, for a wider range of organisms, than ever before. This is a significant advance for evolutionary biologists because knowledge of the genetic basis of traits allow us to forge explicit links between evolutionary processes such as natural selection and the evolutionary response to selection (Gratten et al. 2008; Johnston et al. 2013). An important goal in modern evolutionary biology is therefore to quantify how phenotype, genotype, and fitness interact to influence evolutionary trajectories (i.e. to quantify ‘phenotype-genotype-fitness [PGF] maps’) (Barrett and Hoekstra 2011; Bierne et al. 2011). The Californian stick insect Timema cristinae provides an opportunity to quantify a PGF map because their evolutionary ecology is fairly well known and genomic resources for them are emerging.

These flightless insects can be found on two common plants in the chaparral of coastal California near Santa Barbara: Ceanothus spinosus and Adenostoma fasciculatum. In populations found on C. spinosus the majority of individuals have solid green colouration, but when found on A. fasciculatum, individuals are usually green with a conspicuous white stripe down their back (see image for examples). This dorsal ‘stripe’ is under strong divergent selection between host plants (Nosil and Crespi 2006). Despite the evidence for strong divergent selection acting on the green and green-striped phenotypes, maladaptive (i.e. mismatched with respect to host plant) phenotypes can be found at varying frequencies within any given population (i.e., green individuals on A. fasciculatum and green-striped individuals on C. spinosus). In part, this maladaptive variation is maintained by ongoing gene flow between populations (Sandoval 1994b; Nosil 2009; also see this EcoEvoEvoEco post by Tim Farkas regarding the ecological effects of maladaptive gene flow in T. cristinae). This begs the question: in T. cristinae, what processes maintain gene flow among populations, and maladaptive phenotypic variation within populations, despite strong divergent selection acting on color pattern? Enter the “dark morph” of the T. cristinae system…


In addition to the green phenotypes mentioned above, a “dark morph” that has previously been referred to as “red” or “grey” (Sandoval 1994a) is found at modest frequencies (~10 %) in most populations of T. cristinae. We here refer to this phenotype as “melanistic” (see image above). At that moment during everyone’s PhD studies when they say to themselves, “what the heck is my thesis going to be about?”, Patrik and I discussed focusing on understanding the evolutionary forces working to maintain this enigmatic melanistic phenotype of T. cristinae. At that time we knew little about the ecological / selective factors maintaining the melanistic phenotype; fleshing that out, particularly when added to our growing knowledge of the genetic basis of the colour and colour-pattern phenotypes, could lead to a better understanding of ecological speciation in the T. cristinae system. In a recent paper (Comeault et al. 2015) we present the work that emerged from this. The paper shows how selection acting within populations of T. cristinae can maintain the melanistic phenotype; it also suggests that the melanistic phenotype maintains gene flow among populations, thus acting as a ‘genetic bridge’ that constrains adaptive differentiation and speciation. Below we summarize the diverse data we collected. 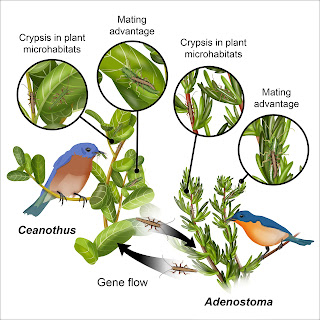 A graphical abstract of Comeault et al. 2015 (click to see at larger size)


We first used ecological measurements to provide evidence that melanistic T. cristinae are maintained by factors including resistance to fungal infections, a mating advantage, and increased crypsis on the stems of both host species. We also found evidence that melanistic T. cristinae may disperse between host plants more than green T. cristinae. These results indicated to us that selection acting on the melanistic phenotype is different than that acting on the green and green-striped phenotypes: a multifarious balance of selective agents maintains the melanistic phenotype within both host plant species, whereas green and green-striped individuals are under divergent selection between the two hosts. We now had an idea of the ‘phenotype’ and ‘fitness’ components of the PGF map for colour and colour-patterning in T. cristinae. We next set off to quantify the genetic basis of these traits. This can be an important step in understanding the evolutionary consequences of phenotypic variation because the response to selection is influenced by aspects of the genetic architecture of traits, such as dominance relationships among alleles, epistasis, and the number of loci underlying phenotypic variation.

Using a combination of classical genetic crosses and multilocus genome-wide association mapping, we identified aspects of the genetic architecture of colour patterning and colour in T. cristinae. Results from these analyses revealed the following: (1) different loci control pattern versus color, (2) both traits are under ‘simple’ genetic control with a single locus for each trait controlling the vast majority of phenotypic variation, (3) green colour alleles are dominant to melanistic alleles, and within green individuals the green allele is dominant to the green-striped allele, and (4) both traits map to the same linkage group (i.e., the loci controlling pattern and color are physically linked).

With all three components of the PGF map now in hand, we developed the hypothesis that melanistic T. cristinae act as a ‘genetic bridge’ among populations. Our logic was as follows: if melanistic individuals are not under divergent selection between host plants, they may be free to move between plants and thus facilitate gene flow between them. In addition to simply moving between environments, they would be capable of shuttling locally maladaptive alleles between host plants – because, crucially, green patterning alleles (striped or unstriped) are not expressed in melanistic individuals. To test this hypothesis, our modeling wizard Sam Flaxman helped us develop a tailor-fit individual-based simulation program.

Simulations enabled us to test the relative importance of individual aspects of the melanistic phenotype (such as a mating advantage for melanistic individuals) in facilitating gene flow between host plants. Indeed, the simulations found that the presence of melanistic T. cristinae reduced adaptive differentiation between populations on different hosts and increased rates of inter-host mating (see figure below). These results show how the melanistic phenotype acts as an ‘anti-speciation’ phenotype, mitigating the effects of divergent selection acting on the stripe phenotype. Moreover, we found that these results were robust to removing individual factors attributed to the melanistic phenotype, such as their mating advantage or their propensity to disperse. The one factor that, when removed from the model, did reduce the ‘anti-speciation’ effect of melanistic individuals was the genetic architecture of the colour and pattern traits: when we removed dominance relationships among alleles at the colour and colour-pattern loci, we found that melanistic individuals did not promote maladaptive gene flow or increase levels of inter-host mating. These simulations therefore used the PGF map to empirically quantify an example of an ‘anti-speciation’ phenotype. Our results also highlight how a combined understanding of both the evolutionary ecology and the genetic architecture of phenotypic variation can help us better understand the evolutionary process. We hope that future work in other taxa will continue to illuminate how phenotypes, their underlying genetic architecture, and fitness relationships interact – not only to drive adaptive evolution, but also to constrain it. 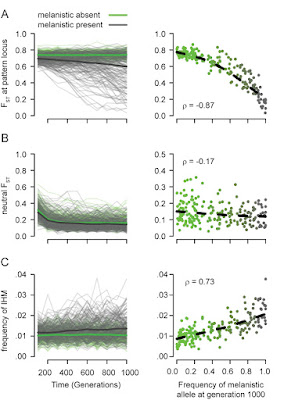 Evolutionary effects of the melanistic phenotype. The presence of melanistic individuals within simulated populations reduced adaptive differentiation (Fst) at the locus controlling pattern phenotypes (A), had a slight effect on levels of neutral genomic differentiation (B), and increased levels of inter-host mating (IHM) (C).  (Click to see at larger size).