Lessons from The Stickleback

Lessons from The Stickleback: an undergraduate’s first quest into research and publication in evolutionary ecology

I found myself enrolled in an honours biology class at the University of British Columbia in my third year. Everyone else in the class had already found a lab to work in. I, on the other hand, hadn’t a clue about research, other than the fact that I had to start some soon. I had very little idea about how I was to find a lab to work in, let alone a project*. Thus I began my quest for potential advisors. I liked “ecology.” I liked “evolution.” So I searched those (painfully general) terms through the UBC Zoology faculty websites. Eventually I found myself at the door of Dolph Schluter's office. Dolph literally wrote the book on adaptation and ecology. But I was a lowly undergrad, and I (thankfully) knew nothing about fame in academia.

Dolph described a project that examined the conventional ecology–evolution relationship from an entirely new perspective. Well, the opposite perspective anyway. I knew that evolution could occur via species adapting to their ecological surroundings – that is, how ecology affects evolution. The proposed project, however, looked at the ecology–evolution relationship from the other direction – how do specialization and diversification that result from evolution then feed back onto the species’ ecological surroundings? To examine these questions, the project would employ Dolph’s primary study system, the threespine stickleback. 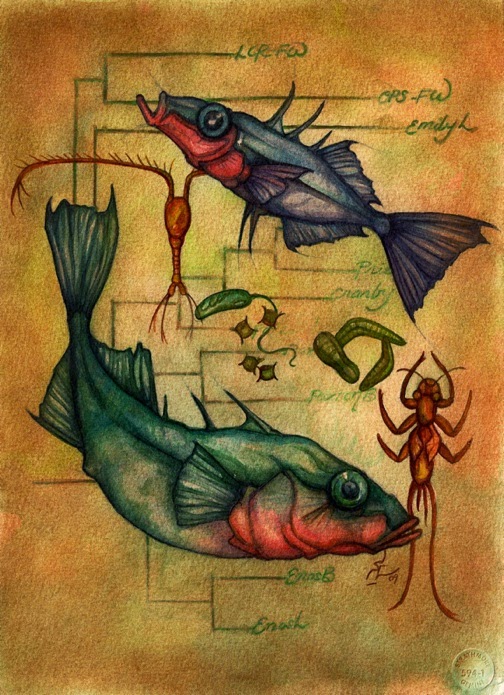 My illustration of limnetic and benthic stickleback, which did not make it onto the cover of any journal.

I knew about character displacement and the ecological niche, and I daresay I even know about these concepts in threespine stickleback. Namely, several freshwater lakes in coastal British Columbia contain two “ecotypes” – not quite species by most definitions, but populations with specialized feeding morphology and behaviours suited to specific ecological niches. The “limnetic” stickleback, with several small gill-rakers, a narrow gape, and slender body, feeds on tiny zooplankton in open water. The “benthic” stickleback, with fewer large gill rakers, a larger gape, and deep body, consumes larger macrinvertebrates from the lake bottom (Schluter 1994). Legend (read, plentiful research) has it that the two ecotypes most likely experienced ecological divergence through two colonization events (from the ocean via repeated sea level rises) followed by character displacement: the first colonist evolved into the benthic ecotype, and the second became displaced to the limnetic niche (Schluter and McPhail 1992). Although the limnetic-benthic stickleback divergence has occurred in parallel in several freshwater lakes, most lakes contain one, solitary, generalist type, which has intermediate morphology between the two ecotypes. In some cases, such as on Texada Island, “species pair” and “solitary” population lakes are within a mile (1.6 kilometers) of each other. 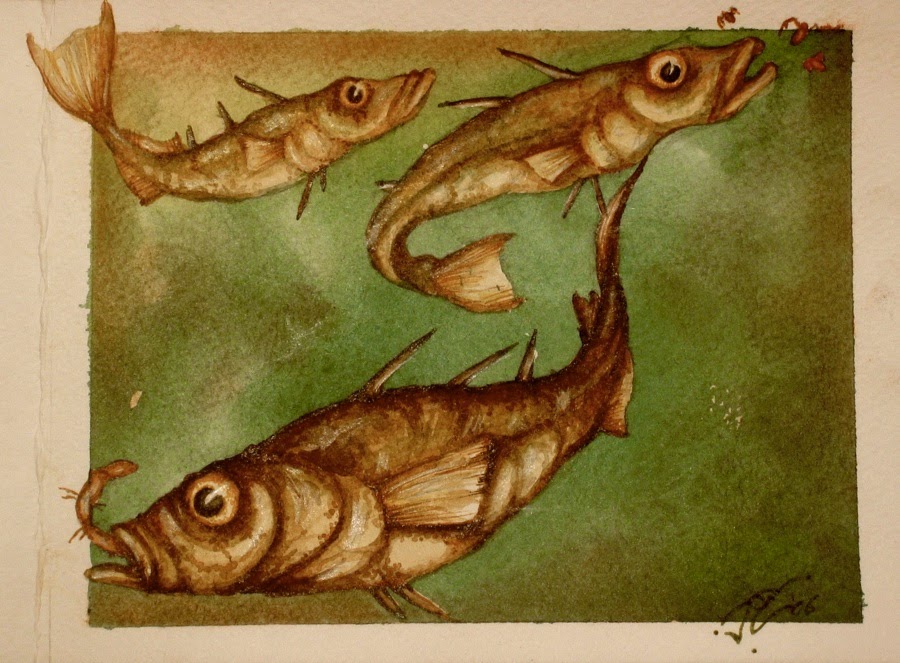 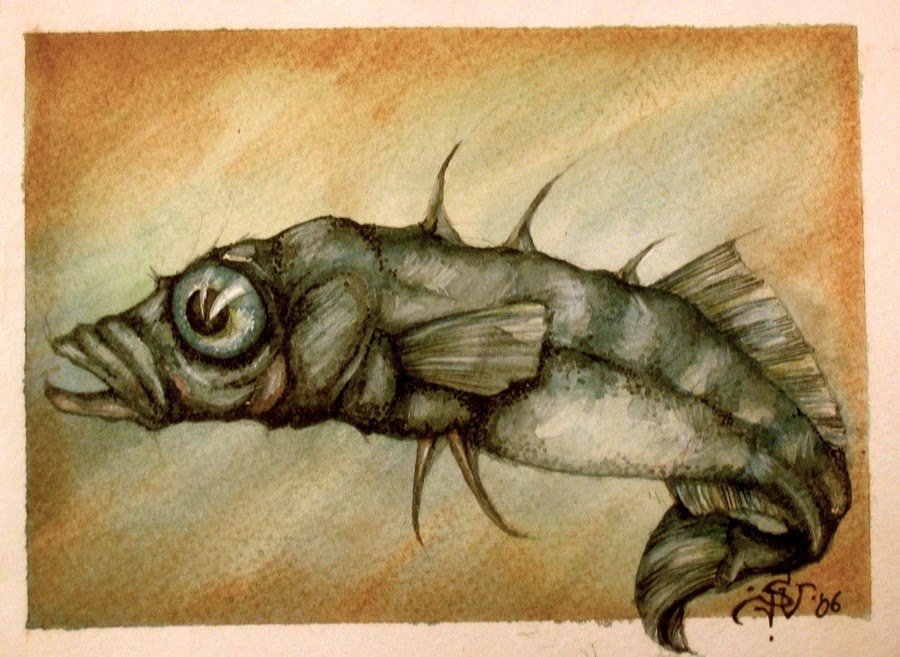 If you are ever my advisor, you will undoubtedly receive artwork: illustrations for Luke Harmon and Dolph Schluter, respectively, of a “species pair” stickleback community (top) and an unfortunate looking solitary generalist (bottom).

The experimental set-up and my role in the project were straightforward. I was introduced to Luke Harmon (who later became one of my PhD advisors) and Jon Shurin (who co-advised my honours thesis). Together we created miniature... well, medium-sized ecosystems (mesocosms) of six different treatments: no fish, generalist fish only, limnetic fish only, benthic fish only, limnetic and benthic fish together, and finally a double-density treatment of both limnetic and benthic fish. My main job was to sample and measure different ecological response variables indicative of the abundance of organisms at different levels in the food chain (periphyton, phytoplankton, and zooplankton) and primary productivity (dissolved oxygen). Collecting fish on Texada Island, staying up late and waking up early to measure dissolved oxygen in each of the forty tanks, consumed by counting zooplankton species under a dissecting microscope, and – most dreaded – filtering chlorophyll from periphyton and phytoplankton samples. Such was my first summer of research. I was finally a real scientist, studying something that had basically never been studied before.

I learned that science, especially when it’s outside, is messy. We had a number of fish deaths, and every time I found a little stickleback floating belly-up, I had to rush back to the aquariums on campus and find an individual matching it as closely in size and weight as possible. One tank killed all its fish and had to be abandoned entirely. One tank hatched long-toed salamanders (which I dutifully helped disperse elsewhere). Several tanks became nurseries to baby stickleback (after our last sampling date, thank Gaia). And the tanks became more and more difficult to maneuver among during sampling – we had cleared an area of bushes and narrow trees to set up the tanks, but come the springtime in Vancouver, the blackberries were making a ferocious comeback. 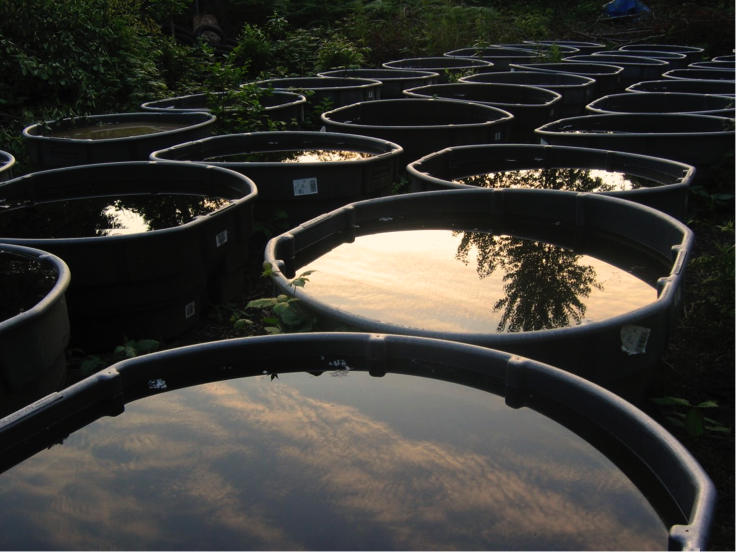 Mesocosms in the early early morning... slowly being overtaken by blackberry bushes


Alas, results emerged. Both stickleback evolution (diversification and specialization) and ecology (density) affected ecological variables in some way. When compared to the generalist treatment, the limnetic treatment, the benthic treatment, and the limnetic–benthic treatment differed in zooplankton community composition (that is, the type and abundance of different zooplankton). Productivity – both as indicated by dissolved oxygen and chlorophyll from periphyton and phytoplankton – differed significantly between density treatments, as did abundance of small zooplankton (rotifers). Specifically, productivity and abundance of small zooplankton increased with the presence of, and with increasing density of, stickleback (an expected result, considering the predictions of the trophic cascade hypothesis). 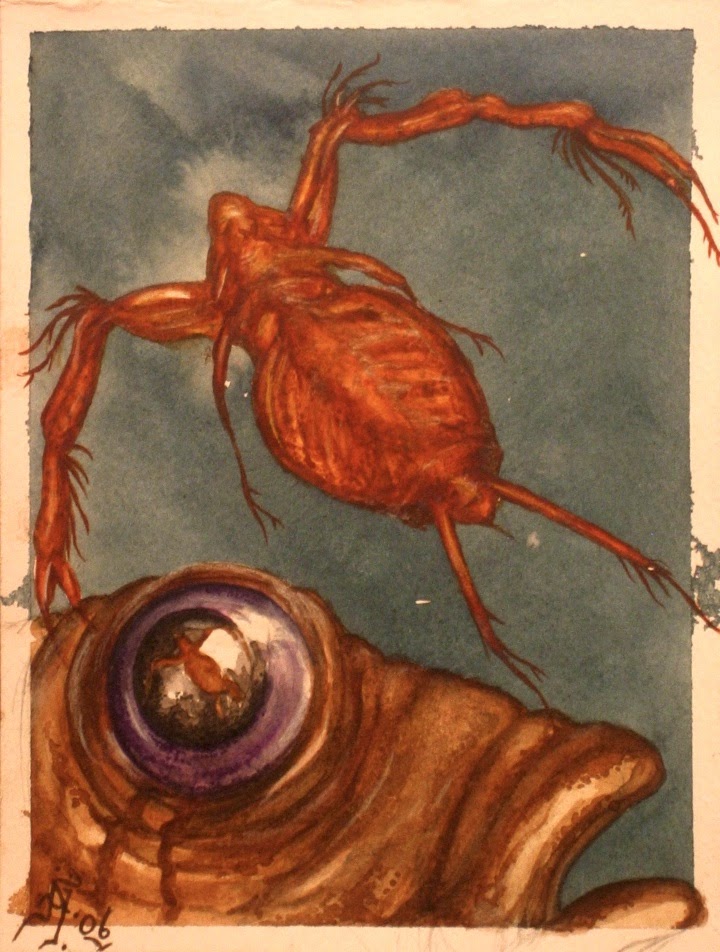 Interesting results, we all thought. Let’s do it again, said Dolph. Let’s narrow it down and more specifically ask about those evolutionary effects. Let’s change the experimental set-up and abandon the no-fish and double-density treatments, use only female fish so no one breeds, move the whole experiment to a new, less cluttered site. Let’s take on another collaborator (Blake Matthews) who could help us measure other ecological variables like dissolved nutrients, the light environment, and benthic macroinvertebrates. And finally, let’s measure how these ecological variables change over time. 
The results, which I will not discuss here, were published in Nature (Harmon et al. 2009), and saw a lot of publicity. I was, and still am, infinitely grateful to have been included on this project and publication. At the time of the Nature paper, I was starting my PhD on another system. Unfortunately, I was facing delays with publishing the results of the first project (which was a considerable challenge after the Nature paper’s release). Turns out the final lesson the stickleback had for me was how to distinguish my paper (on a project that we performed first) from a substantially more prominent publication (on a project that we performed second). Reading the publications now, in light of the above, I hope you will see how different the projects really were. In 2013 I published the first project in the very popular open access journal PLOS One.

In hindsight, it is clear to me how fitting it is that the two projects were published in such different ways. The avenues of publication, I think, were not necessarily reflective of the importance of the results, but rather, were a consequence of publication order and different approaches to disseminating the work. The Nature paper was not open-access, but has become widely read. The PLOS One paper is open access, but is (I must admit) probably relatively hidden among the thousands of papers published in that journal every year. However, I can say now that publishing in PLOS One allowed me to preserve the integrity and, okay, the soul of my undergraduate research. I got to keep all my Figures. My Methods are in a full-size font right after the Introduction, where, after so much of my blood (recall, blackberries), sweat, and tears, they deserve to be. This paper is no shadow of Harmon et al. 2009. If anything, by looking at both ecological and evolutionary effects of stickleback, it provides a solid context for studies like Harmon et al. (2009), which examine only the latter.

I can’t think of a better way to be introduced to the fields of ecology and evolution than with projects that look at their dynamic relationship from a new point of view. In my mind, there is no question that ecological and evolutionary processes feed back on one another. The strength of these interactions, I imagine, depends largely on the system examined, and I look forward to reading about new projects in which the mechanisms behind the eco–evo relationship are explored.

* Every time I tell my ~30 first-year students to get involved in research as early as possible, I feel a twinge of irony as I think back to my immense reluctance to do so myself.