Do you pee more, or less, when you’re scared?

When I talk to people outside of ecology and evolutionary biology, I usually joke that my job as a graduate student is to “study fish pee”. This is intentionally self-deprecating, but it also sets up my next point: that fish pee is important and interesting. Fish pee (more formally: excretion, the release of dissolved chemicals as byproducts and excesses of metabolism) is important because it contains fertilizers (ammonium and phosphate) that can alter ecosystem function. Fish excretion is also interesting because it reflects animal physiology and can be used to assess how animal metabolism responds to varying environmental conditions. If I explain myself well, I may manage to convince my poor conversation partner that fish pee is worth studying.

While the importance of fish excretion to ecosystem function has been described by several authors (Zimmer et al. 2006; Small et al. 2011; Layman et al. 2013), much uncertainty remains as to why there is so much variation in the rates at which fish excrete. Lab studies have demonstrated that fish body temperature, body size, and food availability all cause some variation in excretion, but these factors explain just a fraction of the variation observed in empirical field studies. This unexplained variation may result from the stochastic noise caused by the stress of the experimental apparatus and difficulty of measuring nutrients, but it may also reflect variation that is induced by “cryptic determinism” due to knowable variables that have been unaccounted for in previous analyses.

Differentiating between measurement error and cryptic determinism is more than an academic exercise. If variation in excretion is due to noisy measurement methodologies, researchers will continue to struggle to predict excretion rates. In contrast, if environmental variables that we have not accounted for are causing this variation, then finding and measuring those variables will improve predictions of how much fertilizer fish will release as excretion. Describing and understanding environmental influences on excretion rates, moreover, would shed light on how evolution and phenotypic plasticity shape metabolic traits to enable survival in changing environments.

My advisor, Alex Flecker, and I undertook lab research in 2012 to assess one largely undescribed but potentially important driver of variation in fish excretion – predation risk. Our study sought to (1) understand how predation risk affects excretion by fish, and (2) explore whether these effects might reveal general adaptive responses of prey to the risk of being eaten.

Dror Hawlena and Os Schmitz, researchers at Yale University, motivated our work by finding that predation risk drove substantial variation in nutrient processing by a keystone invertebrate herbivore. In the old fields of Connecticut, Hawlena and Schmitz observed that the mere presence of a predatory spider increased the nitrogen (N) waste from grasshoppers. Increased grasshopper losses of N through excretion lowered the N content of their carcasses (Hawlena and Schmitz 2010a), which slowed soil respiration and decomposition in fields where predatory spiders lurked (Hawlena et al. 2012). Thus, by merely imposing risk on grasshoppers, spiders could elevate the N metabolism of their prey and alter ecosystem function. This interesting result raised the question of whether this response was general to all predators and prey, or something specific to this one empirical system.

Dror Hawlena and Os Schmitz combined their results with studies on laboratory model systems to suggest the answer is very general (Hawlena and Schmitz 2010b). Indeed, studies on laboratory animal models have repeatedly shown that exposure to predation risk increases expression of glucocorticoid steroids by prey. Elevated glucocorticoid expression results in more amino acid catabolism, which increases ammonia excretion and depletes tissue N reserves. Because the glucocorticoid response is thought to be conserved among all animals, it is possible that all animal prey excrete more nitrogen when predators lurk. Predators, then, may unlock nitrogen from their prey, driving variation in N excretion that researchers would have previously considered experimental noise.

We sought to explore this issue using another model for predator-prey interactions in nature, the Trinidadian guppy. Our study was designed to (1) explore the potential for a predator, the pike cichlid (Crenicichla sp.), to induce comparable metabolic plasticity in Trinidadian guppies, and (2) determine whether such predator-induced plasticity may be an adaptation that enhances guppy survival and reproduction in risky environments. 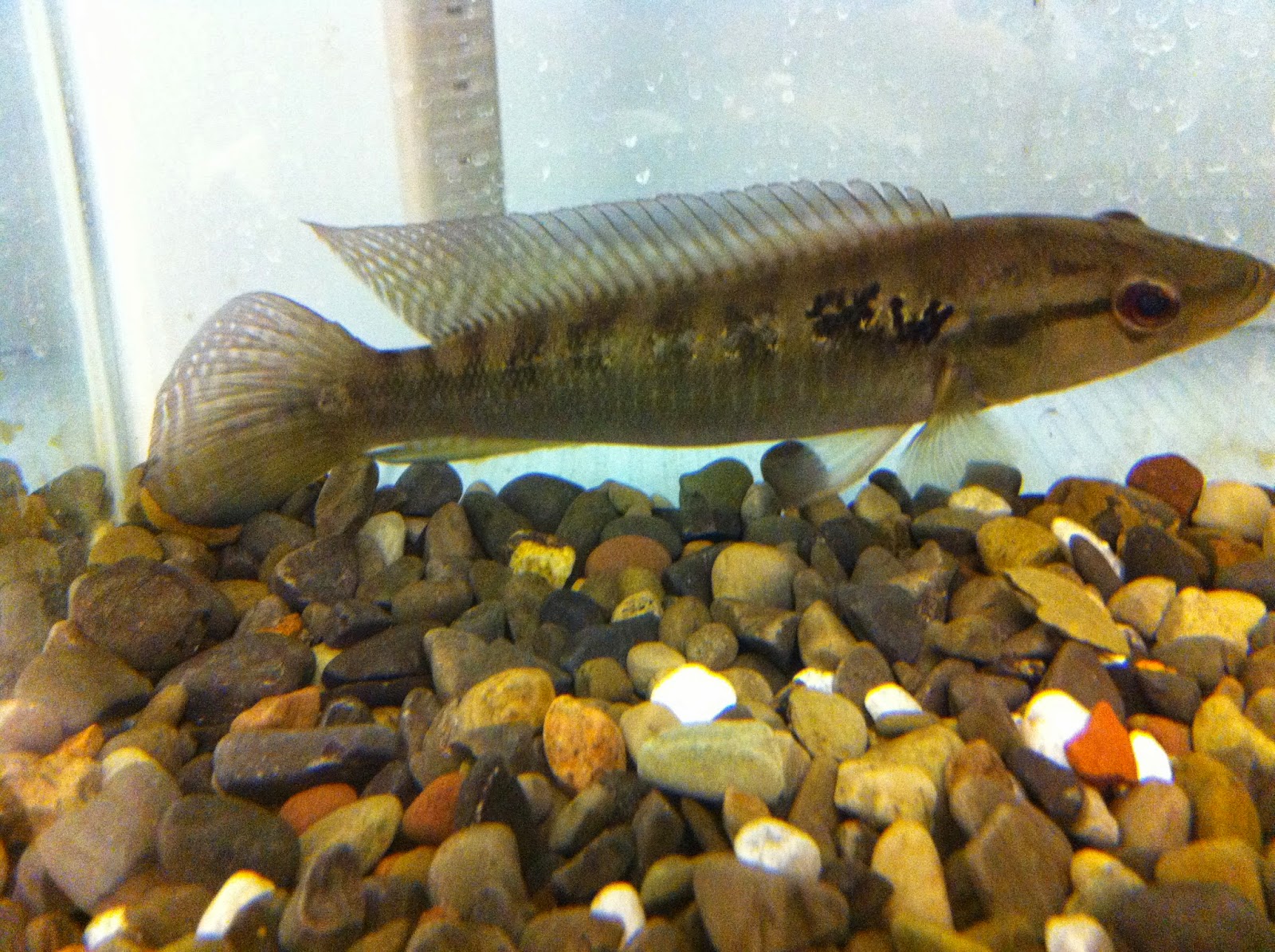 Our predatory fish, Crenicichla spp. This specimen was not used in this experiment, and was sent to us by an aquarium store in Portland, OR (“The Wet Spot”). It was sold to us as a “wild Crenicichla sveni”, from the Rio Orinoco in Colombia. Interestingly, its chemicals elicited the same response from guppies as did the chemicals emitted by Crenicichla sp. captured in Trinidad.

Our study was based on a design pioneered by Cameron Ghalambor, Corey Handelsman, and Emily Ruell (among others) at Colorado State University. Corey, Emily and Cameron modified complex zebrafish-rearing systems to breed and rear individual guppies from Trinidadian guppy populations. For experimentation, they varied the source of water flowing into each guppy tank, with some tanks receiving flow from a source with a single pike cichlid, and other tanks receiving flow from a source with no fish in it. Researchers in the Ghalambor lab found that the chemicals excreted by the pike cichlid consistently induced behavioral, metabolic, and life history responses in guppies (Torres-Dowdall et al. 2012; Handelsman et al. 2013). 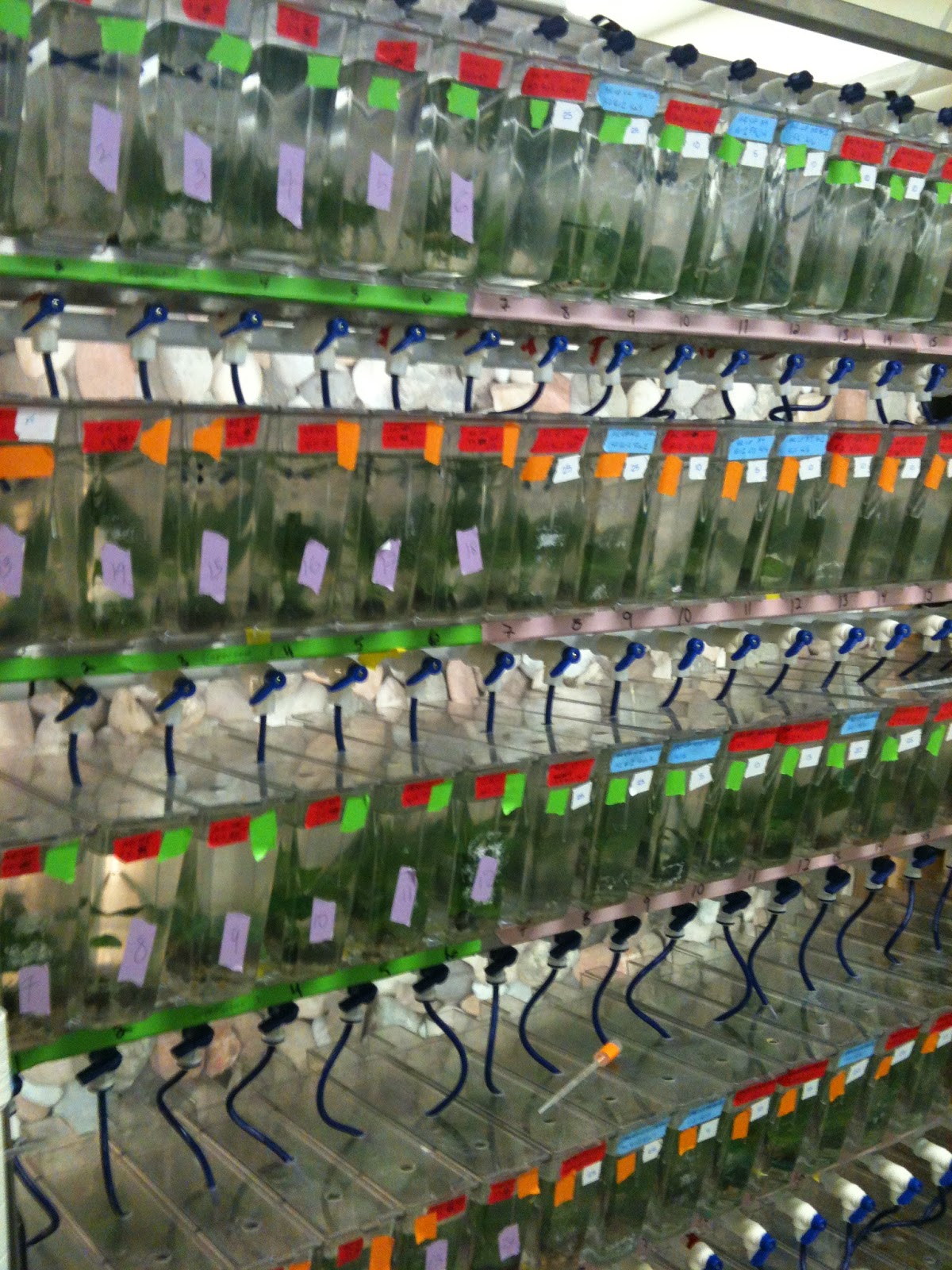 Our zebrafish tanks, which we’ve modified to be guppy tanks as inspired by Ghalambor, Handelsman and Ruell at Colorado State. 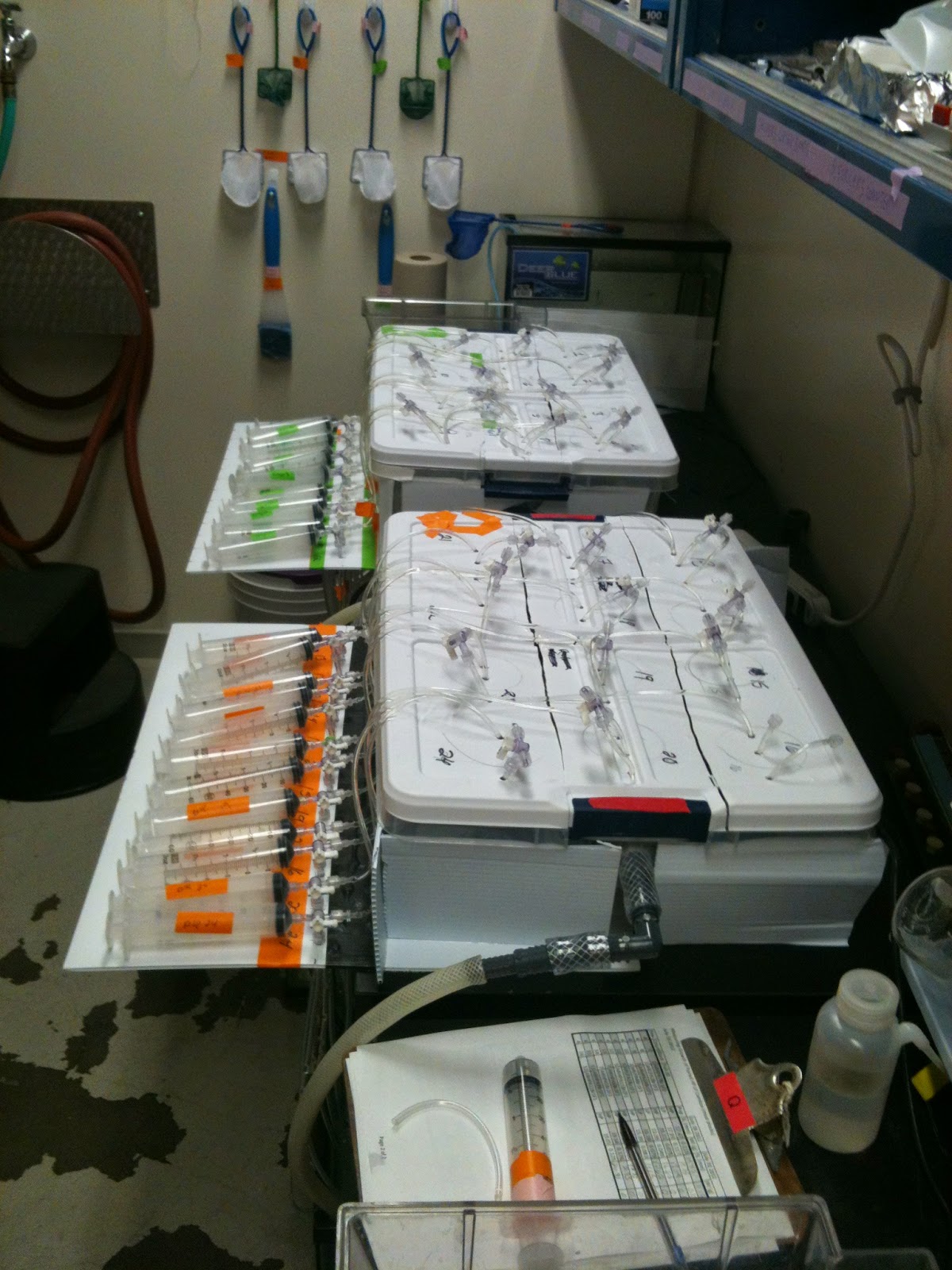 The “Excretionator 2000”, a device designed to enable collection of fish excretion samples with minimal invasiveness. Each basin contains water either with or without predator risk cues, pumped through each container continuously.

Contrary to our expectations and the results obtained in grasshoppers by Hawlena and Schmitz, guppies reared under predator cues excreted less N than guppies reared in predator-free control water. In fact, guppies reared with predator cues excreted nearly 40% less N than controls. Largely, this difference was due to cue-exposed guppies consuming less food in the presence of the predator cue (less consumed food = less N available to excrete). Independent of differences in their food consumption or size, though, cue-exposed guppies still excreted 10% less N than control guppies. Unlike grasshoppers, which accelerated processing and excretion of N under predation risk, guppies slowed N processing and excretion under risk.

Our measurements of growth efficiency suggest there may be an adaptive benefit to the lower N excretion of predator-exposed guppies: increased growth efficiency. Cue-exposed guppies retained N more efficiently than control guppies (20% more), despite consuming less food and growing more slowly overall. It is intriguing to speculate as to whether, in the presence of predator cues, guppy metabolism changed from one maximizing growth rate – rapidly producing new tissue at the cost of high consumption and high waste production – to one maximizing growth efficiency – slowly accreting new tissue but with low rates of food consumption and waste production.

Support for the adaptive benefit of lower N excretion comes from research on the physiology of food deprivation. Animals, ranging from fish to mice to birds, disproportionately reduce their N metabolism when faced with decreased food rations (McCue 2010). This shift in metabolic fuels spares amino acids and increases catabolism of lipids, enabling starving organisms to maintain muscle mass despite limited access to dietary amino acids. Predator-exposed guppies, in this case, may be responding more strongly to the physiological challenge of food deprivation than to the direct risk imposed by predators, which would be predicted to accelerate N catabolism, excretion, and tissue depletion. We suggest two general and competing predation-related influences impact the physiology of predator-exposed prey: (1) direct risk from predators accelerates N cycling, excretion, and tissue N losses, while (2) reduced feeding under predation risk, a common behavioral change caused by predators, slows nutrient cycling and excretion, increasing N retention in tissues.  (See table below; click on it to see it at larger size.)

Determining how much to pee when predators lurk

So how much should you excrete when faced with a predator? We suggest that depends on how well stocked your safe room is. If prey can shelter from predators in habitats that have abundant food resources, it may be adaptive for them to accelerate N cycling to maximize the energy available for predator encounters. The cost of their accelerated metabolism – increased loss of valuable amino acids – would be offset by the availability of amino acids in the abundant foods. If, however, prey do not have access to food in refuges, increasing N metabolism will only accelerate the negative fitness effects of starvation. For organisms facing food restriction in refuge environments, slowing N metabolism has a two-fold adaptive benefit: (1) it maintains valuable muscle protein under restricted feeding opportunity, and (2) it minimizes the amount of time spent feeding in vulnerable habitats.

In total, we found evidence that predators are central to consumer-mediated nutrient cycling, but we also found that the direction of the predator effect may depend on the environmental context of predator-prey interactions. In ecosystems where important nutrient recyclers shelter from predators in safe but food-restricted refuges, predation risk may reduce N excretion, slowing the supply of limiting nutrients to the base of the food web. Though our result runs counter to the notion of a single, general effect of predators on nutrient cycling by their prey, it also indicates that, by taking into account the natural history of predator-prey interactions, we may be able to more accurately predict how changes in predator communities will impact the function of ecosystems.

We are continuing our studies of guppies to explore how their metabolic responses to predation risk vary over time and with the variable evolutionary history of predators and prey.  By learning more about this interesting trait, we hope to help researchers in the quest to understand and predict how fish might function as fertilizers in streams across the globe.