How species coexist in nature is one of the long-standing questions in evolutionary ecology. This is particularly relevant for understanding the process of adaptive radiation, which is thought to explain a large portion of the Earth’s biodiversity.

Adaptive radiation often results in a large number of coexisting, closely-related species that share (or compete for) similar resources, environments, or habitats. In these circumstances, several outcomes are possible. For instance, species could be maintained in sympatry by specializing on different portions of the resource spectrum (niche divergence), which could lead to character displacement and reduced gene flow between competing species. A second possible consequence is exclusion, in which a species is extirpated by its similar but more efficient competitor species. Finally, a third possible consequence is fusion, in which coexisting species sharing similar resources show large niche overlap that increases interbreeding between the diverging species. This suggests that the evolution of niche differences (e.g., low diet overlap) is an important mechanism maintaining divergence in sympatric, closely related species. Interestingly, this assumption of niche divergence is not always met when quantifying niche overlap in nature.

If closely related species are to persist even in the face of large niche overlaps, additional mechanisms are needed to promote coexistence while reducing the likelihood of fusion or exclusion of competing species. Some of these mechanisms include the interaction between temporal and spatial variation in niche overlap in highly heterogeneous environments.

In our recent study, published in the Journal of Evolutionary Biology, we set out to understand the combined role of these two factors by looking at spatio-temporal variation in the dietary niches of four coexisting species of Darwin’s ground finches from Santa Cruz Island, Galápagos, Ecuador. Specifically, we analyzed over 7000 feeding observations collected over a 5-year period (2003–2005) at three different sites on Santa Cruz Island (El Garrapatero, Academy Bay, and Borrero Bay). We also quantified available food resources at the three sites during three years.

Darwin’s ground finches on Santa Cruz Island provide a nice system to study spatio-temporal variation in diet niches within a young adaptive radiation. There are four closely-related species persisting in sympatry on the island: the small ground finch (Geospiza fuliginosa), the medium ground finch (G. fortis), the large ground finch (G. magnirostris) and the cactus finch (G. scandens). These species also show high variation, both morphological (bill size and shape) and functional (bite force), often with overlap among the species (Fig.1). These species show evidence for niche conservatism, given that they all exploit basically the same set of food resources (seeds and insects), but their niches are thought to diverge along the axes of seed size and hardness (Fig. 1). 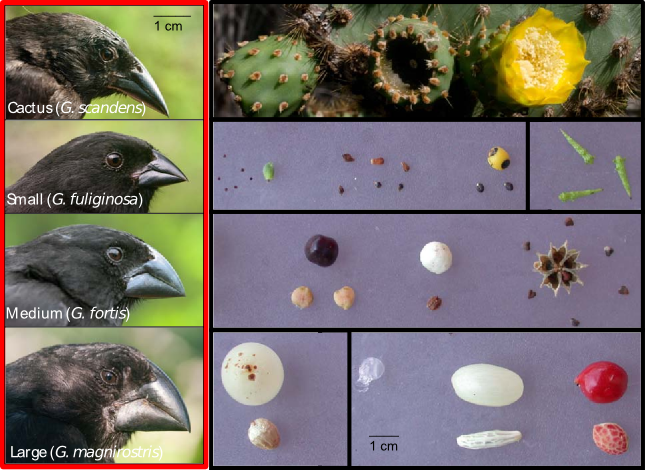 
Santa Cruz Island also presents an ideal ecological setting to test for these factors. Santa Cruz is the second-largest island of the Galápagos and probably one of the most ecologically heterogeneous of the archipelago. This island is characterized by variable climatic conditions (wet and dry periods) influenced by the wind currents and the effects of El Niño. These climatic factors, together with the geographic position of this oceanic island, promote large spatial variation in vegetation, which is expressed in the form of vertical zonification of the plant community, as well as variation among sites in the lower part of the island (Fig. 2).


Our results showed that ground finches largely overlap in their dietary niches, and this overlap is often larger than anticipated from random expectations, indicating that these birds are typically generalists or opportunists in their feeding habits (Fig. 3). However, we also found that each species frequently exploits a set of food items to which its morphology is best adapted (for some examples, see Fig. 1). We call those sets of food items “private resources”, and we argue that they could have important implications for niche partitioning in Darwin’s finches. For instance, we observed that the use of private resources increased in periods of resource scarcity (the dry season), leading to an overall decrease in niche overlap among species. We also observed that spatial variation in available resources could have a similar effect, given that species tend to exploit those private resources according to their availability in different sites on the island (Fig. 4). 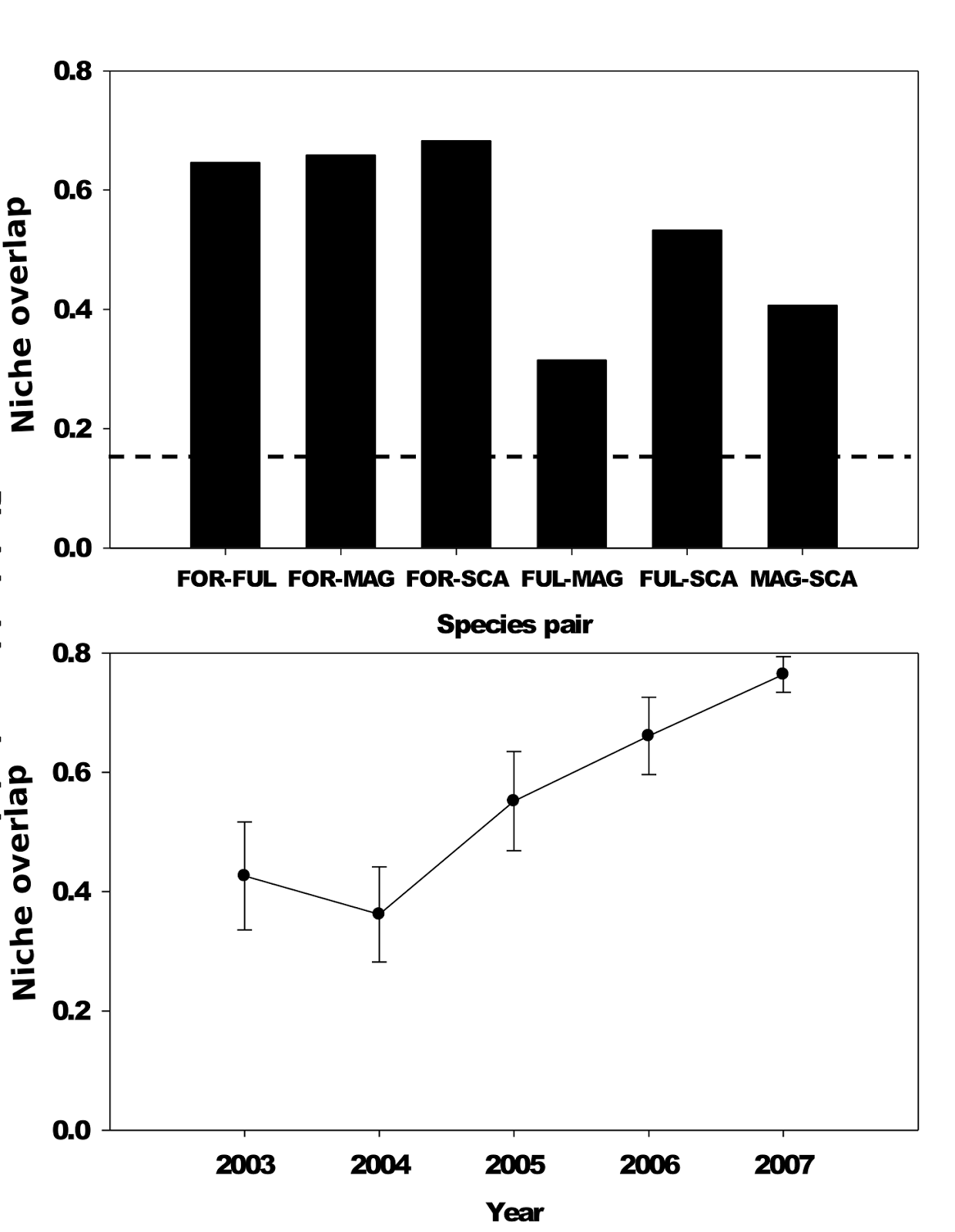 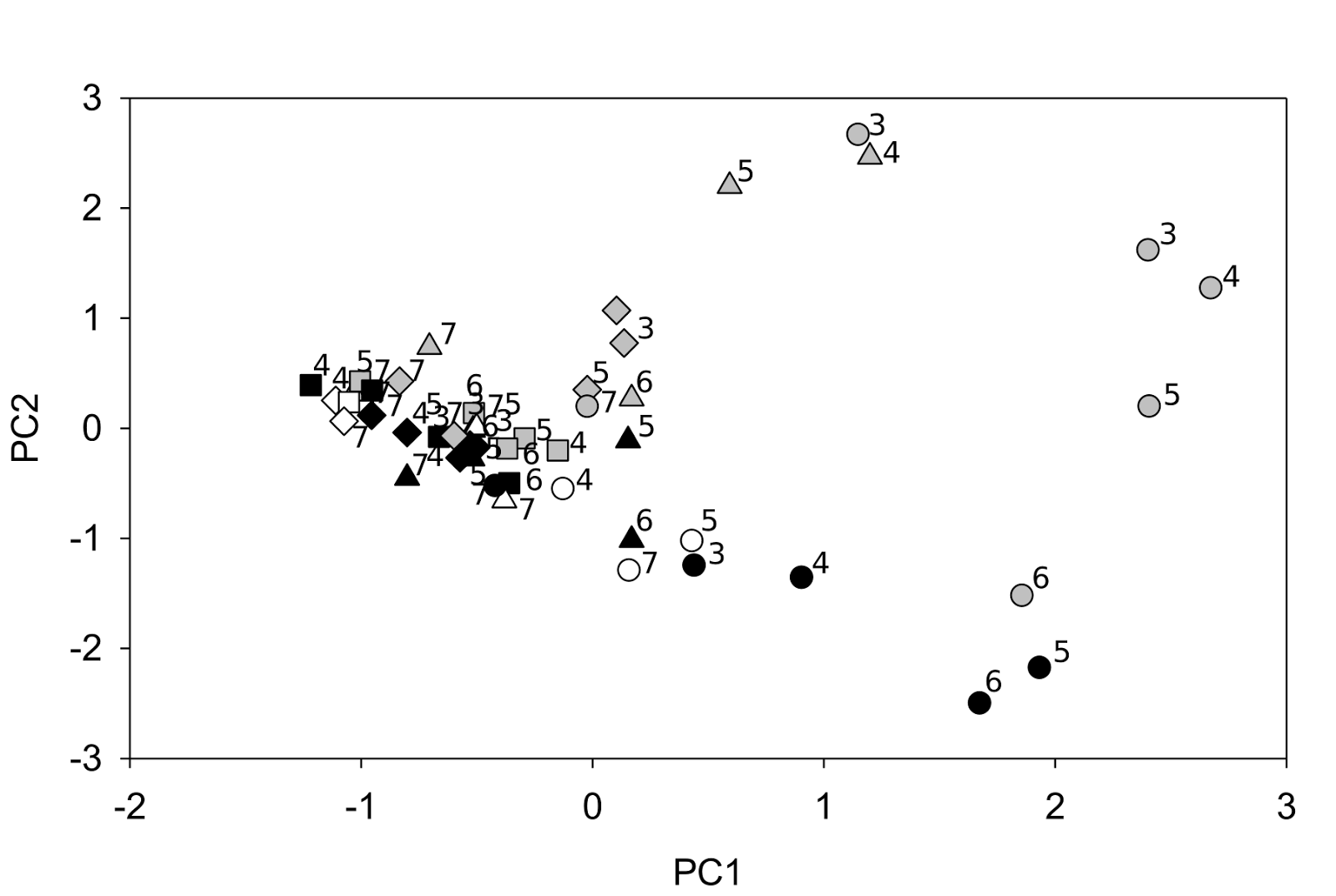 
We propose that Darwin’s ground finches correspond to a model of “imperfect generalists” in which species are able to converge on a wide range of easily accessible food items in times or places of high resource availability, but can also retreat to private resources in times or places of scarcity. We discuss the implications of imperfect generalism in determining regional coexistence of closely-related species sharing similar resources, and consider how a spatiotemporal approach to niche partitioning could further our understanding of species coexistence in nature.