[ This post is by Patrik Nosil, Zach Gompert, and Victor Soria Carrasco; I am just putting it up. –B. ]

It is well appreciated that some regions of the genome are more differentiated between populations or species than others. Indeed, a study of genomic divergence in 2005 found that significant genetic differentiation between M and S forms of the mosquito Anopheles gambiae was primarily restricted to just three regions of the genome, and these regions were dubbed ‘genomic islands of speciation’ (see Turner et al. 2005, PLoS Biology). It was initially assumed that these genomic islands harbored loci under divergent selection or those that generate reproductive isolation, and thus that they were central to speciation. Evolutionary biologists enthusiastically set out to find genomic islands in other species, and the genomic islands metaphor became an organizing concept in speciation research.

However, the initial intellectual excitement provided by the concept of genomic islands has progressively cooled down in the face of increasing scrutiny. First, whereas genomic islands have been identified in some species, apparently other species lack them. Strikingly, even the case for a small number of genomic islands in Anopheles gambiae has been questioned because whole-genome sequencing revealed many more genetic differences than found by earlier studies examining a subset of the genome (e.g., see Lawniczak et al. 2010, Science). Second, there is also some discrepancy among biologists about what does or doesn’t constitute a genomic island. Third, it has been argued that genomic islands are not necessarily evidence of divergent selection or differential gene flow, since they can occur for many other reasons, and that they might often be incidental, rather than instrumental, to speciation. A recent review article that also re-analyzes existing genomic data highlights all these issues to argue that genomic islands may often be indicative of post-speciation processes, rather than differential gene flow between taxa caused by divergent selection (see Cruikshank and Hahn, Mol. Ecol. 2014).

In this context, we embarked on a search for genomic islands between host-associated ecotypes of the stick-insect Timema cristinae so that we could quantify the role of divergent natural selection in generating any islands we might find. These stick insects are a nice system to do this in (see previous posts about eco-evolutionary dynamics in Timema and experimental genomics in Timema), because they provide several tractable avenues to ask about selection’s effects on genome divergence. Timema cristinae populations have repeatedly adapted to two different host plants, Adenostoma and Ceanothus (see drawings below), which in turn has lead to the repeated evolution of reproductive isolation (a process dubbed ‘parallel speciation’). This parallelism could result in parallel genomic islands, which would strengthen the argument that genomic islands are a product of divergent selection and key to speciation. Importantly, these host ecotypes are in the early stages of speciation and still undergo substantial gene flow, making post-speciation processes an unlikely explanation for any observed genomic islands. These stick insects can also be used to execute field experiments; they can be moved from one host plant to another, providing another avenue to test selection’s role in generating genomic islands. 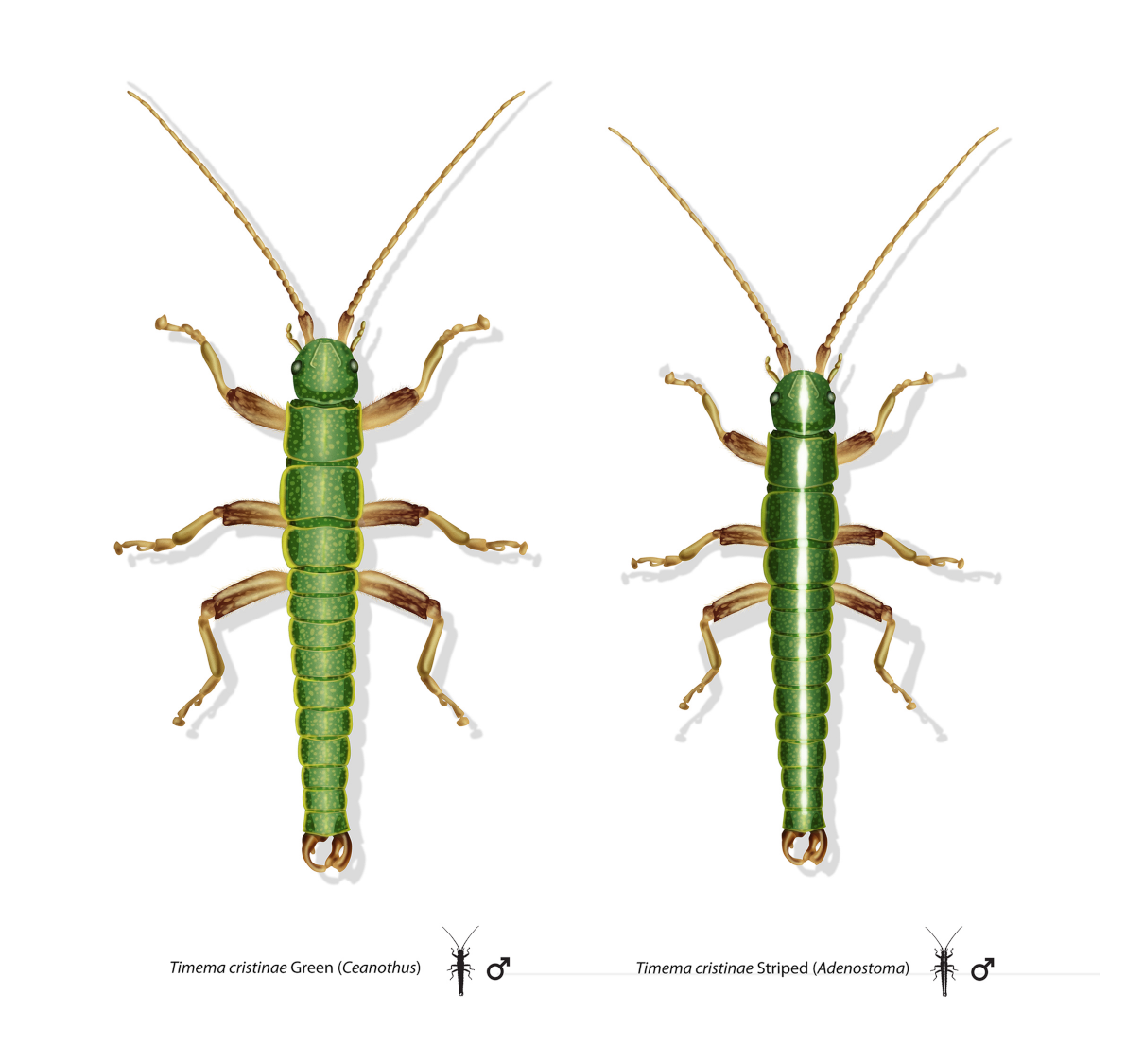 
But before we could ask if genomic islands hold the key to understanding speciation in T. cristinae, we had to figure out whether they existed, and so we set out in search of islands of divergence between the T. cristinae ecotypes. As with most genomic projects, one of the first steps was creating a reference genome. This was done by sequencing libraries of various insert sizes and carrying out a de novo assembly of the resulting sequencing reads (done by Alex Buerkle), followed by linkage mapping to order the scaffolds onto linkage groups (done by Zach Gompert). The genome was then annotated by Victor Soria-Carrasco, a computational biologist in the lab at the University of Sheffield. Upon obtaining this annotated genome, we conducted whole genome re-sequencing of 160 individuals from four replicate pairs of the Adenostoma and Ceanothus ecotypes of T. cristinae.

Population genomic analyses then ensued, led by Zach Gompert. We used a Hidden Markov model to search for genomic islands. This is a cool approach that has only recently been used to search for genomic islands (in humans), and that really lets the data speak for itself. We found that there were indeed thousands of differentiated genetic regions between the population pairs. When we examined these regions in more detail, we found that even the most differentiated ones were not extremely differentiated (e.g., contained no fixed differences). This doesn’t really fit the original view of genomic islands, but rather suggests ‘riffles’ or ‘bumps’ of differentiation along a genomic landscape characterized by fine-scale heterogeneity in divergence. Nonetheless, these ‘bumps’ on the genomic landscape could still be central to speciation... 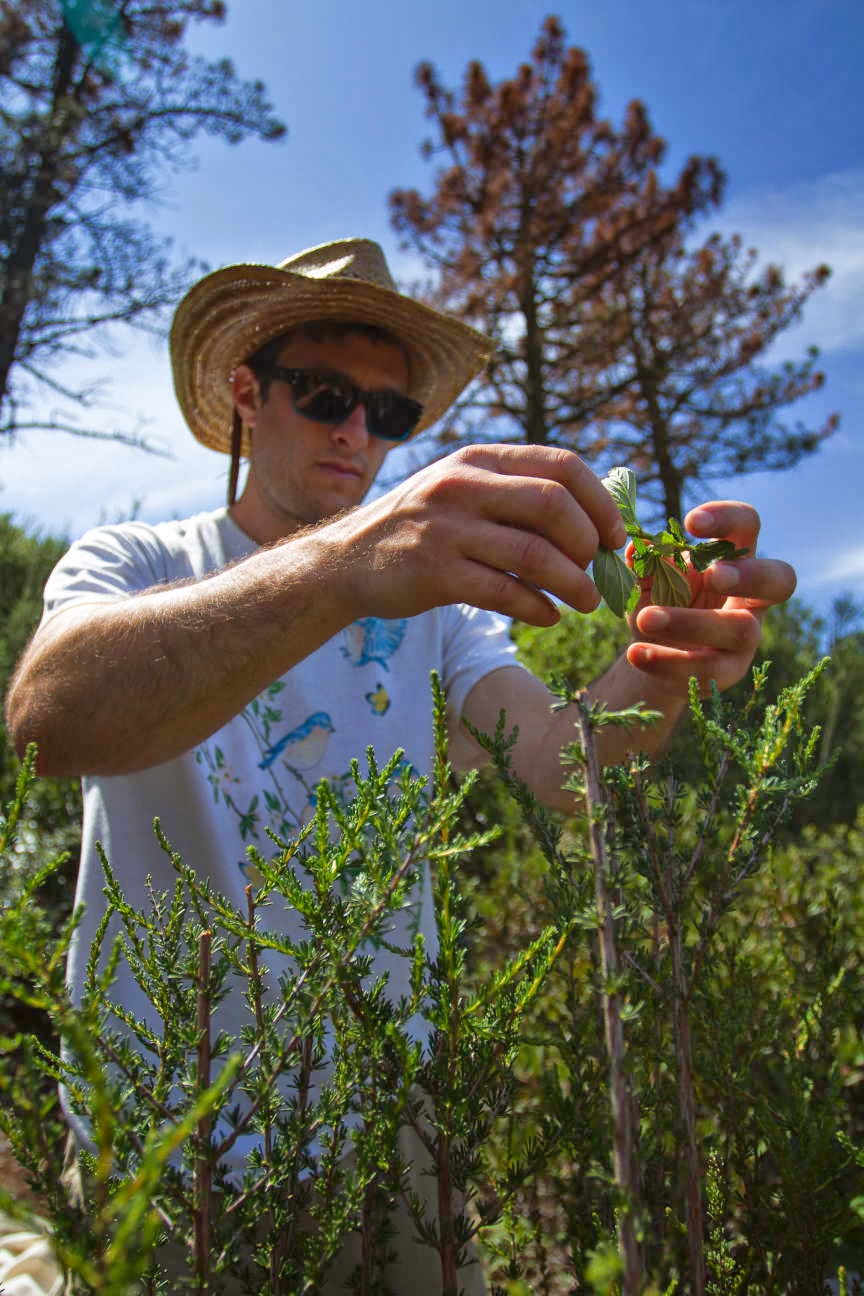 Figure 2. Tim Farkas, a PhD student in the Nosil lab, setting up a field transplant experiment.


The experiment provided evidence that these high divergence regions are, at least in part, created by divergent selection. Luck was on our side and we were able to publish the findings in Science. We even graced the cover with a fantastic photo of Timema taken by Moritz Muschick. Our findings provide evidence that the metaphor of genomic islands might not be fundamentally flawed – there are regions of accentuated divergence in the genome which can be subject to divergent selection, and thus are also likely subject to differential gene flow. However, the results also highlight that the process of genomic divergence and the patterns created during this process can be nuanced. Only with further studies, including experimental tests of selection and unbiased quantification of genome-wide differentiation, will the true nature of speciation become better understood.