Pupfish on the adaptive landscape, or: How I learned to stop worrying and love the cable tie

Like most evolutionary biologists, when I think of evolution I imagine rugged mountain landscapes, as Carl Zimmer eloquently introduced the concept of the adaptive landscape. Try to imagine a vast landscape connecting the phenotypes of all organisms where spatial location indicates a particular phenotype and the terrain – the height at any particular location – corresponds to the fitness of each individual phenotype (a Simpsonian landscape) or genotype (the original Wrightian landscape from 1932) along this space. The species we observe in the wild are expected to sit on the tops of fitness peaks, isolated by fitness valleys from neighboring fitness peaks corresponding to other species: alternative phenotypes capable of surviving and reproducing in the same environment. In reality, of course, this picture is even more complex: environments fluctuate, phenotype and genotype ‘surfaces’ are high-dimensional, fitness is frequency-dependent, many-to-one mapping is pervasive, and fitness may continue to increase indefinitely even on the tops of ‘peaks’; the adaptive landscape may resemble something more like the foaming surface of the ocean than a stable mountain range.

Nonetheless, the adaptive landscape is a powerful metaphor that pervades evolutionary thinking. But it is also an empirical quantity that can be measured in the wild. Since Lande and Arnold’s watershed insight that fitness landscapes can be estimated directly, there has grown an enormously successful research field measuring fitness in natural populations. There are now hundreds of studies measuring the strength and form of selection within natural populations in the wild. These have provided many novel insights about how selection acts in the short term, and have posed new paradoxes, such as why there is an abundance of disruptive selection despite our expectation that most species should sit on fitness peaks and thus experience stabilizing selection.

However, most of these studies measured selection within a population at one or two time periods. Few studies have repeatedly measured fitness within the same environment or across multiple environments. Fewer still have measured fitness landscapes across multiple species or for the intermediate phenotypes between species. Yet, this is exactly the data we need in order to understand past evolutionary trajectories and make predictions about the future. Our understanding of the larger-scale features of fitness landscapes – those peaks and valleys connecting multiple species that we all so vividly imagine – is still in its infancy.

Ideally, to increase our understanding of these large-scale features of the adaptive landscape, we need systems that are not only rapidly speciating and undergoing major morphological and ecological transitions, but that are also amenable to laboratory hybridization and transport in order to measure the fitness of intermediate hybrid phenotypes rarely observed in the wild.  A small, charismatic group of fishes named after puppy dogs (they love to beg for food and wag their tails) offer all of these features: Caribbean pupfishes! It is indeed possible to breed thousands of hybrid pupfishes in the laboratory in a month and then transport these offspring in your checked luggage back to the tropics to measure their fitness in the wild. This was my dissertation research project.


Within saline lakes on the tiny island of San Salvador in the Bahamas, two ecological specialists and a generalist pupfish have rapidly evolved from a generalist algae-eating common ancestor within the past 10,000 years. Importantly, these species are still in the process of speciating and adapting to novel ecological niches, so measuring the relevant environment driving adaptive radiation is still possible. Secondly, all three species live and breed within exactly the same benthic littoral habitat, which means that any differences among the species cannot be attributed to different habitats or allopatric isolation; rather, they result from the distinct niche environments that these species experience within the same habitat. Third, this young sympatric species flock has all the features of a classic adaptive radiation: (1) morphological diversification rates 50 times faster than background rates, (2) novel ecological niches, with one species specialized for tearing the scales off other pupfishes (Video 1) and another specialized for crushing hard-shelled prey with a unique nasal appendage, and (3) fitness experiments measuring hybrid growth and survival in field enclosures that demonstrate that multiple fitness peaks due to competition are driving adaptive radiation in the wild.


Video 1. Cyprinodon desquamator, the scale-eating pupfish, feeding on a euthanized generalist pupfish. Filmed at 2000 frames per second.  (You can also view the video at a larger size at http://adaptiveradiation.smugmug.com). 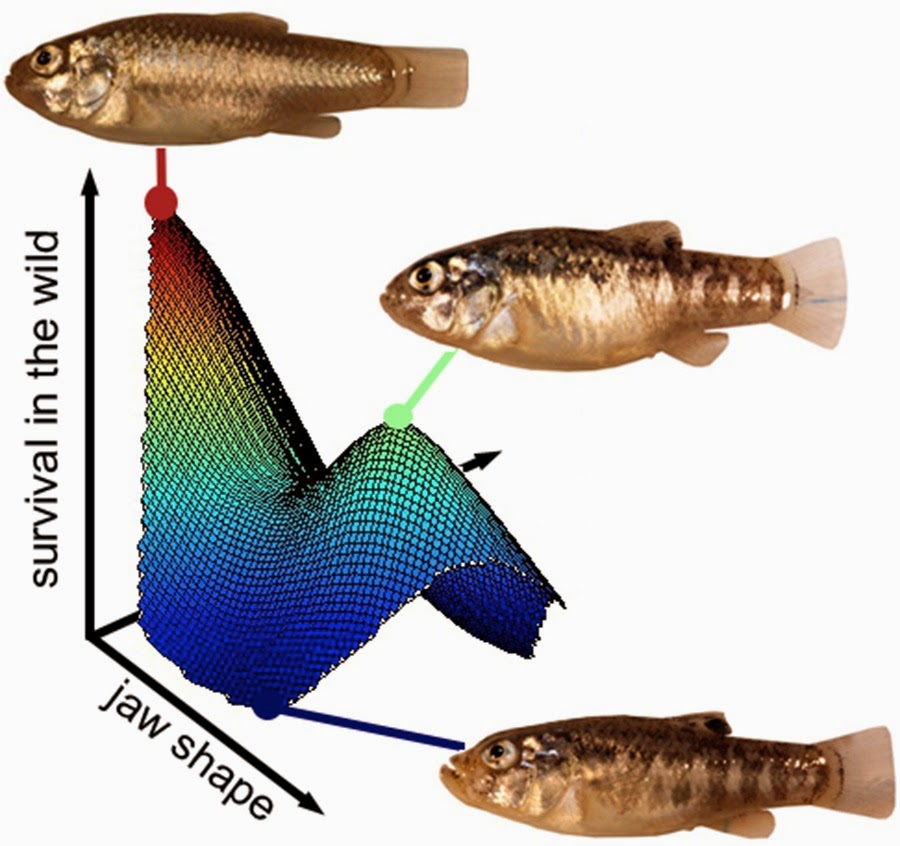 Figure 2. Complex snapshot of natural selection on San Salvador Island, Bahamas. Fitness landscape for survival estimated from the survival of F2 hybrids of all three pupfish species placed in a 12-foot field enclosure for 3 months. For reference, photographs show the phenotypes and position of the three parental species on the landscape: generalist, durophage, and scale-eater. Although I found no evidence of a fitness peak corresponding to scale-eaters, there is still strong evidence of a large fitness valley in this region of the morphospace.


These different-sized fitness valleys on the adaptive landscape predict that gene flow between scale-eaters and generalists should be much lower than between hard-shelled prey specialists and generalists. I tested this prediction in my new paper in Molecular Ecology. In my first foray into next-gen sequencing, I used double-digest RADseq (specifically, the Elshire et al. 2011 genotyping by sequencing protocol) to genotype over 13,000 SNP’s in all three species of pupfishes on San Salvador from seven different lakes where at least two species coexist. Fortunately for me, my collaborator Laura Feinstein, a grad student in Ecology at UC Davis, already had this protocol up and running and showed me the ropes. Our study of genetic differentiation supported predictions from the empirical adaptive landscape. I’ll quickly summarize and speculate about our results below.

Across all lakes surveyed, scale-eaters were more genetically differentiated than hard-shelled prey specialists within the same habitat, despite ongoing gene flow in both species. This pattern can be understood with knowledge of the underlying fitness landscape: stronger selection against scale-eater hybrids provides a greater barrier to gene flow than moderate selection against hard-shelled prey specialist hybrids. Furthermore, this pattern of genetic differentiation was consistent across many lakes on the island and many rare dispersal events of these specialist species, suggesting that it is driven by a consistent selective regime, rather than different histories of the two species. Although speciation in these two species is far from complete, the pattern so far suggests that these two very different foraging strategies are driving different rates of speciation.


2. Not all adaptation is the same

We often talk about adaptation in general such as understanding the genetic basis of adaptation or the role of adaptation in driving reproductive isolation. Instead, our results emphasize that the niche matters: not all adaptation is the same. Adapting to a “closer” niche on the adaptive landscape results in less selection against hybrids than adapting to a “distant” niche on the adaptive landscape. This difference in the strength of postzygotic extrinsic isolating barriers – perhaps the very first isolating barrier in this system – may drive different rates of incipient speciation between diverging ecotypes, even within the same habitat. Both specialist pupfish species are rapidly adapting to new resources in a new environment, but the specific performance demands of these very different resources affect the pace of speciation.


3. The niche shapes the topography of the adaptive landscape

The difference in the strength of selection against hybrids between these two specialist niches makes sense when we consider their contrasting performance demands. Specializing on hard-shelled prey, such as snails and ostracods, simply requires modifying a simple lever system (the jaws) for higher mechanical advantage. Furthermore, these prey are not evasive and are often consumed by generalists as well. In contrast, successful scale-eating requires high-speed strikes on evasive prey (i.e., other pupfish!). Furthermore, each strike only provides a small nutritional benefit – a mouthful of skin, mucus, and scales – so that each strike must be very efficient. Indeed, all specialized scale-eating fishes are size-limited relative to their prey. This suggests that scale-eating should require a highly specific and specialized phenotype for success, whereas successful snail-eating may require fewer modifications. These different performance demands might create different topographies on the adaptive landscape – larger fitness valleys, higher-dimensional changes, and steeper fitness peaks – that all result in stronger selection against scale-eater hybrids.


5. Is the rarity of a niche connected to speciation rate within that niche?

Finally, I’d like to take this opportunity to speculate wildly. Scale-eating is incredibly rare within pupfishes: to put this in context, the nearest species with convergent ecology is separated by 168 million years of evolution (my proposed index for measuring ecological novelty). I speculate that this rarity reflects an underlying distant, hard-to-reach fitness peak for scale-eating on the adaptive landscape. At the same time, a distant fitness peak surrounded by a large fitness valley results in much stronger selection against hybrids if a population is able to reach such a peak. If this association holds more generally, it suggests a positive correlation between the rarity of a niche and the rate of speciation within that niche: distant fitness peaks are hard to adapt to initially (resulting in rare use of the corresponding resource or niche), but if a population does colonize such a niche, it may evolve reproductive isolation much faster due to stronger selection against hybrids and reinforced pre-mating isolation. In other words, perhaps oddball ecological specialists speciate faster? Stay tuned!
By Ben Haller - April 15, 2014