A major focus of my research deals with understanding how human activities impact the long-term persistence of species and influence evolutionary and ecological processes. Human activities are increasingly recognized as a potent evolutionary force shaping contemporary patterns and processes among populations, species, and ecosystems. From size-selective harvesting and over-exploitation to the myriad consequences of urbanization, the evolutionary and ecological impacts of humanity on natural systems are pervasive. Consider the consequences of anthropogenic alterations to a species’ habitat. Habitat modification can threaten the integrity of young evolutionary lineages by smoothing rugged adaptive landscapes that promote and maintain diversification in sympatry. The loss of environmental heterogeneity via human activities can relax disruptive selection and can lead to the breakdown of nascent (intrinsic and extrinsic) reproductive isolating mechanisms, facilitating introgressive hybridization and the collapse of incipient species into a hybrid swarm (i.e., “reverse speciation”). Although species with deeper evolutionary histories are not immune to the evolutionary consequences of anthropogenic habitat disturbance, the formation of a hybrid swarm between divergent species that naturally occur in sympatry is not well established. Indeed, under these conditions, evolutionary theory predicts that reinforcement (in the “broad sense”; sensu Servedio and Noor, 2003) should sustain reproductive isolation among divergent lineages in sympatry and confer some level of resistance to habitat disturbance. However, my research with the Palkovacs Lab (UC Santa Cruz) on anadromous (i.e., migratory sea-run) river herrings suggests that this is not always the case.

Our research group at UC Santa Cruz, along with our colleagues at Duke University and Dalhousie University, recently examined the range-wide incidence of hybridization and patterns of introgression between alewife (Alosa pseudoharengus) and blueback herring (A. aestivalis), species that diverged up to 1 million years ago. Although anadromous populations of these species co-occur in numerous rivers along the Atlantic coast of North America, reproductive isolation is typically maintained by differences in spawning time and spawning habitat preferences. While differences in peak spawning time are subtle (2–3 weeks) and lead to considerable temporal overlap in rivers, alewife preferentially select lentic (i.e., still-water) habitats for reproduction, whereas blueback herring prefer lotic (i.e., flowing-water) spawning habitats.  However, the construction of a dam on the Roanoke River, Virginia, in 1953 resulted in the formation of landlocked populations of both species. This created novel conditions for alewife and blueback herring in Kerr Reservoir, and provided our research team with an opportunity to examine the effects of habitat disturbance on the frequency of hybridization and patterns of introgression between divergent species that naturally occur in sympatry. 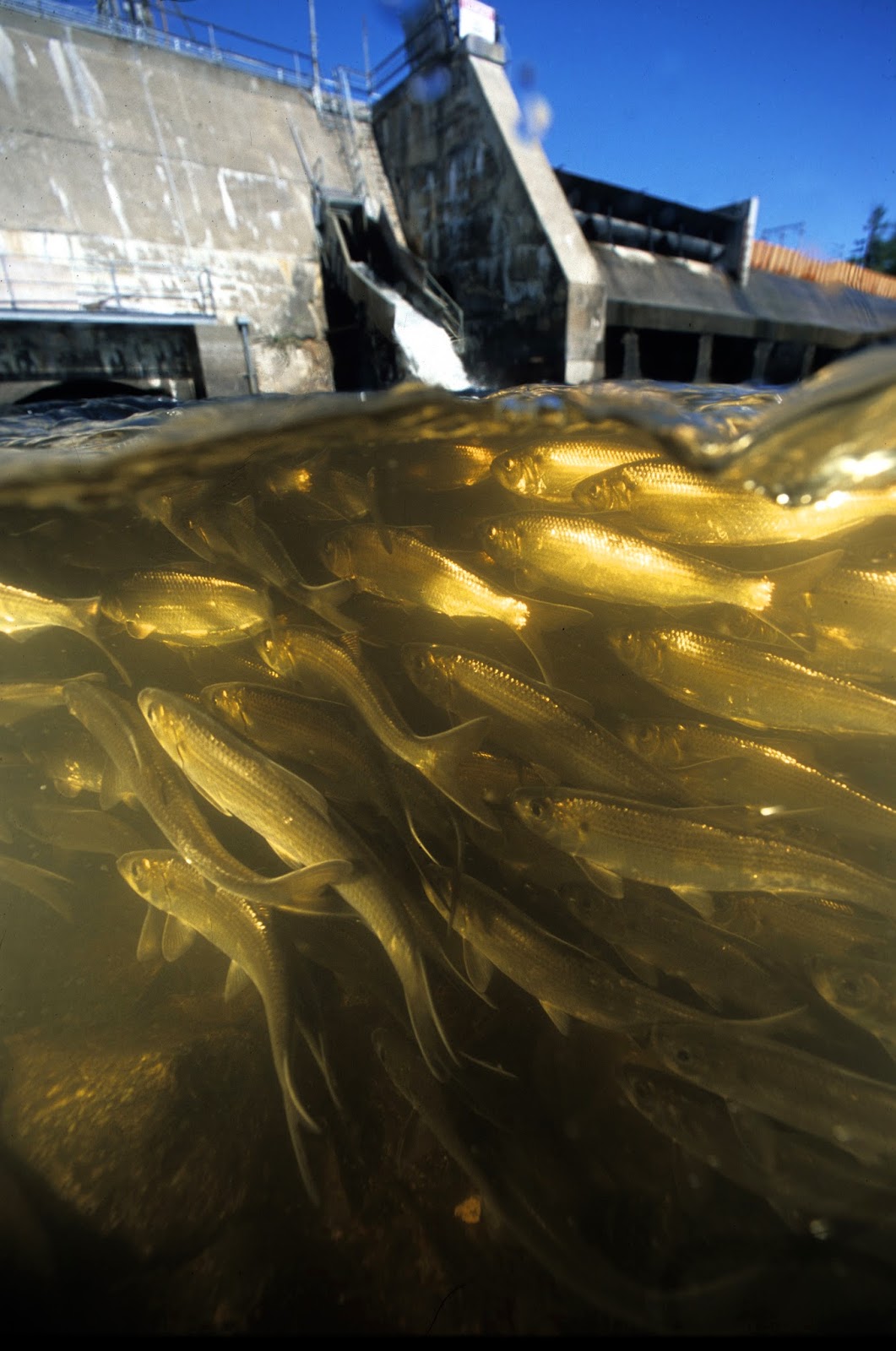 Fig. 1. Anthropogenic changes to habitat, like dams that block migratory anadromous fishes, have the potential to impact evolutionary and ecological processes.  Here, anadromous alewives school below a dam on the Damariscotta River, Maine (photo: Heather Perry).

Although the proportion of hybrids among anadromous populations was generally low (0–8%), all of the individuals in Kerr Reservoir (n=119) were deeply introgressed hybrids, and comprised a hybrid swarm. These results suggest that the pre- and post-zygotic reproductive isolating mechanisms that facilitate the maintenance of species integrity for anadromous parental populations may have broken down in Kerr Reservoir, and that there may not be selection against hybrids in this altered environment. The precise mechanisms that lead to the persistence of landlocked river herring hybrids are not currently understood.

While anadromous hybrids were intermediate in their genetic composition between alewife and blueback herring, landlocked hybrids exhibited genetic compositions that were clearly different from either parental species (see Fig. 2, below). While this suggests evidence for genetic divergence of landlocked hybrids in isolation from parental species, it is uncertain whether this may provide evidence for hybrid speciation in the future. The genomic clines analyses revealed striking differences in the patterns of introgression, with anadromous hybrids exhibiting neutral patterns of introgression, and landlocked hybrids showing directional introgression leading to an increased prevalence of alewife genotypes in Kerr Reservoir. 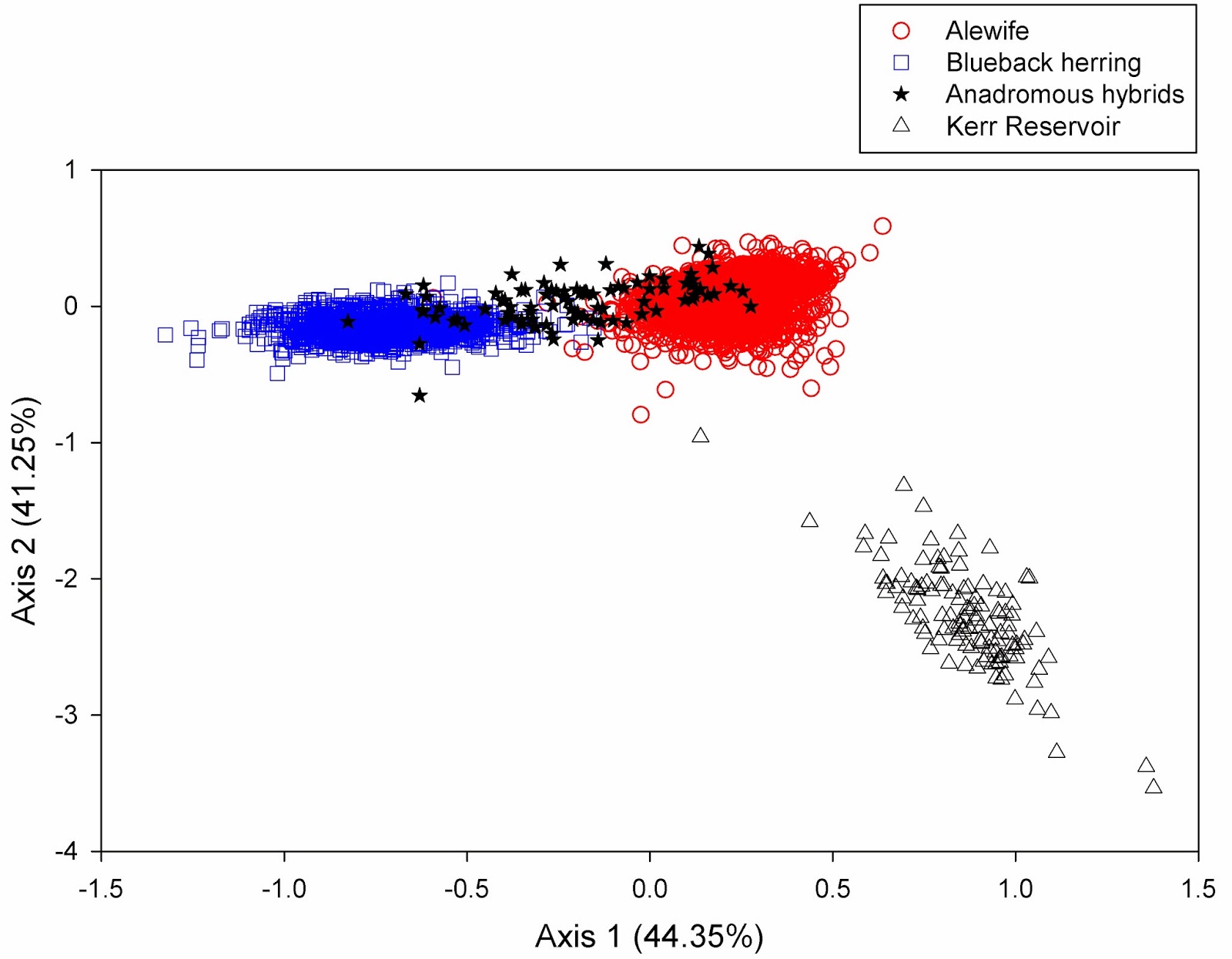 Our study reveals that anthropogenic habitat disturbance can break down reproductive isolation between divergent species that naturally occur in sympatry, and provides empirical evidence that reinforcement does not always sustain reproductive isolation under such circumstances. Dam construction constitutes a dramatic alteration to habitat, particularly for anadromous fishes, and may disrupt the processes that facilitate reproductive isolation and maintenance of species integrity. The removal of dams is often couched in terms of benefits to anadromous fishes and restoration of historic spawning runs. Our work suggests that dam removal can also help to maintain species integrity.