Solving the Paradox of Stasis

I've just had a paper with Andrew published in Evolution (presently in Early View), entitled “Solving the paradox of stasis: Squashed stabilizing selection and the limits of detection” (Fig. 1).  I think it might be of general interest, so I'm going to write a little about it here.  For much more, and lots of references, you can of course see the paper itself! 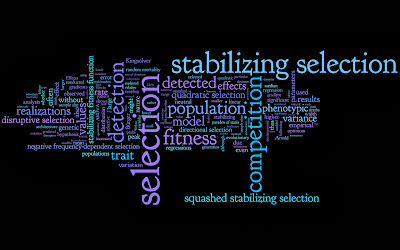 Figure 1. A wordle of our paper.


The paradox of stasis

The first question, of course, is “What is the paradox of stasis?”  It sounds like something from a sci-fi action movie (Fig. 2), but in fact it’s an observation about the fossil record.  As far back as Darwin, it has been observed that species in the fossil record often appear morphologically constant over very long timescales; that’s the stasis part.  This observation has been discussed extensively in the context of Gould and Eldredge’s “punctuated equilibrium” hypothesis, but regardless of what one thinks of the specifics of that hypothesis, the pattern remains in the fossil record, demanding explanation. 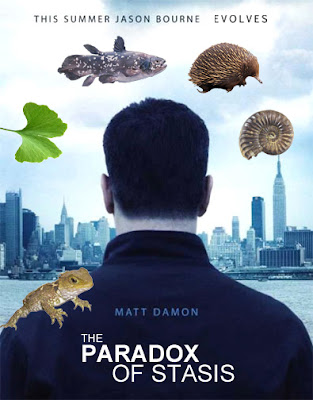 Figure 2.  The Paradox of Stasis, starring Matt Damon (and co-starring, clockwise from Damon's shoulder, a tuatara, a gingko leaf, a coelacanth, an echidna, and an ammonite).  Not coming to a theater near you any time soon.  Disclaimer: I am not a paleontologist, but yes, I realize that the use of “living fossils” here is not very scientific.  But it's funny, I hope, and it gets the point across.  For more rigorous examples of stasis in the fossil record, please see the academic literature.


As for the paradox part, it’s because the reason for this pattern of stasis is quite unclear.  With the world always in flux, with volcanoes and ice ages and floods and, of course, the ongoing race for fitness embodied by the Red Queen hypothesis, why would a species stay the same for such a long periods of time?  This paradox has only gotten sharper in recent years, with the frequent observation of contemporary evolution occurring before our very eyes.  If we can watch species in nature change rapidly, in response to environmental changes such as fluctuations in yearly rainfall – as the Grants documented extensively in Darwin’s finches – why does that rapid change not add up to visible change in the fossil record?  The more you ponder it, the more paradoxical it seems.


Detection of stabilizing selection in nature 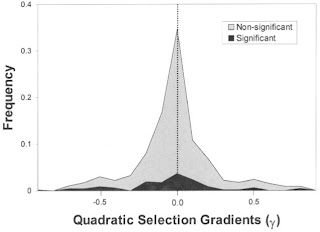 
This observation has been a major obstacle to the acceptance of stabilizing selection as a solution to the paradox of stasis.  Enrico Fermi famously asked, in regards to arguments that intelligent life ought to be common in the universe, “Where is everybody?”, and that question has come to be known as the Fermi Paradox.  Similarly, the results of Kingsolver et al. (2001), borne out by later meta-analyses with even larger samples, point to the question: “Where is all the stabilizing selection?”

That’s what we set out to answer.  To do it, we followed what Zurell et al. (2010) called the “virtual ecologist” approach: we simulated a population under stabilizing selection, and conducted simulated mark-recapture surveys on that population, and then used regression to measure the selection detected on it, just as a field biologist would do for a real population in nature.  Indeed, we did this a lot: we ran some 2,764,800,000 regressions, covering many runs of the model each executed for 50,000 generations.  This gave us a nice big dataset that told us about the pattern of detection of stabilizing and disruptive selection for many different combinations of model parameters.  The advantage of this modeling approach stems from the fact that we know that the population is actually under stabilizing selection, since we wrote the code.  That lets us find out what pattern of selection is detected on such a population, exploring the efficacy of standard methods for detecting selection.

Sometimes selection can be thought of as a constant function: given the phenotype of an individual, the function tells you the expected fitness of that individual.  For example, stabilizing selection means that extreme phenotypic values have low expected fitness, while intermediate phenotypic values, close to some optimum value, have higher expected fitness.  But sometimes selection is not a constant function like this; sometimes it depends on the phenotypes of all of the other individuals in the population.  This is called frequency-dependent selection (Fig. 4).  It is thought that frequency-dependent selection can be generated by many ecological interactions: competition, predation, parasitism, sexual selection, and environmental heterogeneity, to name a few.


So how does it work?  Competition is an easy example, so I'll use that.  Imagine that you're a bird, and there are different sizes of seeds in your environment.  You have a beak that makes you good at eating medium-sized seeds; the big seeds are too hard for you to crack, and you can’t eat small seeds fast enough to maintain your body weight (like a human trying to survive by foraging in a complex environment for one grain of rice at a time).  If many other individuals in your population also have medium-sized beaks, you'll have lots of competition for your food, and your fitness will likely be low.  If they all have beaks different from yours, though, then you're golden; they'll eat the small seeds and the big seeds, and you'll get all the medium-sized seeds you want.  So when your phenotype is common, your fitness is low; when it is rare, your fitness is high.  This is negative frequency-dependent selection, and although it is difficult to measure in nature, and has thus been confirmed in only a few cases, theory suggests that it ought to be very common.

As you might imagine, the details of our results get rather complicated, and I’ll refer you to the paper for them.  Here I’ll just jump right to the take-home points. 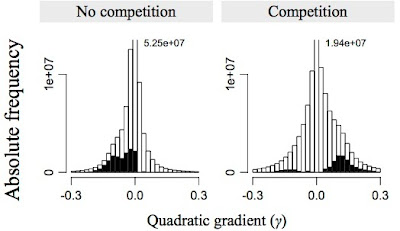 The other thing to notice in Fig. 5 is that without competition, when selection is detected it is usually stabilizing, but with competition, it is usually disruptive – even though the underlying stabilizing fitness function is still present.  This implies that the pattern of quadratic selection observed in nature (Fig. 3) could be explained if natural populations are sometimes subject to negative frequency-dependent selection and sometimes are not.  Otherwise, it is difficult to explain the frequency with which disruptive selection is detected in nature; as Fig. 5 shows, it is very unlikely to be detected on a population that is not subject to negative frequency-dependent selection.  (There are strong reasons to think that disruptive selection that is not due to negative frequency-dependence should be very rare in nature; see the paper for discussion.)


Solving the paradox of stasis

We do not, of course, solve the paradox of stasis in this paper; no theoretical paper could ever do that, since it is fundamentally an empirical problem.  What we have done is to remove a major objection to stabilizing selection as the solution to the paradox.  We have shown that if natural populations are commonly under stabilizing selection, and are also under negative frequency-dependent selection fairly often, the overall pattern of selection that we should expect to detect is, in fact, similar to the pattern seen by Kingsolver et al. (2001) – infrequent detection of quadratic selection, divided between stabilizing and disruptive.  Stabilizing selection could, therefore, be the cause, or a major cause, of evolutionary stasis.