I've just had a paper (my first first-author research paper, in fact!) come out in the American Naturalist, and it might be of interest to readers here, so I'll briefly discuss it here.  For more, see the article itself (citation and link at bottom). 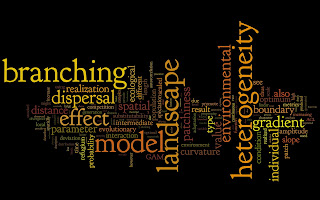 A "wordle" of this paper.  A nice way to see at a glance what the themes of a paper are!

Let me start with a bit of a plug.  This research was done at the International Institute for Applied Systems Analysis (IIASA), in Laxenburg, Austria, with my coauthors Ulf Dieckmann and Rupert Mazzucco.  I ended up there as a student in their Young Scientists Summer Program (YSSP) in the summer of 2010.  That fantastic experience, near the beginning of my PhD at McGill with Andrew, help to lay a conceptual foundation for my PhD thesis on "The role of heterogeneity in adaptation and speciation".  It was also simply a wonderful and formative experience, thinking and talking about big issues with a bunch of brilliant fellow students while working in a former summer palace of the Hapsburgs.  It was one of the best times I've had in my life – and note that IIASA will be accepting applications for the 2014 YSSP starting this October! 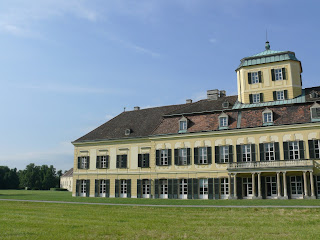 A small part of the schloss, or palace, in Laxenburg where I worked.  Marie Antoinette played in the belvedere tower as a child; it is painted with trompe-l'oeil garden scenes, to make the long, cold winters of Austria feel less oppressive.  Happily, the YSSP is in the summer!  Photo by Ben Haller.

OK, enough of that.  What of this new paper?  For that, I'm actually going to quote a press release I wrote for Am Nat; I wrote it to summarize the paper for a general audience, so it seems perfect to put in this blog, too.

It is imperative that we understand the processes that generate and maintain biodiversity, so that we can more effectively work to conserve that biodiversity for the future. In one such process, called “adaptive divergence”, spatial variation in environmental conditions can promote evolutionary divergence among populations, as each population adapts to its local environmental conditions. This process can ultimately lead to speciation (in sexual organisms) or so-called “evolutionary branching” (in asexual organisms). Previous theoretical work has examined this phenomenon in very abstract, simple environments. However, the effects of more realistically complex patterns of spatial environmental variation, like those found in real landscapes in nature, have never been investigated.

In the “refugium effect” demonstrated in this research, refugia created by patchy environmental variation can facilitate the evolutionary divergence of populations. Without patchiness, the variation in the environment can be too harsh to allow the organisms to explore, colonize, and adapt to different areas. Refugia due to patchiness can promote such exploration, colonization, and adaptation by providing “stepping-stones” that mitigate the harshness of the environment. This result is important for our understanding of the origins of the vast biodiversity on Earth, since adaptive divergence due to environmental variation is thought to have been a major cause of the biodiversity we see today. This research might also be important to the future conservation of that biodiversity, since it suggests that preservation of environmental variation, not just of “optimal habitat”, might be important to maintaining biodiversity.

That press release emphasizes the "refugium effect" portion of our findings, but there's lots more in the paper as well.  In particular, we worked hard to make our model empirically testable, by using metrics of landscape heterogeneity that could be applied to real landscapes.  It would be wonderful if some reader of this blog took up that gauntlet and empirically tested our model's findings in some real-world system!

Three views of one run of our model (click to enlarge).  Left: a complex landscape, generated by a method that we describe in our paper.  Note that there is, broadly, a gradient from red to blue "environment types" across the landscape from left to right, but there is also complex, patchy heterogeneity that has previously not been explored by theoretical models of speciation.  Center: A population of organisms that have adapted to local conditions in the environment.  Colors of organisms indicate the type of environment in which they are most fit; note that their colors match the color of the environment they inhabit to some extent, due to local adaptation, but that local adaptation is not complete, due to dispersal and stochasticity.  Right: The evolutionary history of the population depicted in the center panel, with time proceeding from left to right and phenotype shown on the y-axis (and also using color, as in the other panels).  Note the complexity of the evolutionary history; the central green branch (the ancestral type) went extinct, but the landscape can sustain orange and yellow branches that are quite ecologically similar, because of the pattern of heterogeneity in this particular landscape.

We have lots of ideas for extending this research in the future, beginning with making a sexual version of the model to explore how the effects of gene flow and recombination alter our results.  To me, it's an exciting area of research that tries to bridge the gap between theoretical and empirical views of speciation.  I hope you agree, and thanks for reading!