This post is by Philipp Hirsch - I am just putting it up. (Andrew)

When teaching ecology classes I frequently apply a method called concept-mapping. In concept-mapping assignments students are asked to connect different concepts on a sheet of paper with labeled arrows, thus outlining the interrelations among these concepts. I noticed that, if you wait long enough, every concept will be connected to every other. In addition to initially drawn solid arrows, over time, there are more and more dashed arrows drawn.  Students like to expand the assignment to include dashed arrows that indicate indirect interactions and feedbacks among concepts.

This very much reminds me of food webs. While some arrows e.g. between predator and prey are obvious (quickly drawn) there are a lot of indirect interactions between non-adjacent components in the food web (dashed lines that require a second thought). Such indirect ecological interactions are increasingly recognized as being ubiquitous and ecologically relevant. The question then becomes: What are the evolutionary consequences of indirect trophic interactions?

In a recent paper we addressed this topic. We asked how indirect effects of one species that cascade through the food web can contribute to the early stages of adaptive divergence. As a model species we used perch which show a clear phenotypic divergence between littoral and pelagic forms. The magnitude of this divergence is dependent on the availability of profitable habitat-specific resources. Feeding on these resources leads to a specialization of perch morphology to resource-acquisition, mainly through phenotypic plasticity. To study how this phenotypic divergence is affected by indirect interactions we compared perch from lakes in Sweden that were either pristine or invaded by the zebra mussels. 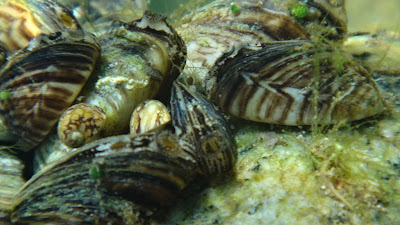 Perch do not feed on zebra mussels. Zebra mussels affect both the benthic and pelagic food base of lakes by filtering nutrients from the water column and providing a surplus of structure and nutrients on the bottom. Their filtering activity also increases water clarity. We therefore hypothesized that zebra mussels indirectly increase the phenotypic divergence between littoral and pelagic perch by increasing the habitat-specific food resources for perch.

We suspect that indirect interactions between zebra mussels and perch could have triggered this increase in divergence. We considered two main causes of how the mussel-mediated resource changes might indirectly affect perch divergence. First, increases in littoral and pelagic resource density might allow for stronger plastic responses and therefore better adaptation of pelagic and littoral individuals to their different environments. Second, increases in water clarity and resource density might increase disruptive selection acting on morphology -although direct evidence is lacking.

The stronger plastic response in perch from lakes with zebra mussels plausibly results from the surplus of energy-rich invertebrates and zooplankton that specialized phenotypes can exploit in mussel-lakes. A higher growth rate in perch allows for a faster modulation of body shape to better fit the feeding mode. Costs of phenotypic plasticity should also be lower when profitable resources are plenty.

The possible change in disruptive selection regime in mussel-lakes is more complex and partly counter-intuitive. Most studies predict that increasing resources (as seen here in lakes with zebra mussels) should reduce disruptive selection. The puzzling question is how disruptive selection can be more pronounced in lakes with zebra mussels, given the higher resource densities. We propose that the combination of higher water clarity and higher resource density might enhances the connection between diet and morphology. Recently, we could show that if the water is clearer then resource use as well as morphology are more divergent between littoral and pelagic perch (Bartels et al. 2012). The stronger connection between diet and phenotype in mussel-lakes might then affect the selective regime i.e. the “disruptiveness” increases favouring extreme littoral and pelagic phenotypes (with more specialized diet and morphology) and disfavouring intermediate ones. However, at present this remains an educated guess and an exciting field for future research. In any case, on the concept map of the studied lakes the drawing of at least one dashed line between zebra mussels and perch is certainly warranted.