Bloggy worms? Why worms? Let’s start this post with a small review. Since its start in 2009, the number of contributions on this blog talking about worms, more specifically parasites, has been skyrocketing: 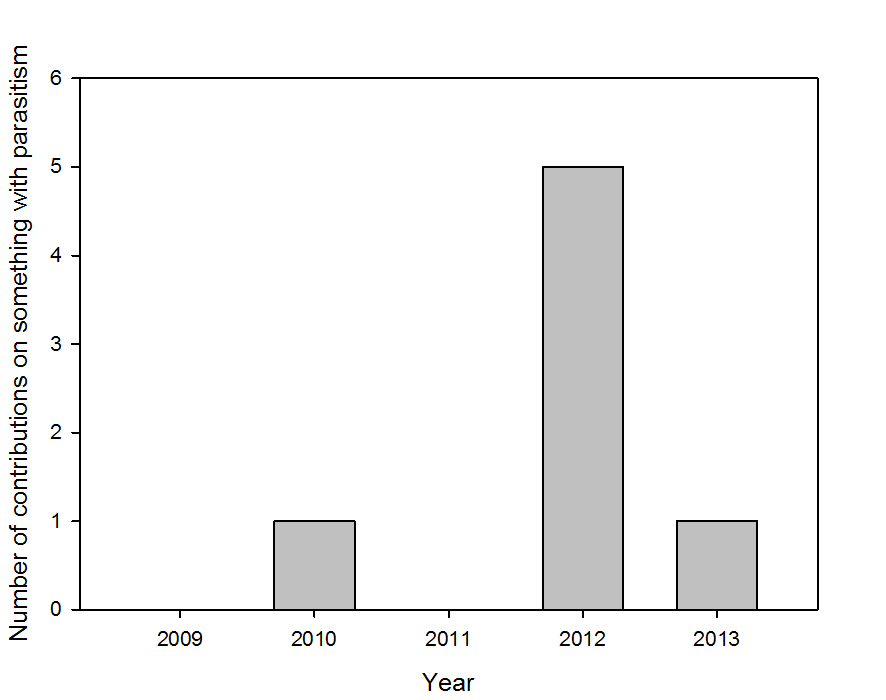 SEVEN POSTS!  How come nobody else reviewed this before? The narrowness of the field alone is already interesting enough for further investigation. So here we go. The word “parasite” was first posted on this blog by Joost (2010) in a list of potential mating barriers in lake-stream stickleback . Great,  I’m the founder of the field – that’s obviously why I’m reviewing it. By the way, other blogs blogging on parasites were out of the scope of this review, because I anticipated that their main message would be that parasites are everywhere. Which we already know and would probably be confirmed once more by running into a computer virus while surfing to these blogs. Parasite-induced dispersal limitation in silico.

After introducing a new discipline on a blog it always takes a while until some dude picks up the term, adds some drama and generates a hype. Indeed, it took more than a year until Andrew (2012) picked up the idea of parasitism, and blogged about cruel maggots (Philornis downsi) sucking blood out of baby finches in Galapagos. From an eco-evo perspective he speculated that this worm might induce the evolution of resistance or tolerance in finches, which then would impact the population dynamics of the finches. And the hype was born.

Shortly after, Felipe (2012) couldn’t resist blogging about “Parasites, guppies and predation”, explaining that there are reasons to assume that when guppies adapt to predation, they might also have to adapt to parasites. But, as parasites (in this case the ectoparasitic flatworm Gyrodactylus) might as well adapt to guppies (i.e. coevolution),  the relationship between adaptation to predators and adaptation to parasites might actually become weak or invisible. Kiyoko (2012) then tried to be almost as original with her title, “Guppies, predators, and parasites”. She challenged the classical view that coloration in natural guppy populations differs between sites because of different predation pressures, whereas it could be as well other factors, such as – have a guess –  parasitism. An effect of parasites (again Gyrodactylus) turned out to be absent (or hard to detect) in her study, but predation alone clearly could not explain the observed variation in coloration.

Usually, some people then start posting no matter what to be part of the hype.  The post by Ben (2012) is clearly an example of that, wondering whether  “[...] theory and data have a mutualistic relationship, or a commensal relationship, or a competitive relationship – or is one perhaps even a parasite of the other?” Nice try Ben. But the next wormy blogger was Victor (2012), talking about how parasites affect the success of invasive species by altering competition between invaders and local species, and by influencing the interaction between invasive predators and native prey. Clearly, an eco-evolutionary framework is needed to make progress to the field, he concluded. And finally, and most recently, Christina (2013) demonstrated that the hype is not over yet by continuing blogging on guppies and Gyrodactylus flatworms. She explained why – counter intuitively - guppies in better shape have more worms. It must be the quality of the food at the guppy sports center.

So, seven blog posts out of 109 posts so far, or 6.4% of the content of this eco-evo blog, have been highlighting parasites. I hope I did not miss any. Two posts (Andrew and Victor;  1.8% of this blog) explicitly mention that parasites might be important in the context of eco-evolutionary dynamics.  There are good reasons for that. First, parasites often represent strong selection pressures, in some cases by affecting survival (natural selection), in other cases by influencing mate choice (sexual selection). Strong selection pressures facilitate eco-evolutionary dynamics, as it might cause evolution to occur fast enough to influence ecological processes. When parasites target the same host trait by both natural and sexual selection, host adaptation and speciation might even be accelerated with the help of Harry Potter (i.e., magic trait evolution, for more on this see Ben, 2011. Ben is now cited twice!). An opportunity for eco-evolutionary dynamics would occur when hosts are under such strong selection by one parasite species, that they evolve defenses or avoidance behaviors that have a measurable effect in real time on the infection risk by (and hence the happiness of) other parasite species.

Harry Potter is not the only fiction which might influence host-parasite interactions. There is also the Red Queen. As already mentioned by Felipe, parasites might be involved in co-evolutionary arms races with their hosts, and these arms races can be considered special cases of eco-evolutionary dynamics. In the case of “Red Queen” dynamics, hosts and parasites are interacting in a feedback loop in which they both need to keep  ‘running’ (i.e., evolving phenotypes) to ‘keep in the same place’ (i.e., maintain population size). An example in the water flea Daphnia can be found here. Such dynamics are not inevitable, but the likelihood increases when the parasites are reasonably virulent, and perhaps when they have no other options. Ectoparasites such as Gyrodactylus flatworms and Philornis maggots might be virulent, but often have other options too. Philornis has a low host specificity, so it can easily start laying its eggs in nests of other bird species, which then dampens their selective impact on single host species. Gyrodactylus species as those on guppies are often highly host-specific, but often successfully trace the weaker host individuals – as suggested by Christina (2013). This way they escape Red Queen dynamics by fighting the battle not at the evolutionary level, but at the ecological level.

It is about time to quit my job as a reviewer, of course not without stressing that much more blogging is needed to really understand what roles parasites play in the intersection between ecology and evolution. So keep bringing them on, those wormy posts!  And perhaps one day we can write a real review about eco-evolutionary dynamics and parasites. Writing this review also distracted me a bit from the initial reason why I started blogging. I just wanted to parasitize on this blog to advertise a new parasite paper. However, blog readers tend to escape blogger-reader coevolutionary dynamics by clicking on the various links inserted in the text . So, I assume by now you all ran into a computer virus, even though I warned you. That’s why  I will keep this paper for a later post. This will allow you to update your virus scanner, and will allow me to cite my own bloggy worm review.
By Joost Raeymaekers - February 22, 2013