It may seem dead obvious to most of us that preserving biodiversity is the most important legacy that we can leave to future generations – but it turns out that most of us is not the same as most of everybody. Instead, it seems that a large segment of everybody thinks that biodiversity conservation somehow trades off with prosperity to the extent that preserving biodiversity will decrease human well being. This recalcitrant segment of humanity often strongly influences government policy, and so biodiversity scientists have sought convincing arguments for why biodiversity is valuable and important. One example is bioprospecting: many chemicals found in nature have proven beneficial to humans and we can only assume that more such chemicals are out there waiting to be discovered. We must therefore save biodiversity in hopes of gaining those benefits before the species that could provide them go extinct. Another big idea is ecosystem services.

Arguments from ecosystem services embrace the notion that organisms in natural environments make crucial contributions to ecosystem functions that directly and immediately benefit humans, with particularly ubiquitous examples being clean water, productivity, nutrient cycling, and pollination. An immediately obvious limitation of a strict application of this argument is that it might suggest we should simply identify those valuable organisms and preserve them without worrying about the (expensive) rest. But maybe the rest are providing key ecosystem services that we aren’t yet aware of, or maybe they are somehow critical to the dynamics of the species providing known ecosystem services. In recognition of these possibilities, biodiversity scientists have spent considerable time establishing that biodiversity per se enhances ecosystem function – with some of the most compelling evidence coming from experiments that showed greater species diversity (of grasses for example) improves ecosystem function (higher total productivity for example).

The relationship between biodiversity and ecosystem function is not universal, linear, or (often) particularly strong. For me, the most in-your-face demonstration of ambiguity is that clean water (for example) can be found from the tropics to the Arctic despite the fact that species diversity differs by orders of magnitude. (And I can’t help but think of those images of Afganistan with lots of people walking about but not a plant or source of water in sight.) Moreover, many of the ecosystems from which we now obtain our clean water are incredibly impoverished compared to what they looked like centuries or millennia previously. So ecosystem services can be maintained – or perhaps even enhanced (clean water is perhaps hardest to come by in the tropics) – through decreased species diversity.

I suspect that weak and inconsistent relationships between biodiversity and ecosystem function are symptomatic of the reality that biodiversity also provides ecosystem disservices.  Some species are just flat-out bad for clean water, productivity, nutrient cycling, and pollination. And, of course, many species are unequivocally bad for humans in general, most obviously a number of diseases. So perhaps we have, on the one hand, a positive relationship between biodiversity and good aspects of ecosystem function (services) but also, on the other hand, a negative relationship between biodiversity and bad aspects of ecosystem function (disservices). The product of these two lines yields the optimal level of biodiversity, right? Let’s manage for that – problem solved!
It would be complete nonsense to actually manage in this fashion but the absurd point highlights some difficulties of using ecosystem services as the primary argument for biodiversity conservation. In particular, focusing on ecosystem services seems to more obviously argue for the preservation of particular species and the elimination of other particular species (at least when we know which those  bad species are). This brings to mind a currently controversial topic in ecology and conservation biology: “assisted migration” or “assisted colonization.” This is the idea that – particularly under climate change – the optimal conditions for some species will be shifting from their current location to some new (perhaps more northward) location, and that species might have trouble moving to those new locations owing to limited dispersal ability or man-made or natural barriers. For these species, the argument goes, we should get off our butts and actively move individuals to the more appropriate location. The counterargument is that this tantamount to intentionally introducing species to locations where they did not previously exist and the long history of negative impacts of invasive species suggests that this is bad for biodiversity and productivity and services.

Assisted colonization buys into a hands-on approach to management. Another hands-on approach might be called “assisted elimination” (or assisted extinction or assisted extirpation). Acknowledging ecosystem disservices provided by particular species, perhaps we should actively seek out and exterminate those species. We did this for small pox and we try to do it for invasive species or pests all the time. This seems like a pretty sure-fire management strategy given that we can all surely agree on particular species that are just straight-up bad and without which the world would be a better place: HIV, TB, lyme disease, malaria, dengue, mosquitoes, rats, poison ivy (at least near my house), small yappy dogs (particularly my neighbor’s) … Hmmm, mosquitos do many things in the environment and are critical to the existence of a number of other species, such as some bats, dragonflies, and birds. So are mosquitoes or poison ivy or rats really a disservice? What is their optimal diversity or abundance? How would their service-disservice lines intersect? We are on the edge of a slippery slope here.

The point of this post isn’t to argue that we should promote management strategies based on the acknowledgement of ecosystem disservices or that we should or shouldn’t promote assisted elimination. It is instead intended to illuminate the difficulty of making arguments for biodiversity preservation solely from a consideration of ecosystem services – and also to help remember the limitations of a hands-on approach to management. We just know too little. What we really should be doing is preserving biodiversity per se – specifically because of our ignorance. And the best way to preserve biodiversity is to preserve habitats and (yes, Andy) their connectivity.


(The ideas in this post were motivated by discussions at the just-finished DIVERSITAS EcoEvol workshop held at McGill’s Gault Nature Reserve in Quebec, Canada. Participants included myself, Andrew Gonzalez, Paul Leadley, Cornelia Krug, Makiko Mimura, Talisker, Bob Holt, Mark Kirkpatrick, Jon Bridle, Luc De Meester, Dominique Gravel, Jonathan Davies, Virginie Millien, Ulrich Mueller, Highland Park, Justin Travis, Jessica Hellmann, William Godsoe, Mark Urban, Brian McGill, and Rob Coulautti. I am quite certain that many of the other workshop participants will disagree with the ideas expressed in this post and so I hope they will provide comments that devastate what I have here suggested.)
By Andrew Hendry - September 22, 2012

Unravelling little mysteries in the genome of Atlantic salmon

Salmon have always been part of my life. I grew up along the Miramichi River in New Brunswick, Canada, which is a river that is famous for i... 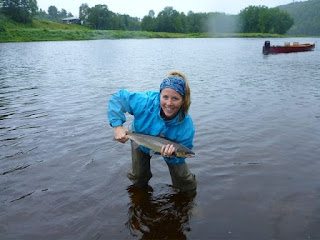