One of the things that Darwin found so striking about the Galapagos was the tameness of the fauna. He tells many stories about how various animals simply had no fear of humans. A small boy sat beside some water and hit finches with a stick until he had his dinner. Darwin caught a marine iguana and threw it into the ocean and it swam right back to him to be thrown in again – and again – and again. Not to mention the hawks that perched on a person’s head, tortoises you can ride on, and so forth. Darwin attributed this innocence to the lack of prior experience of Galapagos fauna with humans – as opposed to mainland fauna that won’t let humans anywhere near them. In his Voyage of the Beagle, he wasn’t very explicit about why this difference might have arisen – that is, he didn’t provide a formal evolutionary explanation. But that is, clearly, the reason. Animals that live with humans evolve to be afraid of them because genes for being afraid confer life and are thereby passed onto the next generation. Of course, animals can also learn to avoid humans but this learning ability is still often an evolutionary response to human depredation.

Galapagos fauna are still very tame despite now having several centuries of evolutionary experience with humans. You can still walk within several feet of a finch or iguana or tortoise, although hitting them with sticks or throwing them in the water or riding on them is certainly no longer a common activity. So it seems that Galapagos fauna have not evolved to avoid humans despite being persecuted by humans on the Galapagos for centuries. Or have they? Perhaps they have evolved and our perceptions are subject to something like the “shifting baseline” phenomenon. The shifting baseline refers to the fact that we tend to think the state of the recent past is what is normal – when it might be anything but. Thus, we might think that we should recover our fish stocks to levels seen in the 1950s (or whenever) because we think those were the “right” levels based on our past experience when, really, they were much higher even earlier. In essence, our baseline for what is “normal” gets reset each generation by our own experiences. In the case of Galapagos tameness, maybe the baseline (what we are used to for tameness based on our experience with mainland fauna) isn’t shifting, and maybe the Galapagos fauna are getting less tame, but maybe they are still so much more tame than the baseline that we don’t notice. I suppose we could call it the “distant baseline” phenomenon. 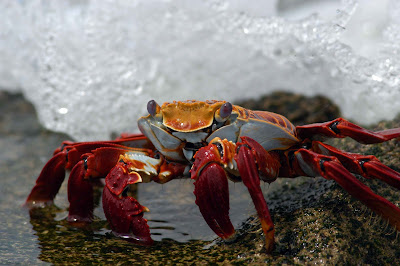 So how would one escape from this baseline constraint? One possibility might be to compare Galapagos fauna at places that have more or less human activity. In my first few years at Galapagos, I tried very hard to get pictures of Sally Lightfoot Crabs, those beautiful red crabs that dot the lava along the ocean as they pick away at the algae on the rocks. But at the site I was staying, beside the town of Puerto Ayora, it was really hard. Whenever I got close, they would leap away to a new rock or scuttle under it. I never got a good photo – although I was really impressed by their agility. A few years later, I started doing work at Borrero Bay, a site on the north side of the island away from any human influence. All of a sudden these crabs were everywhere and I could just walk right up to them. I soon had hundreds of photos with a crab almost filling the frame (above). I would often have to back up because my telephoto lens wouldn’t focus close enough.

This difference in crab behavior between a site with lots of humans (Puerto Ayora) and a site without humans (Borrero Bay) got me to thinking that perhaps the crabs at the former have indeed evolved to be scaredy cats. My initial thought was that dogs chased and killed them but I am also now told that humans hunt and eat them or use them for bait – or at least they used to. How has this difference arisen? Has there been genetic divergence in behavior between the two sides of the island? This might be surprising as these crab larvae are presumably pelagic and so might expect to be a single mixed population on that scale. Or are we now seeing the activation of learning behavior that has evolved elsewhere in these crabs and been retained following their colonization of Galapagos? Anyway, this was the state of my thinking until yesterday. 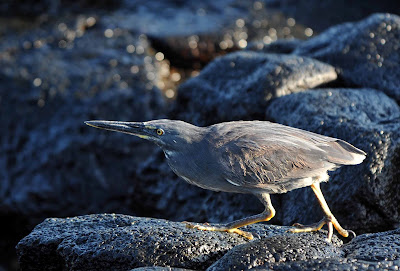 Yesterday I took a walk out on beach by Puerto Ayora and the crabs were still very shy. But this time, I noticed several small lava heron stalking them (above), and dashing out in an effort to catch them – I didn’t see any successes. Could it be that herons are more common here than at Borrero and have driven the divergence in behavior? Or could it be that herons have caused the evolution of learning to avoid two-legged things on the beach in the Galapagos in general, and this is simply then turned on at Puerto Ayora owing to the commonness of humans. The other observation was that the crabs were, in fact, very tame (below) at a small site on the grounds of the Charles Darwin Research Station beside Puerto Ayora (although not nearly as tame as at Borrero). Non-station people are not allowed at this site and crab persecution is presumably very low – but the herons are present. So maybe this supports the human effect hypothesis. But at the same time, it suggests that the effect must be due to learning (evolved though it might be) rather than genetic differences between sites – as the differences were on a very small scale.

So what will happen in the future? If the changes are caused by humans, then I would expect the tameness to come back – since humans are no longer allowed to kill native Galapagos critters. Maybe we are starting to see this at the research station. Anyway, it is a cool problem that I hope someone looks at some day.

More:
1. The shifting baseline: http://en.wikipedia.org/wiki/Shifting_baseline
2. An example of human effects on tameness from a study of reef fish conducted by Kiyoko Gotanda, now a PhD student in the Hendry lab: http://www.springerlink.com/content/a541271237060604/
By Andrew Hendry - March 08, 2012