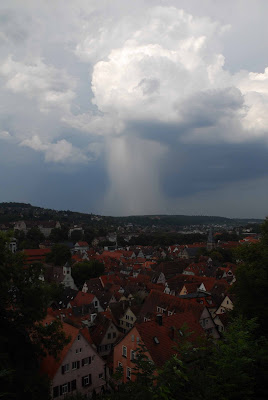 I recently spent four days at the meeting of the European Society for Evolutionary Biology (ESEB) in Tubingen, Germany. A pleasant surprise was that the meetings were very eco-evolutionary, at least from the perspective of how ecology drives evolution. Lots of talks were given on ecological speciation, interactions between natural and sexual selection, phenotypic plasticity, and the genetics of adaptation. So I had no shortage of talks that I wanted to attend. At one point, five people I wanted to see were talking simultaneously. As the storm clouds gather over Tubingen, however, what I really want to do in this post is rail against a communication problem between the practitioners of a particular field of study and the rest of the evolutionary community.

A contemporary debate in evolutionary biology, and indeed in biology in general, surrounds the genetic basis for adaptation and speciation. Is adaptation the result of many genes of small effect, as Fisher famously declared, or is it instead the result of relatively few genes of large effect? The many-small view held sway for much of the last fifty years – notwithstanding a number of examples of genes that had large phenotypic effects. More recently, however, increasingly powerful molecular methods have led to a seeming sea-change toward the few-large view. In particular, the discovery and characterization of specific genes with large effects on adaptive phenotypes has led a fair number of biologists to now assert that Fisher is dead in both senses, and that we now finally see the world of adaptation in its true – oligogenic – form. This is nonsense – but I can see where it comes from.

Every time I attend a scientific conference – and this year’s ESEB meeting was no exception – most talks on the genetics of adaptation report a search for THE GENES that determine adaptation: sometimes they find such genes and, if not, become apologists for failing to do so. (And published papers are the same way.) This gives the audience the impression that studying the genetics of adaptation must involve a search for THE gene that underlies divergence in the trait. What is often lost on the audience is that investigators normally screen large number of traits for large effect genes and then specifically choose – for practical reasons – to focus only on those of largest effect. In addition, it is often forgotten that Fisher’s assertions were about ADAPTATION per se, not adaptive TRAITS. In general, adaptation to different environments in nature will involve many traits (life history, morphology, physiology, behaviour) and, even if one or two traits within these classes are indeed mainly oligogenic, those same genes will almost certainly contribute to only a small proportion of the variation in overall ADAPTATION.

As just one example, Rowan Barrett gave an outstanding talk about natural selection on EDA, a gene that strongly influences variation in lateral plate number of stickleback fishes, which differ dramatically in this trait between freshwater and marine populations. This work on EDA, along with Hopi Hoekstra’s work on MC1R in field mice, represent some of the best-characterized effects of a single gene on selection and adaptation in natural animal populations. However, EDA gives a misleading picture of overall adaptation to freshwater. For example, genome scans for evidence of divergent selection across the whole genome (work from the lab of Bill Cresko and others), and studies of gene expression (such as by the groups of Louis Bernatchez and Juha Merila), show that adaptation to freshwater in stickleback clearly involves many – probably hundreds – of genes. Thus, while EDA may explain a substantial fraction of the variation in lateral plates, it will not do so for overall ADAPTATION. And similar data on the polygenic nature of adaptation is accumulating from similar studies of other organisms, such as whitefish, mosquitoes, walkingsticks, and so on.

So every time I hear one of those “THE GENE FOR” talks, I can’t wait to corner the author later at the pub – plenty of those in Tubingen – to ply them with fine ales and regale them with polygenic tales. Recently, I have been able to debate the many and the small with Rowan, Hopi, Katie Peichel, David Kingsley, and Dolph Schluter. It turns out that all of the above points are recognized and embraced by these investigators. That is, people actually studying the genetics of adaptation to divergent environments in nature believe that it involves many genes of small to modest effect. It is just that they are specifically studying only those few of largest effect – and it is much easier to study the genetics of a few traits than of overall adaptation to a given environment.


It really is a many-small world after all.