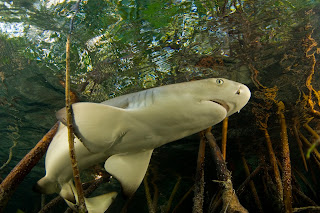 Little is known about the potential for adaptive evolution to save natural populations faced with environmental change, despite an increasingly present human hand in modifying their environment. These modifications likely reduce the degree to which populations are adapted to their local conditions, thereby decreasing mean fitness and possibly leading to local extinction. Such adaptive processes depend on several factors such as population connectivity, initial population size, mortality rates, adaptive plasticity (or maternal effects), genetic variation, and the strength and form of selection. And yet few studies to date assess if and how each of these factors has changed in the face of anthropogenic forces.
A recent paper from the Hendry lab attempted to fill this gap by combining long-term monitoring (13 years) of marked lemon sharks (Negaprion brevirostris) at an isolated nursery lagoon (Bimini, Bahamas) with genetic pedigree reconstruction (DiBattista et al. 2011, Evolutionary Applications 4[1]: 1-17). DiBattista et al. (2011) assessed whether habitat loss influenced population size, juvenile mortality, maternal effects, genetic variation, and selection in this lemon shark population. This analysis was only possible because recent human activities (i.e., mangrove removal) associated with a large-scale development project at Bimini conveniently bisected their dataset. Contrary to expectation, they found that samples after the disturbance (relative to before the disturbance) showed an increase in 1) the number of sharks breeding at this site, 2) neutral genetic variation, and 3) additive genetic variation for several key juvenile life-history traits (i.e., body size and growth). They also found a dramatic change in selection acting on those same life-history traits; habitat loss here appears to have changed which phenotypes are now favored by natural selection.
The authors therefore conclude that some species may be tolerant to some habitat loss, although this likely depends on the length and duration of the disturbance. Similarly, high levels of gene flow among population may act to buffer losses in neutral and additive genetic variation, and in some cases increase it. Based on the observed changes in the strength and sometimes direction of natural selection acting on life-history traits in this population, it would seem that habitat loss may impede adaptive processes by altering the fitness landscape.
Joseph DiBattista (NSERC postdoctoral fellow at the Hawaii Institute of Marine Biology, University of Hawaii)
Photo Credit
DiBattista JD, Feldheim KA, Garant D, Gruber SH, and Hendry AP (2011). Anthropogenic disturbance and evolutionary parameters: A lemon shark population experiencing habitat loss. Evolutionary Applications 4(1): 1-17.
(http://onlinelibrary.wiley.com/doi/10.1111/eva.2010.4.issue-1/issuetoc)
Photo Credit: Matthew Potenski (http://www.matthewpotenskiphoto.com/)
*Save one, none of the other authors were bitten, maimed, or otherwise harmed during the tagging of said lemon sharks.
By Joseph DiBattista - December 08, 2010