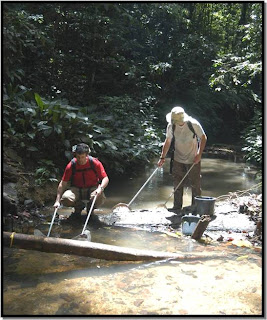 Along with my co-authors, I used a series of mark-recapture experiments to investigate variation in natural selection on body color in Trinidadian guppies. Among-population variability in male colour is predicted to reflect a balance between the benefits of colour (attracting females) and the costs of colour (attracting predators). consistent with this idea, our natural selection coefficients were negative, colourful guppies generally had lower survival than did drab guppies. However, we also found that selection in this system is highly variable both spatially (among populations) and temporally (within the same population). Surprisingly, this variation was not consistently associated with the presence of dangerous guppy predators. These findings suggest complicated and dynamic interactions among sexual selection, natural selection, predation, and phenotypic evolution in this system. These types of interactions operating on very fine spatiotemporal scales suggest that eco-evolutionary dynamics may be commonplace, and relevant to ecological processes occurring in contemporary time.
By Dylan Weese - April 11, 2010